Melbourne Boomers guard Maddie Garrick is expected to play in her team’s Melbourne Cup Eve game despite a health scare over the weekend.

The shooting guard was helped from the court in the final minutes of the team’s 101-75 win over Dandenong Rangers at Dandenong on Saturday, after suffering from a shortness of breathe and tingling in her left arm. 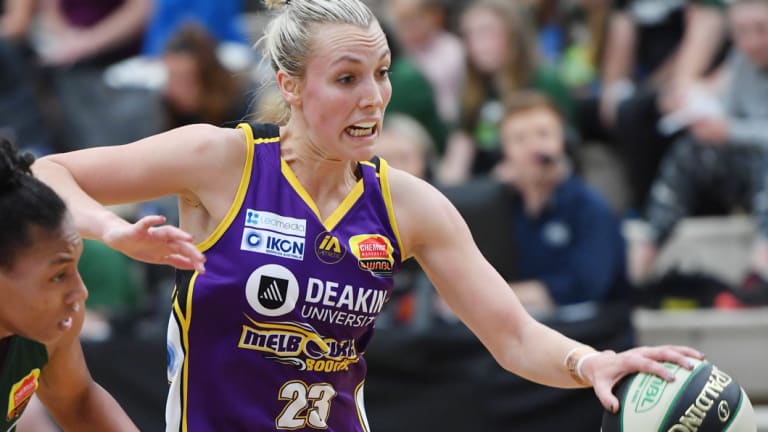 All clear: Boomer Maddie Garrick given the go-ahead to play in Monday’s Cup eve clash against Bendigo Spirit.Credit:Joe Armao

The 26-year-old was treated by ambulance officers post-game for what appeared to be a blood pressure issue, and she was taken to hospital for tests, despite leaving the stadium smiling and chatting with family and friends.

The tests proved inconclusive, so Garrick was cleared to rejoin the Boomers for during their shoot around practice on Sunday.

The Boomers first created the Melbourne Cup Eve game four seasons ago and the past three years have enjoyed bumper crowds for the game.

Some years they have played at the same time as A-League club Melbourne Victory but this year NBL club Melbourne United have pinched the idea booking their first game against Andrew Bogut’s Sydney Kings for Monday night.

Nelson said he wasn’t angry with Melbourne United and the Boomers still expected a big crowd for Monday’s game despite the NBL game being a sell-out.

“It’s flattery, isn’t it?” Nelson said with a smile.

“The win is that there will be 13,000 people going to the basketball on Monday night seeing the elite level of men and women in this country, and that’s a massive win for basketball.

“This is our fourth year. It’s a massive night and we have turned it into a big event so it’s great to see Vince Crivelli [Melbourne United chief executive] and all the team at Melbourne United have come to join the party.

“I’m sure with a 10,000 plus crowd watching Melbourne United on Monday night, Vince will quite happily send me a dozen bottles of red wine.”

The Boomers have seen crowds grow each season for the Cup Eve game and they weren’t dissuaded from hosting the game again this year.

“It will be big again for us,” Nelson said.

“It is heart-warming to see the likes of Melbourne United, who are a fantastic organisation, look at Melbourne Cup Eve as a great night for families and basketball.

“I used to say Melbourne Cup eve was owned by the WNBL and I think that it’s a great thing that it’s owned by basketball, and if it can stay in Melbourne for United and Boomers every year then I’m happy with that.

“One thing you will always see with this night is that you see the supporters who are coming out and experiencing a game for the first time and that gives us the chance to put on a great show, entertain them and hopefully bring them back for future games.”