Four years ago, when starting out in the sport, Anne Stewart never imagined sailing in a major race. Now, at 19, she is competing in her first ocean race. It just happens to be the Sydney to Hobart.

As the sailing world celebrates the 76th year of the race, women in the sport are celebrating 75 years of participation in it. 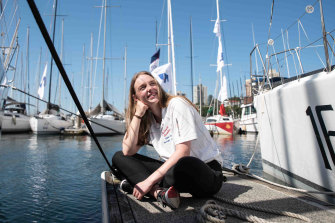 Anne Stewart had her dreams crushed last year when the race was called off due to COVID-19 in what would have been her first ocean race. Credit:Flavio Brancaleone

Stewart, who will be a crew member on Midnight Rambler, can only say thank you to those who came before her. “Looking back, I would not have even imagined I’d be here.”

In 1946, the second running of the Boxing Day classic, two trailblazing women contested the 628-nautical mile race when sailing was considered very much a man’s domain. It’s a far cry from this year’s event with more than 87 women participating across the 93-boat fleet.

The important milestone was set to be celebrated last year, but with the cancellation of the 2020 race, the anniversary is being recognised this year. However, this year’s race was hit by COVID-19 on Saturday with the withdrawal of a favourite, Willow, after four crew members tested positive.

Stewart was supposed to compete in her first Sydney to Hobart last year, after starting sailing at 15 years of age having inherited her father’s passion for boats. But the race was cancelled by the time she arrived in the harbour city from Tasmania.

“Having to fly back and quarantine after that was really devastating,” she said.

And while all the women who have come before her have helped in her journey, she also has her skipper, Ed Psaltis, to thank. Psaltis is competing in his 39th Sydney to Hobart.

“I’ve got a really experienced crew around me,” Stewart said. “They make me feel comfortable and capable in my ability, which is really nice. Being on Ed’s boat is just amazing because he has a really high standard of sailing.”

Psaltis said he is overjoyed to have Stewart on board.

The skipper of line honours contender LawConnect, Christian Beck, has two female crew members on his super maxi and hopes to employ more in the future.

“I can only talk about our boat, but we try to have as many women on board as we can,” he said.

“Women aren’t as interested in sailing as men, historically. It’s a little bit like software development. They’re not that easy to find, but we’d love to have more of them if we can find them.”