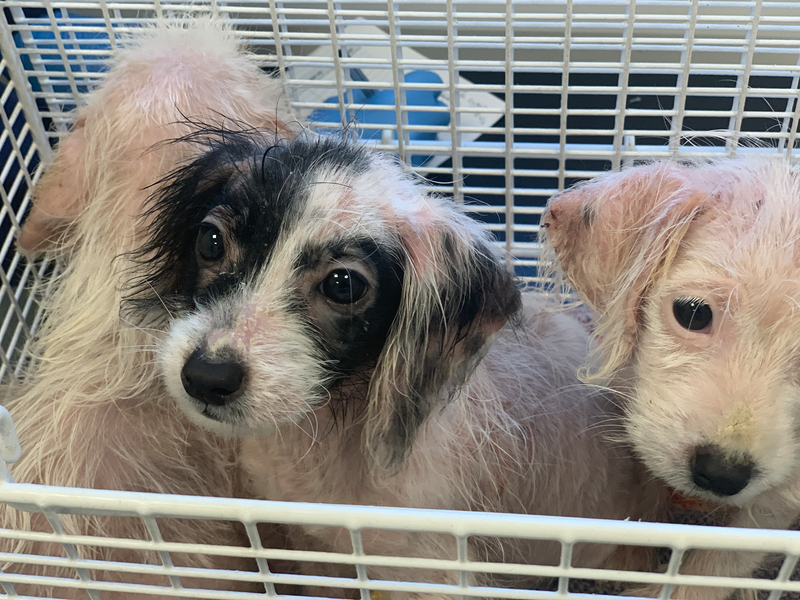 Three lucky puppies will be spending their first Christmas in loving homes today, after being found wandering the streets when they were only a few weeks old.

The trio were brought to Battersea’s Old Windsor centre in urgent need of help, with staff at the leading animal welfare charity horrified by the condition the puppies were in when they arrived in late October.

All three had lost almost all their fur and were covered in sores and dirt, as well as having problems with their ears.

After weeks of expert care from the charity’s vets, behaviourists, and foster carers, Abbie, Basil, and Josie began to develop into playful and loving puppies – each with a unique personality.

Once their skin had healed and their fur was growing back, they were ready to find homes where they could put their bad experiences behind them and start a new chapter as much-loved pets.

Craig Perera, a Team Leader at Battersea’s Old Windsor centre, said: ‘When you look at these pups now, it’s hard to believe that only a few weeks ago they were roaming the streets, unwell and unloved.

‘From the moment they arrived, our staff worked around the clock to ensure Basil, Abbie, and Josie had the best possible chance to grow in to healthy, happy young dogs, before finding them new homes where we knew they’d be loved.’

First to leave Battersea’s care was Josie, who joined her owner Tony Hallett to start a new life in Surrey. Since going home, the sensitive pup has begun to grow in confidence and loves nothing more than going for long walks with her new family.

Two days later, Abbie and Basil went to their new homes in West Sussex and Kent respectively, where both immediately became beloved members of their families.

Abbie’s owner, Robin Quinnell, said: ‘Abbie has settled in really well and has everyone wrapped around her paw! She is very cheeky but incredibly sweet and very quickly decided that her favourite spot is on the sofa. She has also bonded well with our other dog, Buddy.’

Lucy Farley, Basil’s new owner, added: ‘He’s the best puppy! We’ve found he loves watching telly, looking at his reflection and playing with other dogs. We are so thankful for him and feel so lucky!’

Now aged four months and safe and warm, everyone hopes all three puppies will celebrate many Christmases to come with families who love them.

Craig added: ‘We’ll never know exactly what led to this little family being left to fend for themselves at such a young age, but we know there’s a chance they were abandoned by an owner.

‘At Battersea we understand that people may have to face the incredibly difficult decision to give up a pet, and we would never judge anyone for doing so. We would just urge anyone no longer able to care for a pet to reach out for support from places like Battersea, rather than put a pet’s wellbeing at risk by abandoning them.’

Any owners struggling to cope with their pet should visit the Battersea website or speak to a local rescue or behaviourist for advice.