Gymnastics at the Tokyo Olympics was only ever going to be about Simone Biles.

On the final night of competition, the American made a dramatic return to the Ariake Gymnastics Centre – having sat out the events she dominated in Rio – to provide a sparkling farewell to these Games. 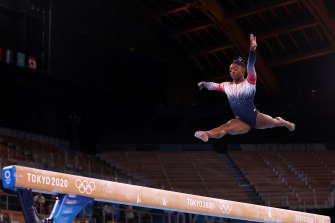 Simone Biles was back in action on the beam.Credit:Getty Images

The balance beam is Biles’ least favourite apparatus and the only one on which she didn’t win gold five years ago. But, as fate would have it, it was the only apparatus she felt safe to compete on after she was unable to remove the performance gremlins which caused her to withdraw from competition on the night of the team final.

This was not Biles at her very best but it was Biles competing again, which is all she expected from herself. “I wasn’t expecting to walk away with a medal, I was just going out there to do this for me,” she said.

“I was OK with missing finals because I knew I couldn’t do it. My problem was why my body and mind weren’t in sync? What happened? Was I over tired? Where did the wires not connect?

“That was really hard because I had trained my whole life, I was physically ready, I was fine, and then this happens. It was something that was so out of my control.″⁣

All eyes and every camera lens followed the 24-year-old American as the eight finalists walked into the arena. Dressed in a red, white and blue leotard, she performed a simplified routine with grace, power and most importantly, without mishap. 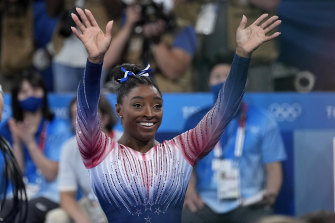 Biles was all smiles after her routine.Credit:AP

The gold went to China’s 16-year-old Chenchen Guan, a girls who describes Biles as her idol, and the silver was won by her teammate Xijing Tang. Biles surprised herself by taking bronze, her eighth Olympic medal.

It had been seven days since Biles realised, as she soared through the air off her opening vault in the team final, that something was dangerously amiss. The world’s greatest gymnast had forgotten how to twist.

On that night, she talked about needing to prioritise her mental health and “work on my mindfulness”. While this was true in a sense, she has since explained that her problem has more to do with faulty wiring than anything you would normally associate with mental illness.

In the week since, she has tried to fix the problem. She has consulted with medicos and sports psychologists. She withdrew from the Olympic precinct to train on her own at another Tokyo gym.

Whatever she tried, she couldn’t convince her body to do something it had done so instinctively since she was a little girl learning to cartwheel. Seeing all the other gymnasts do it didn’t help.

“Everytime I watch the guys and girls out there I want to puke. I cannot fathom how they are doing it. People say it is stress related. I could not tell you because I felt fine.″⁣

Gymnasts call it “the twisties;” a disconnect between mind and body that causes uncontrolled rotations. When it happens it makes gymnasts vulnerable to crash landings and serious injury whenever they attempt a spinning element.

Despite being medically cleared to compete, Biles was unable to fix the problem. To return to competition in the beam final, Biles removed the twisting element from her dismount and replaced it with a double pike somersault.

That Biles stayed in Tokyo to try to sort out work her problems tells us a little about what drives this four-time Olympic champion.

She said it was important to her to do at least part of what she had come to Tokyo to do.

Was this a farewell to more than just Tokyo?

Simone Biles will be 27 by the time the next Olympics come around. She has competed at two Olympics, won four gold medals and has 19 world championship titles to her name.

She said Paris was the furthest thing from her mind.

First, she must understand and come to terms with what happened here. “I don’t really know how I’m feeling right now,” she said.

That she did was an important step for her and perhaps, a last chance for the rest of us to see a singular gymnast who will be admired, studied, mimicked and spoken of for years to come.

Never miss a medal or great sporting moment with our Olympic update emailed daily. Sign up for our Sport newsletter here.