SERGIO AGUERO has been slammed after grabbing assistant referee Sian Massey-Ellis on the shoulder.

The Manchester City striker was arguing a throw in decision given to Arsenal when he put his hand on her shoulder. 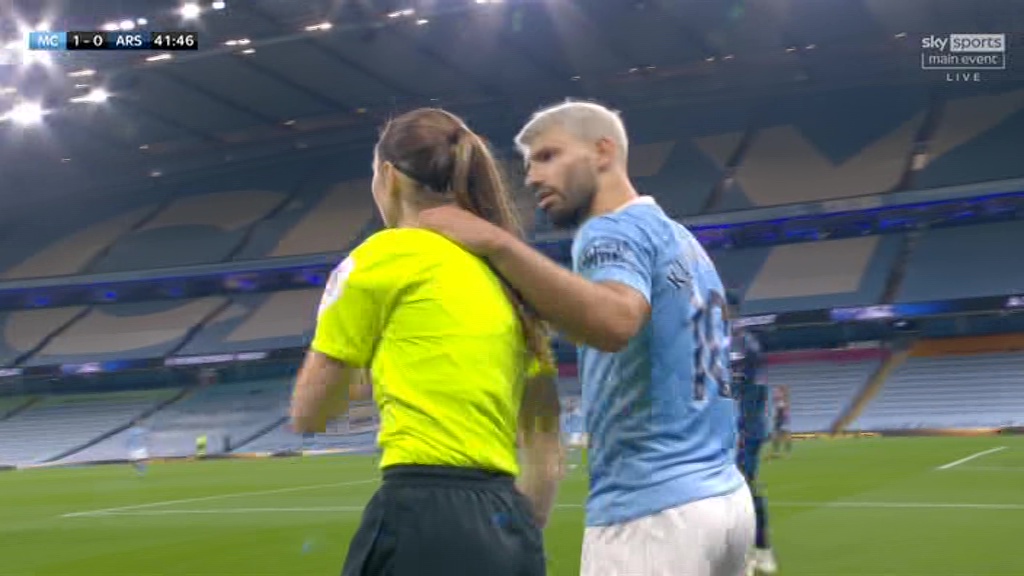 The assistant referee was then seen putting her hand up to move Aguero away from her.

The contact with brief, but in 2016 a new set of rules were brought in to protect officials.

Any physical contact with a referee or assistant warrants either a yellow or a red depending on its severity.

But Aguero will not be punished retrospectively after the FA revealed no formal action was required.

Since the incident, the player has been slammed by football fans.

Piers Morgan tweeted: "Erm, what is Aguero doing here? And why wasn’t he sent off for it?"

"No way he does that if it’s a male. Demeaning and so very wrong. Doesn’t even blink and realise what he’s done either.

"Should be banned for that." 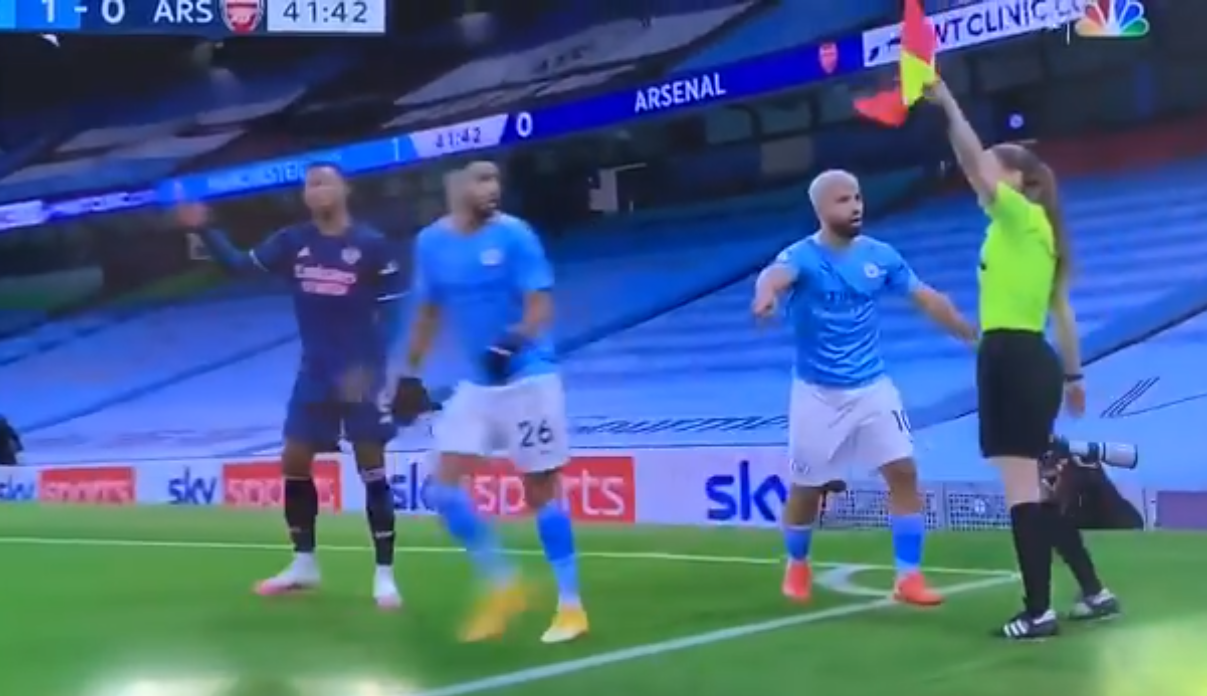 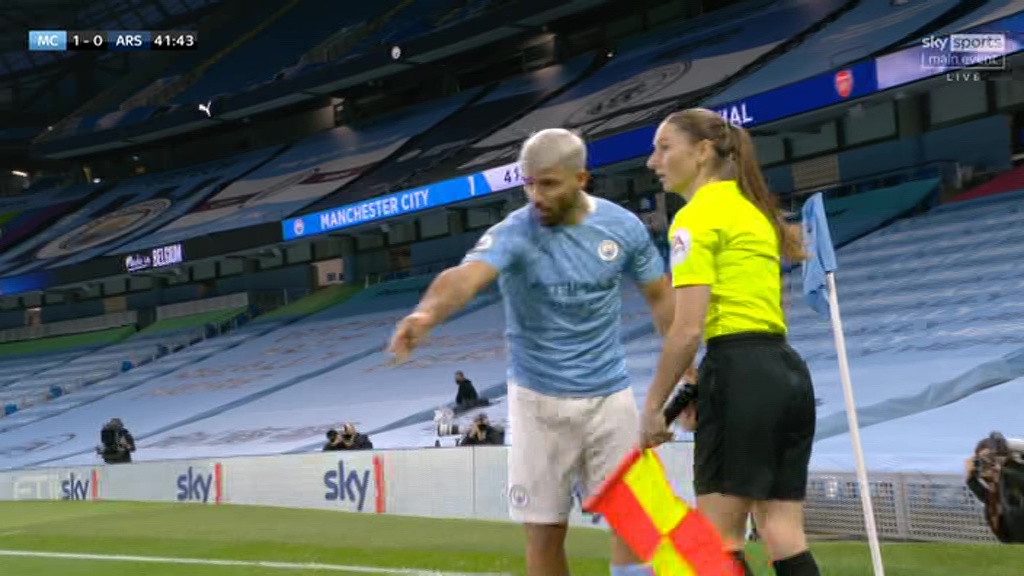 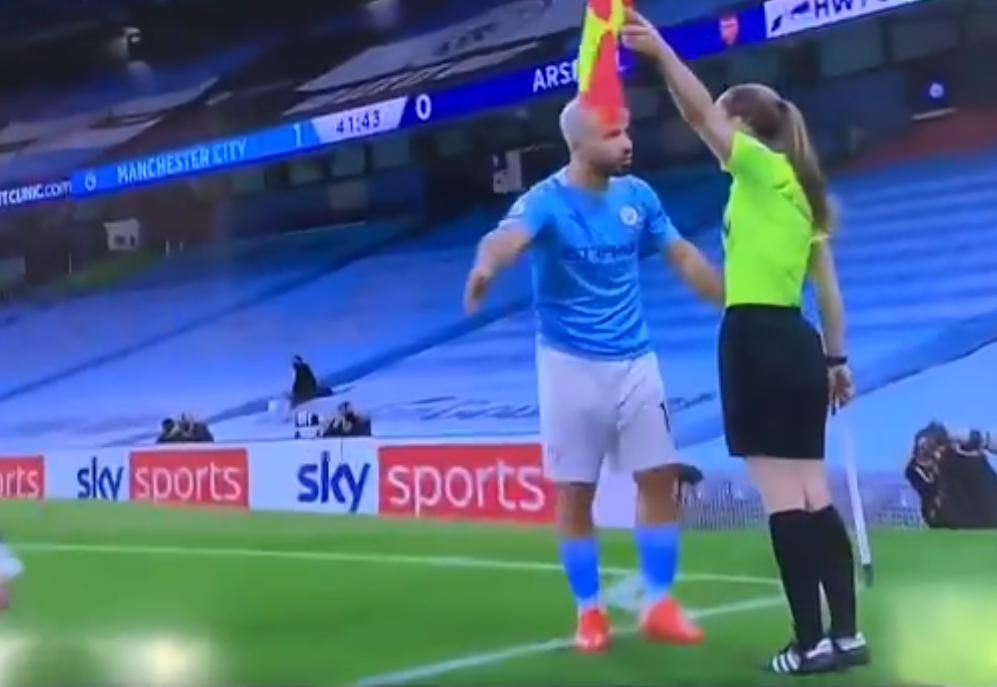 She later added: "Those complaining about calls for a ban, I know 2020 is wild, but have we really reached the stage it’s okay to grab someone by the neck like that?"

The Premier League announced the rule changes four years ago.

In a statement at the time, they said: "Premier League football, and the wider game in England, is known for being competitive and compelling, but also for its fairness and for being played in the right spirit.

"However, the English football authorities have noticed over the past four seasons that intolerable behaviour by players and managers in their competitions have reached unacceptable levels in certain areas.

"This will focus on behaviour towards match officials, with the aim of reducing disrespectful conduct such as aggressively challenging decisions or running from distance to confront an official."

Last night, Manchester City boss Pep Guardiola was unhappy to be even asked about Aguero's actions and said: "Come on guys, come on.

"Sergio is the nicest person I have ever met in my life, so look for problems in other situations and not in this one.

"We are incredibly happy Sergio is back. After four months out he is still a way from his best condition but he got 60 minutes today and that's good.

"We have another game in the Champions League on Wednesday and it's important to have him available again.

"We need his goals and we need his performances."

Fans online were quick to point out Aguero's breach of the rules.

One said: "Aguero should’ve been booked for grabbing Sian Massey-Ellis like that."

Another added: "Aguero should have been yellow carded for what he did to Sian Massey."

Massey-Ellis, 35, is one of football's most high-profile female match officials and has been involved in Premier League games since 2010. She was awarded an MBE for services to football in 2017.