BRIGHTON booked their FA Cup semi-final place with a penalty shootout – after an amazing late comeback at the Den.

The Seagulls were 2-0 down in the 88th minute as goals from Alex Pearce and Aiden O’Brien put the Lions on course for Wembley. 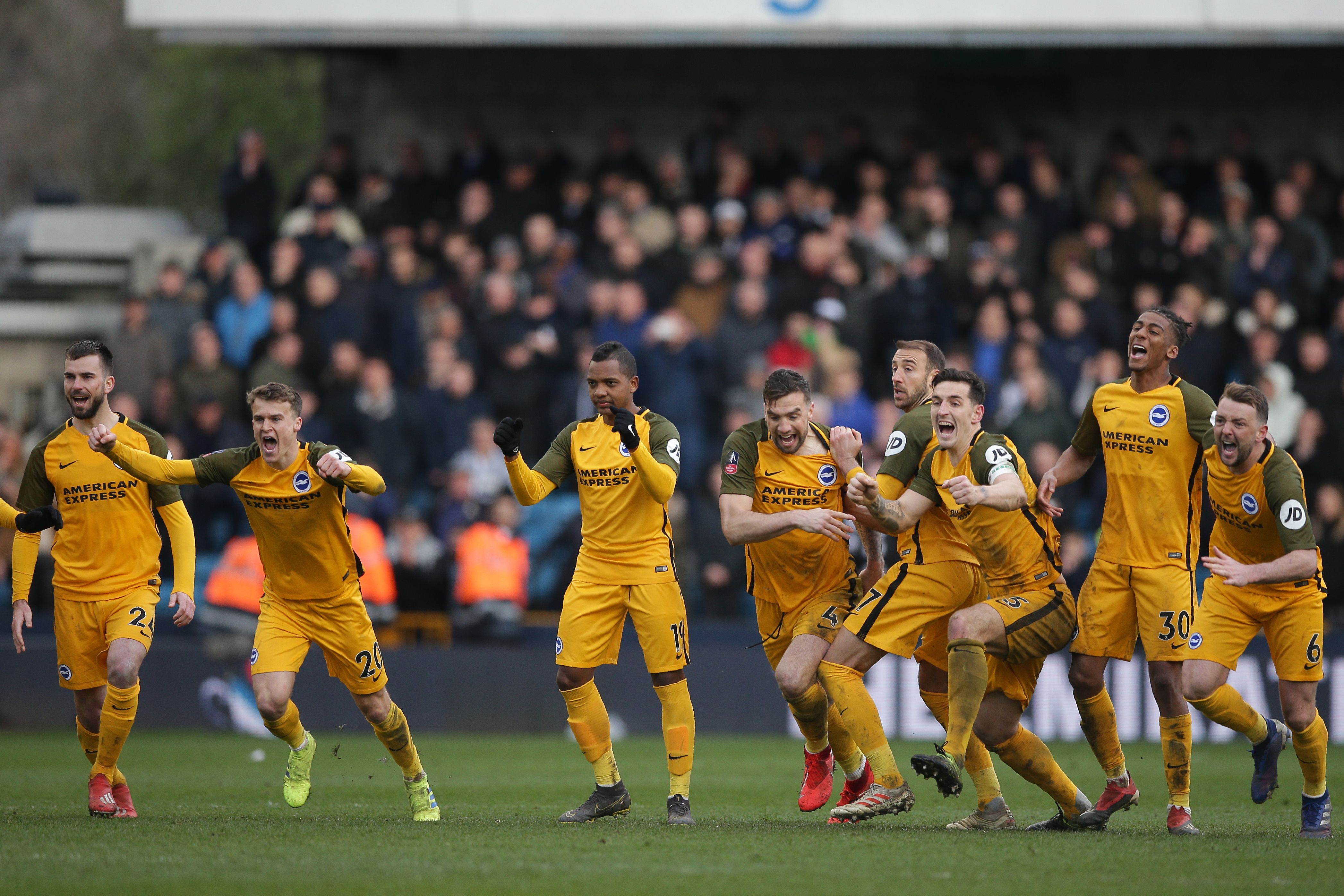 But Jurgen Locadia’s strike gave Albion hope and a howler by Millwall keeper David Martin, who let Solly March’s squirm through his grasp in the fourth minute of stoppage time saved the day for the visitors.

Shane Ferguson was sent off for the Lions in injury-time before their defender Jake Cooper’s miss in the shootout sent the Seagulls through to their first semi-final since 1983.

Millwall got their fans’ juices going before kick-off by playing a montage of their recent FA Cup heroics on the stadium’s big screen.

For a club which have spent just two seasons in the top flight in their 131-year history their pedigree in the famous old competition is outstanding. 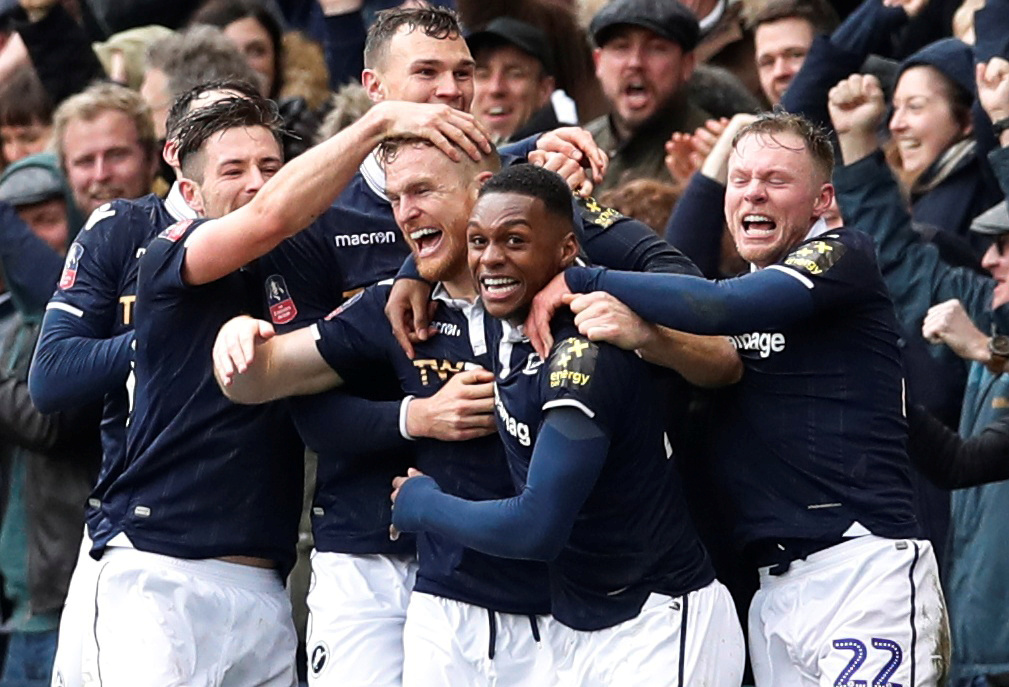 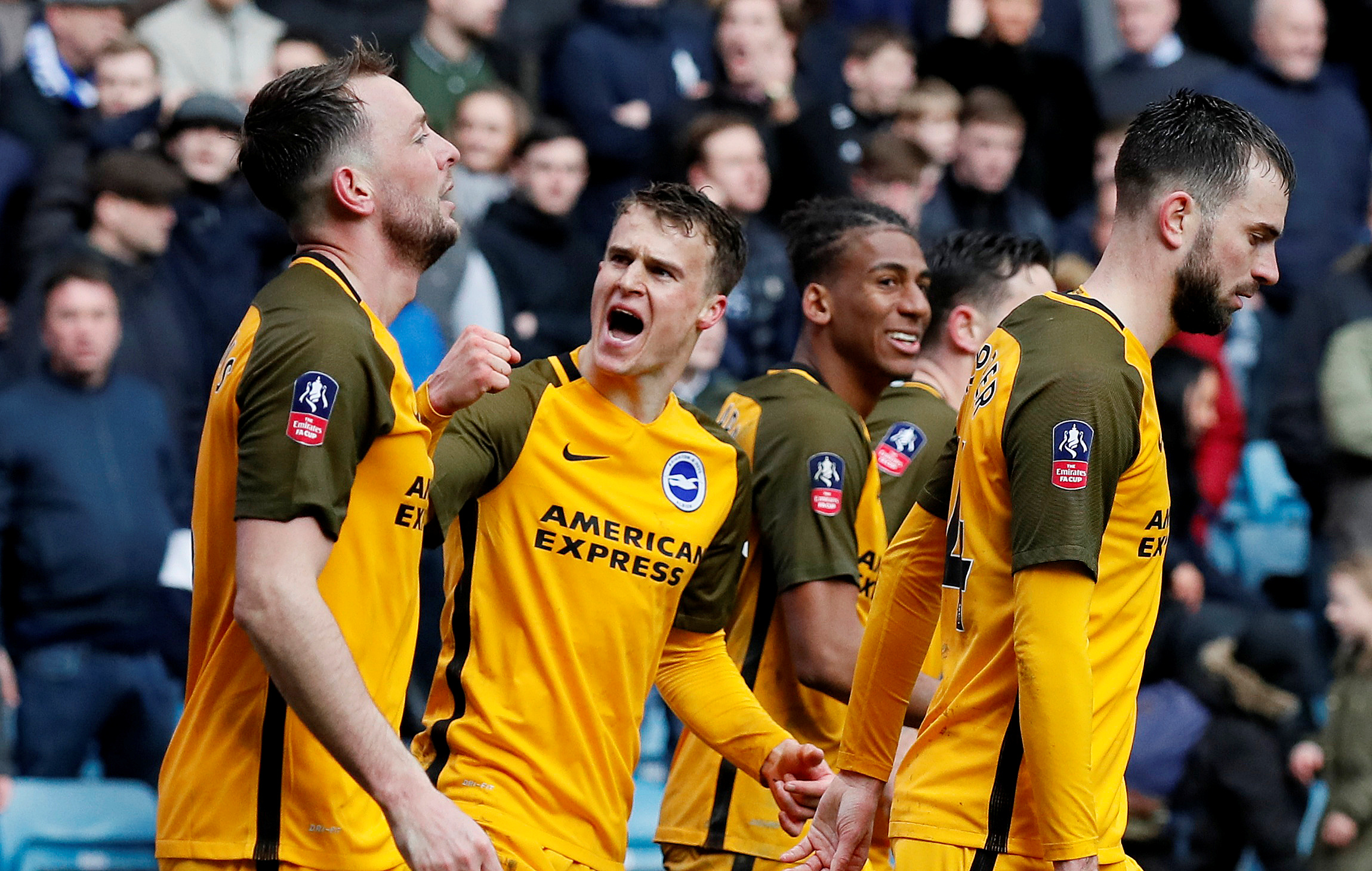 Having lost 3-0 Manchester United in the 2004 Final this was the Lions’ third quarter-final in the last seven seasons.

The previous five Premier League teams to visit in the FA Cup had all been KO’d.

Seagulls stars were unable to settle as the Lions hunted them down in packs. 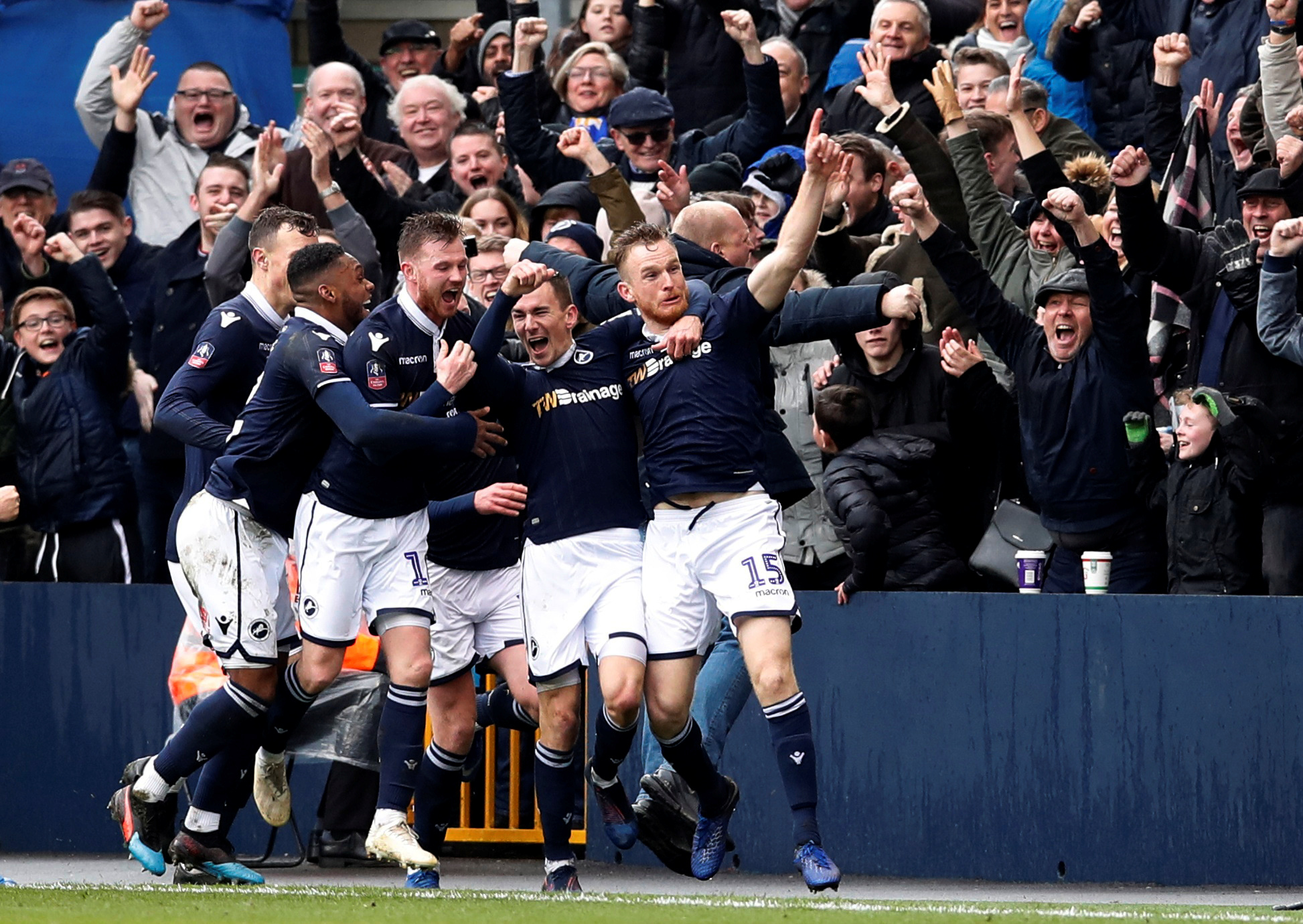 But it was the visitors who had the first serious attempt on goal when Beram Kayal’s shot from the edge of box was saved at the second attempt by Lions keeper David Martin after the hosts had failed to clear a Davy Propper cross.

Millwall responded immediately with Lee Gregory hooking shot over the bar after Jake Cooper had headed down a free kick in the box.

A weak Kayal header, comfortably held by Martin, was the only other incident of note in a poor first half that would have had even most fervent of armchair fans dreaming of the EastEnders omnibus.

Hopes were not high for the second half but an early mix-up in the Albion defence between Ryan and centre-back Shane Duffy – which saw the keeper’s clearance rebound off the centre-back and almost into the net sparked this tie into life.

And as the sky turned black and a wintry storm soaked the Den, the noise levels from the home stands increased and the forecast for this clash suddenly became brighter.

Kayal, Brighton’s most dangerous, player had another long-range shot beaten away by Martin.

Then Millwall went straight up the other end and Jed Wallace had a shot blocked by Ryan.

As well as rain, the storm had brought in with that familiar scent of a cup shock. 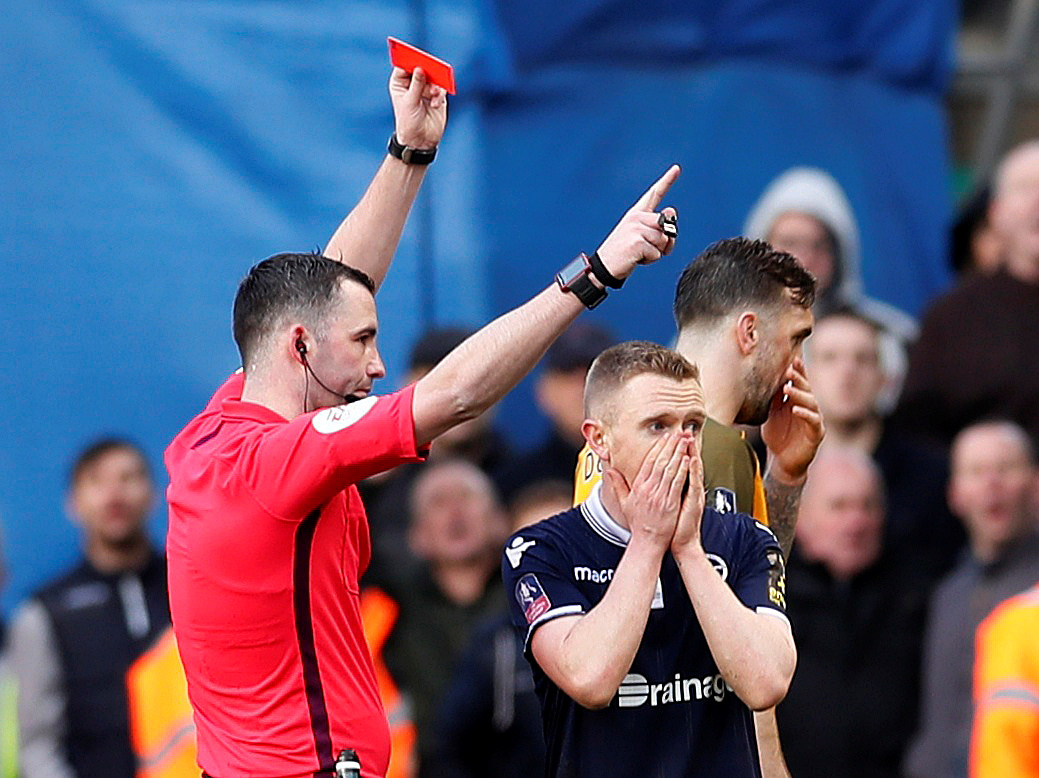 And Brighton were left feeling under the weather Pearce rose to head home Shaun Williams’ corner in the 70th minute to send the Den into the delirium.

That turned into absolute pandemonium nine minutes later when Wallace crossed for O’Brien to tap in the Lions’ second.

“Manchester City, we’re coming for you” came the chant from the Millwall fans.

But as the storm cleared the football gods decided to unleash a cruel thunderbolt on the Championship strugglers as out of nowhere Locadia, sent on for Anthony Knockaert in the 73rd minute pulled one back for Brighton with a ferocious shot with just two minutes of normal time remaining.

And when Jose Izquierdo fired a shot straight into Martin’s arms it seemed the Lions were home and hosed.

But with just seconds of the four minutes of stoppage time Brighton were awarded a free kick out on their right around 40 yards from goal.

As Seagulls filled the box March appeared to overhit his delivery as Millwall keeper Martin lost his positioning and ended up touching a free kick he thought was going wide into his own net.

It was the turn of the 2,300 travelling fans to celebrate as Millwall stars and fans were left stunned. 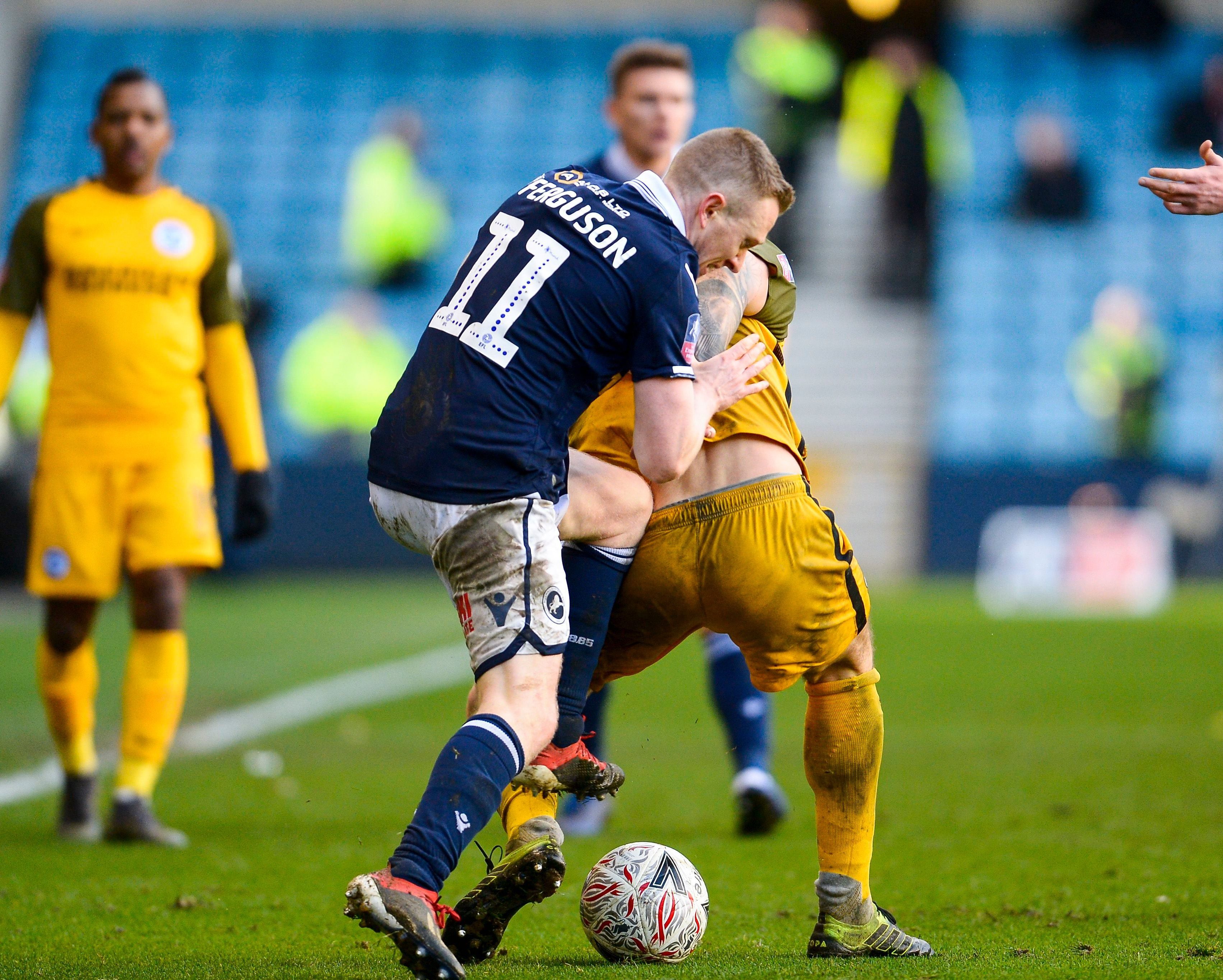 Not as disappointed as those Albion supporters seen heading for the exit with their team 2-0 down.

Especially as their manager Neil Harris had taken off his three of his key players – O’Brien, Wallace and Gregory – in the last five minutes in an attempt to run down the clock.

With a shellshocked home crowd stunned to silence Brighton by rights should have put the match to bed in an extra-time, but did not.

And Millwall’s misery was compounded when Ferguson was shown a straight red for kicking out at Dunk.

Lions fans tried to rally their stars for the shootout and hopes were raised when Glenn Murray hit the post with Brighton’s first kick and Williams scored.

Locadia and March then netted their spot kicks as did Ryan Tunnicliffe and Ryan Leonard for Millwall.

But it turned sour for the Lions as Propper scored and Mahlon Romeo saw his one saved by Ryan.

Dale Stephens and Steve Morison scored to keep the shootout score level at 5-5.

But after Dunk found the net, Cooper blazed over to seal Brighton’s dramatic win.