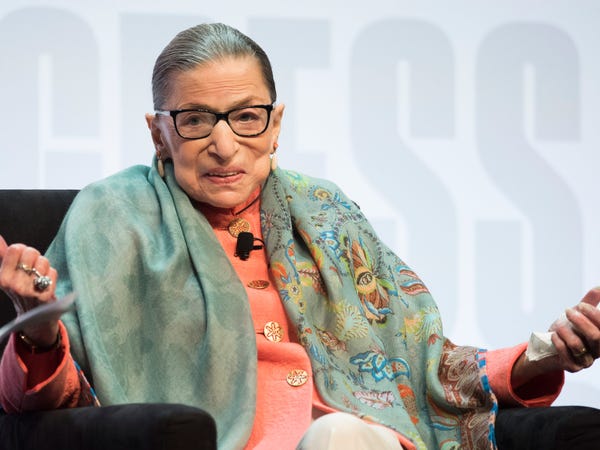 Late Supreme Court Justice Ruth Bader Ginsburg will be remembered as a champion of women and minorities after leading the charge for progress throughout her 27 years serving on the country's highest bench.

But even in the midst of shaping a nation, RBG "wasn't beyond a bit of mischief," according to one of her former clerks.

On Sunday, University of Michigan law professor Scott Hershovitz — who worked under Ginsburg from 2006 to 2007 — recounted a story on Twitter in which the ordinarily stoic justice agreed to talk some smack towards fellow Supreme Court Justice Samuel Alito.

Hershovitz was one of many clerks who participated in a court-wide fantasy baseball league during OT '06. Justice Alito — a known baseball enthusiast — insisted on running his own team, and he faced off against the Ginsburg clerks during the final week of the term. Team Ginsburg took down the conservative justice 10-0, and the following day, Hershovitz decided to brag about the chambers' victory with none other than RBG herself.

Ginsburg knew nothing about fantasy baseball — in fact, Hershovitz twice had to explain the game to the justice in the course of their conversation — but she agreed to sign a gloat-filled memo poking fun at Alito's considerable loss. She also agreed to have copies of the memo distributed to each of the court's justices.

Alito sent a response promising to pick up his performance once the term ended. However, Hershovitz recalled one of his clerks calling to complain after being asked to take over the justice's team shortly thereafter.

Ginsburg died Friday evening while surrounded by family at her home in Washington, DC. Though she had battled cancer multiple times later in life, the justice's death was due to complications from metastatic pancreatic cancer, according to an announcement from the Supreme Court. She will lie in state at the U.S. Capitol Friday, becoming the first woman ever to earn the honor.