Derrick Rose has scored a career-high 50 points to lift the undermanned Minnesota Timberwolves to a 128-125 NBA win over the Utah Jazz.

Rose was in tears after the game as he walked off the court serenaded by chants of "MVP! MVP!" from the home crowd. 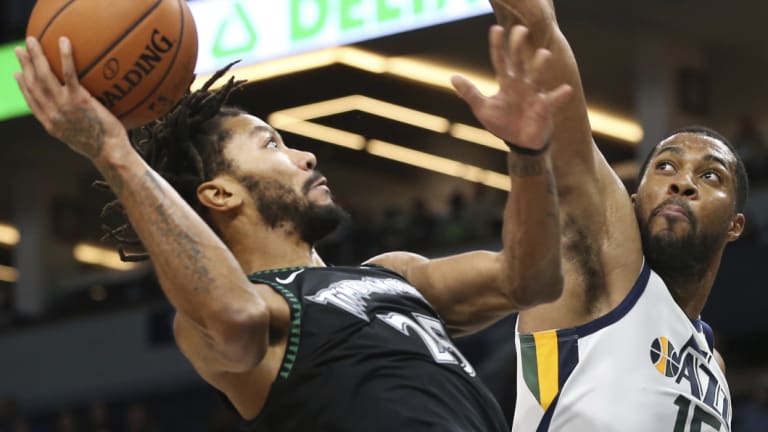 The 30-year-old point guard has been derailed by injuries since he was the 2011 NBA MVP.

In his first start of the season in the absence of Jimmy Butler and Jeff Teague, Rose had 34 points in the second half and 15 in a tightly-contested fourth quarter.

Donovan Mitchell top scored for the Jazz with 26 points while Australian duo Dante Exum and Joe Ingles added 14 and 13 respectively.

Butler, who requested a trade pre-season, sat out with what the Timberwolves described as "general soreness."

Denver star Nikola Jokic had 22 points and 12 rebounds but it was Paul Millsap's put back with 0.1 seconds left in overtime that gave the Nuggets a 108-107 victory over the Chicago Bulls.

The Nuggets improved to 6-1 while Zach LaVine had 28 points for the 2-6 Chicago.

Domantas Sabonis matched his career high with 30 points while Victor Oladipo scored 11 of his 24 points in the fourth quarter to guide the Indiana Pacers past the New York Knicks 107-101.

Spencer Dinwiddie made a three-pointer with 7.1 seconds left in overtime to finish with 25 points and lead the Brooklyn Nets to a 120-119 overtime win over the Detroit Pistons.

The Nets snapped a three-game losing streak to improve to 3-5 while Blake Griffin led the 4-3 Detroit with 25 points as Andre Drummond had 24 points and 23 rebounds.

LeBron James made a tiebreaking free throw with 2.1 seconds left, and the Los Angeles Lakers held on for a 114-113 win over the visiting Dallas Mavericks, who had drawn level after trailing by 14 with four minutes to play.

James scored 14 of his 29 points in the third quarter to help the Lakers end a two-game skid.

Stephen Curry nailed a game-high 37 points before Golden State closed out a 131-121 victory over the New Orleans Pelicans in Oakland, while Kevin Durant also contributed 24 points for the 8-1 Warriors.

In Phoenix, DeMar DeRozan and LaMarcus Aldridge scored 25 and 24 points respectively as the San Antonio Spurs rolled to an easy 120-90 win over the hapless 1-6 Suns.

Australian Patty Mills also produced nine points, a rebound and an assist from 20 minutes of court time for the Spurs.