Australia’s winter Olympic hopefuls are on high alert as COVID-19’s third wave sweeps Europe less than a month out from the start of the Beijing games.

Between 40 and 50 Australian athletes are scattered across Europe ahead of a final weekend of qualifying competitions before the first Olympic events, in curling, start in China on February 2. 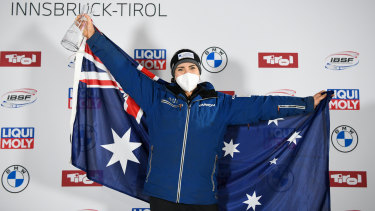 Bobsledder Bree Walker is battening down the hatches ahead of her departure for Beijing in coming weeks.

On a continent where daily infections nudge one million, many athletes are performing daily rapid antigen tests and living more and more isolated existences in groups as small as four or five to avoid contracting the virus.

They must make it through a dual-testing regime to meet China’s stringent entry requirements but Australia’s contingent are also following best practice with a PCR test, administered by private testing groups, 16 days out from departure. A positive result at that point would seriously threaten a campaign.

“It’s getting more and more intense the closer we get to the games, especially with this new variant (Omicron). It’s much more contagious and is spreading like wildfire,” bobsleigh medal hopeful Bree Walker told the Herald from St Moritz in Switzerland.

“We are isolating ourselves more and more, which can be hard at times. But you have to do what you have to do to keep yourself safe and in the game. We’ve been staying in apartments and catering for ourselves, which adds a lot more complexity. Usually, we’re in hotels and food is catered for, so it makes life simple when you’re training heavily.”

“There will be some people who will have COVID at the wrong time and that will make it very difficult for them … to go to China.”

Australia’s chef de mission Geoff Lipshut said four Australian athletes had contracted COVID-19 and a some staff, with no known active cases at the time of publication.

American ski race star Mikaela Shiffrin and top New Zealand medal hope Alice Robinson are among the highest-profile athletes to test positive this season. Their cases are being watched closely as observers are treating further infections among athletes as an inevitability.

“I can definitely see that there will be some people around the world who will have COVID at the wrong time and that will make it very, very difficult for them to meet the entry requirements to go to China,” Lipshut said. 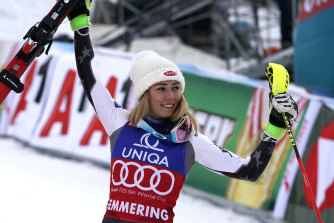 Mikaela Shiffrin made a successful return to competition after a coronavirus infection but others may not be so lucky. Credit:AP

Robinson tested positive in mid-December and had returned to competition by the end of the month. After a run last weekend, she wrote on social media: “Struggling a bit to keep my racing intensity all the way to the finish. I feel good but maybe this virus is a little bit harder then [sic] it seems to get rid of.”

With departure dates drawing near, nerves are tightening every day. Many Australian athletes have not been home since the northern hemisphere winter season of 2019-20. The World Cup circuit is spread throughout Europe, Canada and the United States, with some athletes making a call to stay overseas instead of risk being caught up in Australia’s ever-evolving international and domestic border arrangements.

It has made for a complex logistical exercise for the Olympic Winter Institute of Australia. Lipshut said athletes and coaches had been taking rapid antigen tests every 72 hours since October 2020.

“We have spent quite a lot of money on it over the past two years but it’s the ongoing maintenance we think is necessary,” Lipshut said.

As departure dates draw closer, the OWIA has hired private testing groups to make sure protocols are followed. China requires a negative PCR test 96 hours out from departure and a second test done withing 72 hours, both at approved testing stations. Results will be copied to Chinese health authorities.

Upon arrival in Beijing another PCR test will be administered by health officials at the airport, then athletes and staff will be taken to hotels to isolate until those results are processed. Once inside the Olympic village, Lipshut said the country’s ‘closed loop’ system, which separates all Olympic facilities, athletes and personnel from the rest of the Beijing population, would make it a safe and stable environment. Until then, athletes, coaches and officials on one of sport’s most social circuits will be living quiet lives.