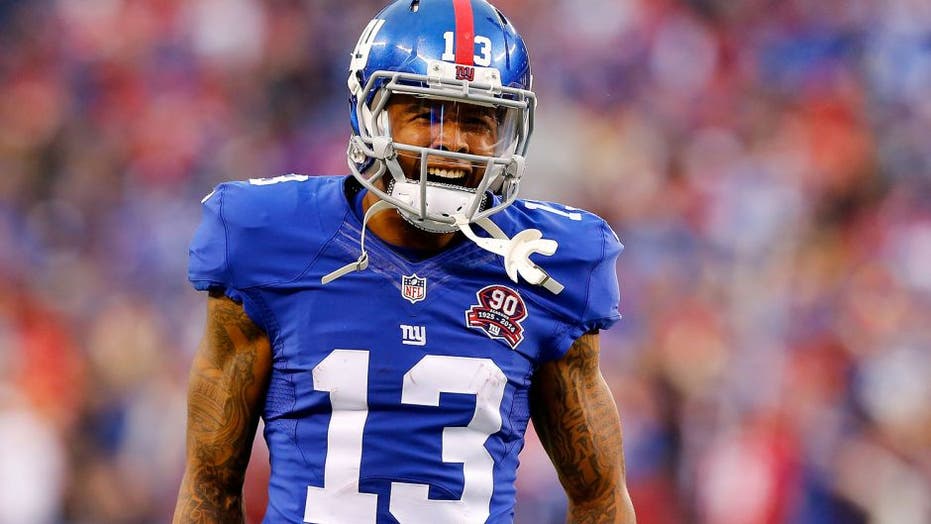 The NFL is making major coronavirus protocol changes, including team facilities shutting down for two days after games; NFL Hall of Fame quarterback Brett Favre weighs in on ‘Fox and Friends Weekend.’

Odell Beckham Jr. was well on his way to having an incredible career with the New York Giants after being drafted by the organization with the 12th pick of the 2014 NFL Draft.

However, things turned sour for the star wide receiver and the football team wound up trading Beckham to the Cleveland Browns in March of 2019.

Beckham, who has been critical of his former team and retired quarterback Eli Manning, opened up about where things went wrong with the Giants in a recent episode of the “All Things Covered” podcast with Patrick Peterson and Bryant McFadden.

TROY AIKMAN AT LOSS FOR WORDS AFTER COWBOYS FALL TO RAVENS

“I never wanted to win a championship for anybody more than the Giants,” Beckham said. “They just were such a legendary place. I was very proud to be a part of that organization.

I’m [going] to tell you where I ran into trouble,” Beckham continued. “It was when I felt like we had had the pieces, we know that Eli is a little older, I’ve been here now — I’ve given you two seasons. I’m capable. I can hoop. I felt like [the Giants] never put people around Eli."

Beckham said he received a good deal of grief — although his language was far more colorful — for his comments about Manning.

"I know I got a lot of sh– for when they said I talked bad on Eli. I never once said a bad thing," said Beckham, "If anything, I speak the truth. The only thing I can look back on and be like, ‘Man, I regret saying that’ is saying he’s not the same player, even though it’s the truth.”

SURGING NFC EAST MIGHT OFFER SOLID PLAYOFF THREAT AFTER ALL

Beckham said the Giants organization failed Manning during his years with the franchise.

“If they would have built around him, knowing, ‘Ok, he’s obviously not running anymore but he’s not trying (to) — he’s 40, he’s 39 — he’s not trying to get hit,’” Beckham said. “Tom Brady is not taking sacks, is he? It bothered me because they never built around him. We just kept drafting but we were just drafting. Not building an organization and franchise. We were never good.”

While Beckham played for the Giants, they only had one winning season, which came in 2016.

The following year, New York finished with a 3-13 record and Beckham played in just four games before fracturing his ankle, which put an end to his season. The Giants moved on from head coach Ben McAdoo and hired Pat Shurmur, but Beckham said that his relationship with Shurmur wasn’t the best.

“We got a new coach in there, I feel like that’s a situation where I feel like I can be honest about now because people have come out like ‘anonymous coaches’ and we really knew who it was,” Beckham said. “I felt betrayed in a sense that this coach had tried to turn me against my brothers and my people and telling the young guys to stay away from me because I’m not a good person, good team or role model, or this and that.”