Melbourne key forward Jesse Hogan will meet with his management in the
coming days to decide whether to request a trade to Fremantle.

Hogan, who is in Melbourne this week, will discuss the option of a
trade to the Dockers, who could use the potential departure of Lachie
Neale to the Brisbane Lions to facilitate a Hogan trade.

Hogan, a West Australian, would seek a trade for largely personal
reasons if he did so. He is contracted for 2019, like Neale. 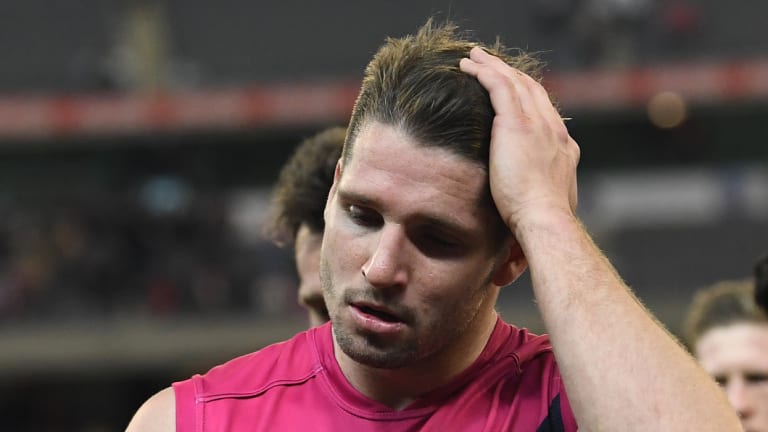 Jesse Hogan will decide whether to seek a trade shortly.

The Lions have pick No. 5, their first draft pick, on the table for
Neale, although the Dockers are likely to want more in return for
their best-and-fairest midfielder.

The Dockers could send this pick – and potentially another choice (they also
have pick No. 6) – to Melbourne for Hogan.

The Demons, too, will want more for Hogan than pick No. 5 given the
scarcity of key forwards with his talent in the AFL.

Gold Coast will be an interested onlooker of the Hogan and Neale
scenarios, since the Demons also have an interest in their key
defender Steven May, having recently met with the Suns' co-captain.

The Suns can either hold on to May – who is considering a trade to a
Victorian club – or trade him. Melbourne would be well placed for May
if they traded Hogan for a high pick, even though Hogan is younger and
arguably has a higher value.

While Hogan has not requested a trade, the Demons are well aware that
it's a possibility. The key forward met with Fremantle last year and
has been the subject of speculation about a move to his home state
over the past few seasons.