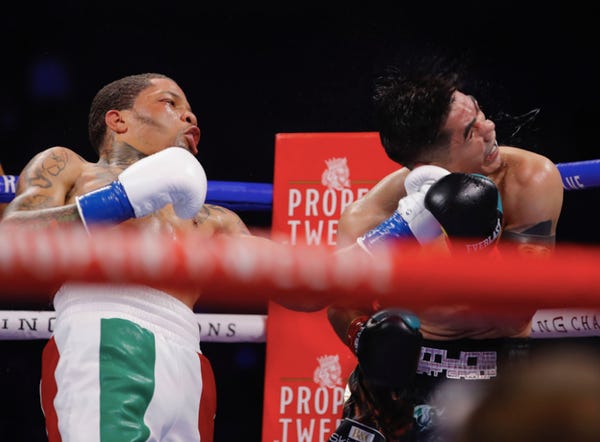 A Floyd Mayweather protege, backed by Mayweather Promotions CEO Leonard Ellerbe and the Showtime Sports president Stephen Espinoza, much has been said about the kind of trajectory Davis can enjoy to the top of world boxing.

And on Saturday at the Alamodome in San Antonio, Davis showed that he is not just a product of promotional hype as he shook off Santa Cruz's shots and knocked the Mexican out with a nasty, sixth-round uppercut.

Victory in the 130-pound match ensured Davis retained his WBA titles in the super featherweight and lightweight divisions and enhanced his reputation as a mini Mike Tyson.

Mayweather had objected to that moniker this week by saying Davis – nicknamed "Tank" – has other skills aside from his ferocious power.

"A lot of people don't know that 'Tank''s boxing skill is really better than his power," he said during a virtual press conference.

But in front of a socially-distant crowd in Texas, the 25-year-old fighter showed off the thing he does best — and that's forcing opponents to wake up with bruises, headaches, and concussions.

Watch an alternative angle of the finish here:

Davis is becoming one of the faces of global boxing.

Regis Prograis, who won a third-round stoppage earlier at the same event, told Insider last week that Davis is "a killer … a little killer."

Mario Barrios, who secured a sixth-round win, told us: "He's a very intelligent boxer, and very explosive. He's got one-punch knockout power and will walk you into any punch at any time."

The Showtime executive Espinoza will be delighted that Davis — one of the jewels in the Premier Boxing Champions stable — secured a highlight-reel moment that will be re-shared by the million on social media.

"The sky is the limit for him with what we've seen over the last year," Espinoza recently told Insider.

"We've seen him break into two brand new markets in Baltimore and Atlanta that hadn't had boxing, at that level, in decades.

"It's been a while since we've seen someone at 23, 24 years old that can go throughout the country, Atlanta, Baltimore, Los Angeles, and generate that kind of enthusiasm."

"It's some magic," Espinoza told us last month. "Like with Mayweather in his early years, Roy Jones, Tyson. Tyson was easy. He was a bulldozer clearing everything in his path.

"It's been a while since we've seen someone like "Tank" spring on the scene and position himself to become one of the two or three faces in this sport."