Hawthorn will sweat on the fitness of key defender James Frawley as they brace for a date with the rampaging Lance Franklin at the SCG next Saturday night.

Hawks coach Alastair Clarkson was less than impressed with his side after they scraped past lowly St Kilda by four points at Etihad Stadium, setting up what is essentially a battle for a top four spot with Sydney.

The win may have come at a cost, with the undermanned Hawks losing veteran Frawley with a back complaint, leaving him in doubt for the meeting with Sydney, whose spearhead Franklin is in form, kicking 13 goals from his past three matches including five in the Swans’ win over Greater Western Sydney on Saturday. 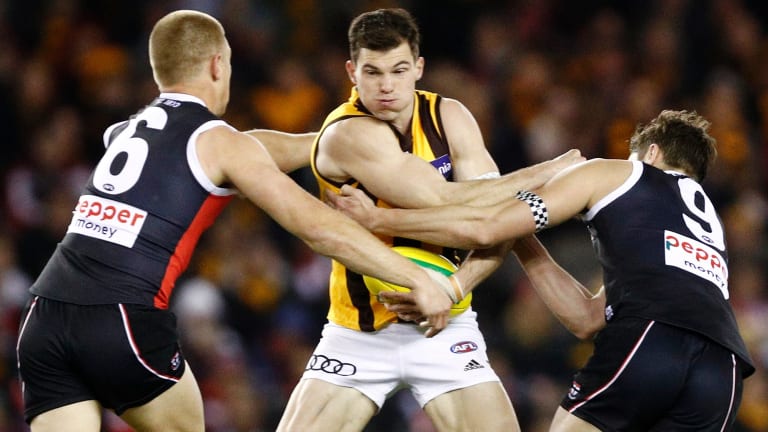 Hawthorn are already without defenders James Sicily (wrist) and Grant Birchall (knee), and Clarkson was uncertain about whether Frawley would be available for the final round clash.

“He’s just jarred his back, which he must have done at some stage towards the end of the second quarter,” Clarkson said.

“I don’t think it’s very serious, but having said that, he wasn’t going to be able to come onto the ground and play [at] full capacity, so we didn’t bother about trying to put him back on. We’ll wait and see how that settles. Sometimes backs can be nasty things that dag around for a little while, and sometimes they can recover quite quickly. We’re hoping it’s the latter, but we’re not going to know until Tuesday or Wednesday.” 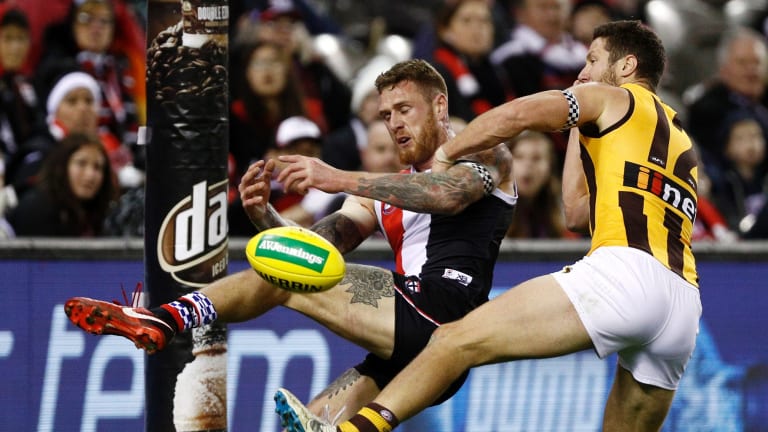 “It’s always a big challenge. If you let him off the leash it’s going to make it much tougher for you,” Clarkson said.

After winning big games against Essendon and Geelong, the Hawks were subdued against the Saints, and copped a rocket from Clarkson at half-time. The four-time premiership coach suggested the recent blockbusters may have led to a let down for his side.

"We’re a bit disappointed with the way we played. Particularly the last 40 minutes of the game. I think we kicked one goal in the last 40 minutes. To be fair, I think the better side lost tonight. We are very, very fortunate that we snuck away with four points out of that game," Clarkson said.

St Kilda had good reason to be [on], they’d been ridiculed in the press by all and sundry, they were really up for the fight.

“Is it the psychology of any sport really? Whether we just weren’t quite on, St Kilda had good reason to be [on], they’d been ridiculed in the press by all and sundry, they were really up for the fight.”

After fade-outs in recent defeats to the Western Bulldogs and Essendon, St Kilda coach Alan Richardson was pleased with his side’s improved effort.

“That was better. That was much more like four quarters,” Richardson said.

“I thought our shape, our ability to stop the Hawks, who are incredibly dynamic when they get outside, we were able to stop a bit of that.

"We gave ourselves an opportunity to win the game, and that was pleasing."

Richardson was hopeful Jake Carlisle would return for next Sunday’s game against North Melbourne after missing the Hawks game following the birth of his first child.

Skipper Jarryn Geary is set to be assessed after being concussed in the final quarter of Saturday night's defeat.