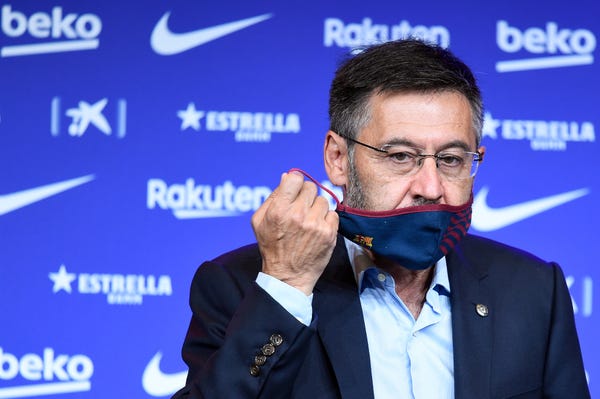 FC Barcelona President Josep Maria Bartomeu has resigned along with the rest of the club's board of directors.

The Spaniard's decision to step down comes just weeks before he was expected to be ousted by a vote of no confidence from the club's members.

Bartomeu had fallen out with Lionel Messi, which almost resulted in the Argentine star leaving the Camp Nou in dramatic fashion this summer.

"This is a well-considered, calm, consensual and collective decision by my fellow directors who have accompanied me over recent years in a loyal and committed fashion with regards to the project and the Club, and who have made so many sacrifices thinking always of Barca," said Bartomeu.

The 57-year-old added that, despite calls for his resignation earlier in the year, he did not do so because he did not want to leave the club in the hands of an interim board at the time.

"Yet the day after that painful defeat we had to take decisions that we could not put off any more, key to guaranteeing the sporting future and immediate sustainability of the Club. Furthermore, we had to do so in the middle of a global crisis without precedent. We could not leave the Club in the hands of an Interim Board with limited powers.

"As a Board we understood that, out of responsibility, we have to take those decisions. The majority of which were uncomfortable and unpopular."

"I wish all the best to the new President and Board, which shall be chosen by the club's own members," Bartomeu said. "They shall always have my respect and my support whenever they feel they need it."

Moments after his resignation, Bartomeu confirmed that he had agreed for the club to join a proposed new European Super League alongside a number of the continent's biggest clubs.

The proposed competition, which is being backed by FIFA and reportedly funded in-part by Wall Street bank JPMorgan, would effectively usurp the UEFA Champions League as Europe's biggest club competition, though talks are still in early stages.

"Today I can announce a piece of news that will extraordinarily change the club's revenue prospects for the coming years," Bartomeu said.

"The board of directors yesterday approved the acceptance of the requirements to participate in a future European Super League of football clubs, a project promoted by the big clubs in Europe."

La Liga President Javier Tebas slammed Bartomeu for the bombshell, claiming the competition to be "imaginary."

"Unfortunate [Josep Bartomeu] statement on his last day about FC Barcelona joining a weak and imaginary competition which would be their ruin," Tebas tweeted.

"It confirms his ignorance about the football industry. Sad end for a president with successes and lately many mistakes."