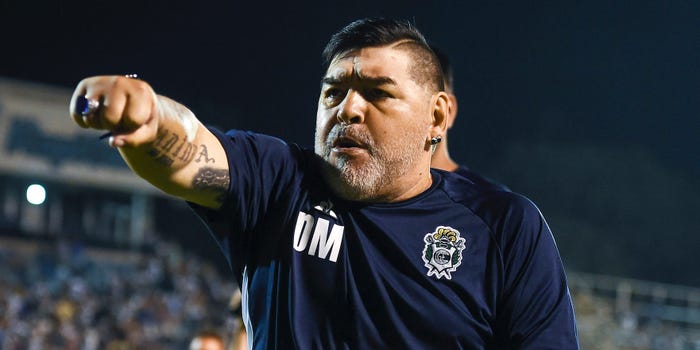 Argentine soccer legend Diego Maradona once said he had distanced himself from the Catholic church after growing disenchanted with Pope John Paul II.

Maradona, who died of cardiac arrest at age 60 on Wednesday, visited the Vatican in 2000. According to reports at the time, Maradona grew upset when he believed he didn't receive a special rosary from the pope.

Later, he told reporters that he was disgusted with the gold ceilings at the Vatican, saying Pope John Paul II should "sell" them if he wanted to help the poor.

"I've been to the Vatican and seen the gold ceilings. And then I hear the Pope saying that the Church was concerned about poor kids. So? Sell the ceilings, mate!" Maradona was quoted by The Independent in 2005 as saying.

Maradona visited Pope Francis in 2016 for a charity soccer match and relayed a similar message to reporters.

"I went into the Vatican and saw that golden roof. And I said to myself how could somebody be such a son of b—- as to live with a golden roof and then go to poor countries and kiss children with a full belly? I stopped believing," Maradona said, according to El Pais.

In 2014, Maradona also received criticism for calling the Pope a "son of a whore," according to Australian soccer outlet The World Game.

Upon visiting Pope Francis, Maradona said his faith had been restored.

"I had drifted away from the Church, but Francisco brought me back," he told reporters, according to El Pais.

Maradona had called himself "the voice of the voiceless" and a "representative" of the people. According to The Independent's Paul Newman, Maradona was generous with money to a fault, frequently paying for his entourages.

Argentina will reportedly hold three days of mourning for his death.