People with type O or ‘negative’ blood are LESS likely to catch coronavirus and die from Covid-19, study finds

People with a type O blood are 12 per cent less likely to catch the coronavirus than other blood types, a study has found.

It also reveals that those with a negative blood type (O-, A-, B- or AB-) are, on average, 21 per cent less likely to get the virus than people with a positive type.

Individuals with type O or negative blood are also 13 per cent and 19 per cent less likely to develop severe symptoms or die, respectively.

In the UK, around 15 per cent of the population have a negative blood type and almost half (around 48 per cent) are type O. 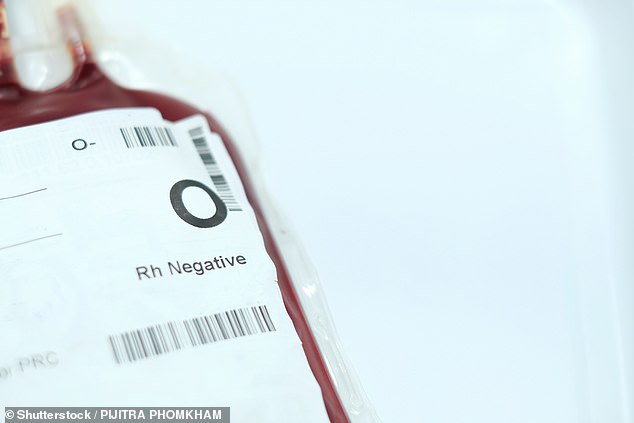 Researchers from the Institute for Clinical Evaluative Sciences in Toronto studied 225,556 people who had a blood test between 2007 and 2019 and a Covid swab this year.

Every person has one of four blood types, either A, B, AB or O and the difference in blood groups depends on the presence or absence of specific attachments on red blood cells called antigens.

There are two antigens, A and B. An individual can have one of these, both (AB) or none (O).

The presence, or absence, of these molecules dictates what blood type a person is.

There is another antigen, but there are not four possibilities, just two, and this is called the Rhesus antigen.

Erroneously named after the monkey, a person is either Rh positive or Rh negative.

Source: 900,000 blood donors on the NHS blood and transplant register

Statistical analysis accounted for all other variables and comorbidities and found the adjusted relative risk for SARS-CoV-2 infection is 15 per cent higher in type AB than in type A.

Infection is five per cent less likely in type O than A, but when compared to all blood groups, this grows to 12 per cent, the researchers found.

‘There were 1,328 cases of COVID-19 with severe illness or death, with higher probabilities among AB and B blood groups as well as those who were Rh+,’ the researchers write.

Those with blood type B are at 21 per cent higher risk for severe illness following infection than those with type A.

‘In this study, which was done within a universal health care system with widespread SARS-CoV-2 testing, O and Rh− blood groups were associated with a slightly lower risk for SARS-CoV-2 infection as well as severe COVID-19 illness or death,’ the researchers write in their study, published in the journal Annals of Internal Medicine.

The findings align with previous research from China which found a similar protective effect of certain blood types.

Researchers assessed 2,173 people who had been diagnosed with the coronavirus, including 206 people who died after contracting the virus, from three hospitals in Hubei.

Academics compared the data of the infected Wuhan patients with 3,694 non-infected people in the same region.

Of the 206 patients in the study who died, 85 had type A blood, equivalent to 41 per cent of all deaths.

In the healthy Wuhan population, a city of 11 million people, 34 per cent of people are type A.

In the study cohort, 52 of the people who died were type O, making up a quarter of all deaths. Under normal conditions just 32 per cent of people are type O.

The figures for all infections, not just deaths, are 26 per cent and 38 per cent for type O and type A, respectively.

Covid-19 has NOT mutated to be more infectious

Coronavirus has not mutated to become more infectious, according to a scientific study that debunks a widespread theory.

Most coronavirus cases seen globally feature a specific genetic mutation called D614G which is different to the original strain that emerged in Wuhan last year and experts feared was more infectious than the original version.

But UCL researchers looked at more than 46,723 cases of Covid-19 from 99 countries and assessed how mutations appeared and if they altered transmissibility.

Scientists identified 12,706 total mutations in SARS-CoV-2 — the virus which causes Covid-19 — and none of them were found to boost infectivity.

This includes D614G which is found on the spike of the coronavirus and allows it to bind to human cells, a mechanism which allows it to infect people.

Other academics doing lab studies, not genetic reviews, had previously found D614G made the virus more infectious but the UCL researchers believe it became dominant by chance, not by design.

They say their conclusions may disagree with previous findings due to different methodologies and that D614G became so prevalent because it was an early mutation which happened to get carried around the world in the early days of the pandemic, not because it is more infectious.