Maddison Rocci's sophomore season is almost over but the rising Canberra Capitals guard still has to look around and pinch herself.

Here she is, in the deciding game of the WNBL grand final series in front of a full house, with a chance to get her hands on the championship she has been dreaming of. 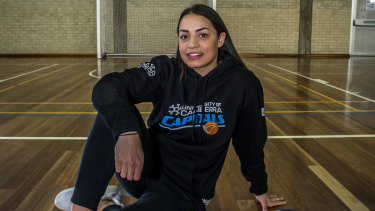 Maddison Rocci is a rising star for the Capitals.Credit:Karleen Minney

The Capitals are bracing for a sold-out crowd after the club released 300 standing room only tickets for their WNBL championship-deciding clash with the Adelaide Lightning at the AIS Arena on Saturday.

The 20-year-old admits she has been overawed by the occasion in the opening two games which affected her output – but she is determined to empty the tank with a title up for grabs.

"I was a bit nervous so confidence was down, but it’s game three. I’ve got to give it my everything this game and just go out there and do what I can," Rocci said.

"We come on and do what we can, I came on and played my defensive role [in the opening two games], that’s all [coach Paul Goriss] could ask from anyone that comes on the court.

"We’re ready to go when he calls upon us, we’ve just got to do what we can."

When the call comes, the message is simple.

"He normally just says to me who I’m going to guard, and my defence is pressure. I’ve been on my defence all this season, that’s what has brought me to where I am," Rocci said.

"There’s a bit of nerves [in front of big crowds], but you block that out when you’re on the court. You hear the fans but you’re not really focused on it. You focus on what’s happening on the court. 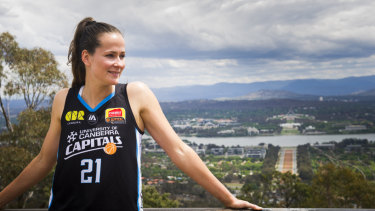 Keely Froling is right at home in Canberra.Credit:Elesa Kurtz

"It’s amazing to play game three back in Canberra. We’re obviously disappointed with the result in Adelaide but we move on from that and come back and play in front of over 5000 fans on our home court.

"That’s what Canberra wanted. They kind of jinxed us a little bit, but it’s going to be amazing. I can’t wait for it."

Goriss expects the thrill of a packed house will leave his crop of rising stars "juiced up and excited". Rather than being overawed by the big stage, he wants them to soak it up.

Grand finals don't come around very often, so he will be calling on his side to leave everything on the floor.

While Capitals youngster Keely Froling hasn't tasted a stage as big as this, for so long this season she has been a weapon off the bench for Canberra.

The 22-year-old is relishing the chance to shine under the bright lights of a grand final – it is in her blood. Her mother Jenny won four WNBL championships while her father Shane spent the best part of 20 years in the NBL and donned the green and gold of Australia.

"I’m super excited, it’s a big weekend. It’s special to have them down here. Dad’s already out in the garden doing yard work, it’s nice to have someone here to do work around the house as well," Froling laughed.

"If we win I get one-up on dad because he never won a national championship, so there is always that rivalry. Mum won a few. I’ve definitely got my sights set on many more, but we’ll start with this one."