The combination of morning finals and a fortuitous schedule could see Cate Campbell become Australia’s first female swimmer to carry the flag at an Olympic opening ceremony, with the freestyle star and basketball champion Patrick Mills among the favourites to be given the honours in Tokyo.

In what will be a departure from Olympic tradition – and what isn’t at these delayed Games – each nation will have a male and female flag bearer, with the announcement to be made live on Seven from 6pm Wednesday night. It would normally take place at special function in the Athletes Village just days before the ceremony. 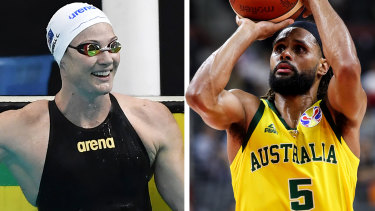 One thing that hasn’t changed is the quality of the athletes who are in line to be given the honour. There are 472 to choose from, many who have striven for excellence for years on end in sports that only get their moment in the sun when the Olympic calendar brings them into focus.

Equestrian Andrew Hoy will compete at a staggering eighth Olympic Games, while tennis star Sam Stosur will be back for Games number five. Both are well in contention but Campbell and Mills remain the favourites as they both prepare for their fourth Olympic Games.

Swimming has long been Australia’s best Olympic sport but it has traditionally been a difficult task for flag bearers, given the long waits at the stadium and short turnaround into competition, often early the very next morning.

Only two Australian swimmers have carried the flag for the opening ceremony; Andrew ‘Boy’ Charlton in 1932 and Max Metzker in Moscow in 1980. But Campbell might be on the verge of walking herself into history.

Like Beijing in 2008, Tokyo will have morning finals and night heats in the pool to satisfy their US benefactor and broadcast partner NBC. That plays into the hands of Campbell given she won’t be required to race on the first day of competition, which comprises a set of night heats.

She will be able to get in the water and warm up for finals on day two, where she will drop into the team for the 4x100m freestyle relay, an event which Australia is favoured to win for a third-straight Olympic gold medal.

It’s a logistical timeline Swimming Australia chief executive Alex Baumann, who carried the flag for Canada in 1984, believes is possible if there is some flexibility at the ceremony, especially given the draining heat in Tokyo and the constant wearing of masks.

“We’ve got a very good relationship with the AOC and if it was the case a swimmer was named as flag bearer, there would be discussions to ensure we make it as easy as possible for that person to be able to carry the flag at the opening ceremony,” Baumann said.

“The one thing you don’t want is for someone to be standing on their feet for six hours if they are an elite athlete. They need to be fresh and rested.”

Campbell’s Dolphins teammate Ariarne Titmus said the leadership Campbell had shown in the Australia team, as well as her inspiring comeback from the depths of disappointment in Rio, made her a natural choice.

“The entire time that I’ve been on this team, she’s been a standout leader and she’s always put her best foot forward. And I’m sure that she would do the same thing if she was chosen to be our country’s flag bearer,” Titmus said.

Mills looms as a standout candidate, with the Boomers guard a star on the court and a tireless advocate for social and indigenous issues when he’s not playing for the San Antonio Spurs in the NBA.

Sports news, results and expert commentary. Sign up for our Sport newsletter.