BRAZILIAN star Daniel do Nascimento collapsed twice during the men's marathon at the Tokyo Games.

The 23-year-old, nicknamed 'Danielzinho', was one of many forced to quit the race, with athletes running in 30-degree heat and high humidity. 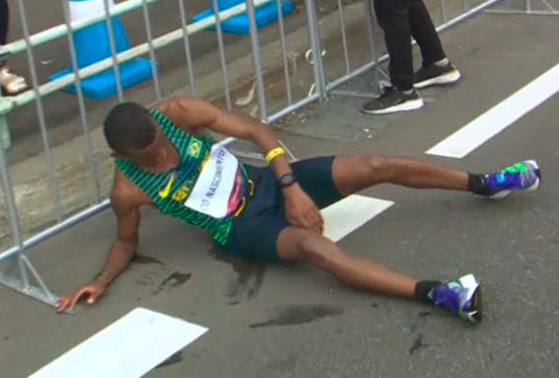 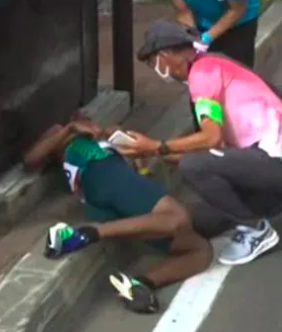 The long-distance runner's legs gave way around 80 minutes and 25 kilometres, around 15.5 miles, into the race.

Danielzinho quickly resumed in a bid to finish the marathon but withdrew two minutes later in distressing scenes.

The young athlete was seen grabbing his chest and stomach as he appeared to be struggling with the extreme conditions in Japan.

Marathons aren't always staged in high temperatures, with the famous London, Boston and New York races not scheduled in the summer.

Danielzinho has completed only one competitive marathon in his career and is more experienced in the 5,000m and 10,000m events.

Kenyan icon Eliud Kipchoge won the men's race to defend his title and claim his fourth Olympic medal, posting a time of 2:08:38.

Speaking to the BBC, Kipchoge said: "I want to say thank you to everyone for the support and to those that made the Olympics, Tokyo 2020 happen.

"I am happy to defend my title and to show the next generation, if you respect the sport and be disciplined you can accomplish your assignment.

"It was not really easy, but it was really hard for everybody if you consider the weather. I am happy to cross the finishing line as the fastest.

"Tokyo 2020 has happened, it is means a lot, it means there is hope. It means we are on the right track to a normal life."