Twenty-one years ago, Laura Wilkinson became an Olympic golden girl. Standing on the edge of a 10-meter platform in Sydney, Australia (with a broken foot, no less) Wilkinson nailed her final dive and came from behind to win the 2000 Olympic platform gold medal — a feat that hadn’t been accomplished by an American woman since 1964. 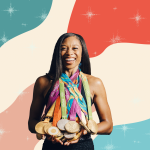 Allyson Felix On Finding Her Voice as an Advocate for Moms

Not content to call it a career, Wilkinson competed in two more Olympics and nabbed two world titles before finally hanging up her Speedo after the 2008 Games. She and her husband, Eriek, wanted to start a family — they’re now the proud parents of four kids through birth and adoption: Arella Joy, 10; Zoe, 9; Zadok, 7; and Dakaia, 5 — and Wilkinson turned to other pursuits. (She’s an inspirational speaker, author, and podcast host, just to name just a few.)

But that retirement from diving? It was short-lived. In 2017, Wilkinson officially began her comeback with an eye on qualifying for the 2020 Tokyo Olympics. It wasn’t easy, to say the least. She underwent spinal surgery in 2018; then, just months after getting back on the platform, the pandemic hit and shut down her access to training facilities. Still, the Houston resident persevered and qualified for the U.S. Olympic Trials in Indianapolis in June.

Thirteen years after stepping away from the sport, the 43-year-old mom qualified for the 10-meter event final and was once again diving for a spot on an Olympic team. Her 10th-place finish didn’t secure her a trip to Tokyo — just the top two finishers made the team — but it certainly secured her reputation as a diving legend.

Wilkinson spoke to SheKnows about facing pressure, following big dreams, and involving her kids in her comeback.

SheKnows: What made you decide to come out of retirement after so many years away from the sport?

Laura Wilkinson: Well, it wasn’t a snap decision. In early 2016 I had three young kids and my coach was like, ‘Hey, why don’t you come to the pool when they’re in preschool and just have some mommy time?’ It took me a little while to put that swimsuit back on, but the minute I hit the water, I just felt like I was home again. For one hour, one day a week, I would go in and just have this time [for me]. It was so refreshing and fun to be around it again, and things started to come back quickly. A few months later, I asked him, ‘Would it be crazy to try this again?’ And he said no. I kind of dove in headfirst that fall and gave it everything, and by January I had my full list off the 10-meter platform again.

SK: Did you feel like there was more pressure on you as an Olympic champion?

LW: No, I felt like this is almost a separate journey. It’s nice to know that everything I have [already] done can’t be taken away. I retired at 30, which is super old for divers, and I thought I’d never get to do it again, like I just physically wouldn’t be able to. And so just to be able to do the thing that I love doing again has been a gift.

SK: Speaking of pressure, Simone Biles certainly put a spotlight on the pressure that Olympic athletes face. Can you relate to some of that pressure?

LW: Oh, for sure — and I mean, I say I understand, but I don’t understand because the amount of pressure she’s under is a whole other level from what I’ve experienced. But something I really want to point out to people [is that] gymnastics, like diving, is not your typical sport. In gymnastics, you can have a catastrophic injury that can affect the rest of your life. If you don’t know where you are in the air, you have to make really wise decisions. You need to be smart for the safety of the rest of your life. So in that regard, I totally understand.

SK: What has this past year has been like for you as a mom and as an athlete?

LW: Well, it wasn’t normal! It would be hard enough just preparing for the Olympics, but having been through a pandemic that shut down the entire world, that was a whole other level. There were a lot of challenges. I spent all of 2019 rehabbing from a two-level cervical fusion in my neck. I had just gotten back on 10-meter before the pandemic shut everything down. I thought, well great, I have an extra year. This is actually going to be really good for me. But we weren’t allowed to get into any facilities until 3 months before our Olympic trials in 2021. So even though I had all this extra time, I didn’t have all this extra time.

And then with my kids, we decided to homeschool them this year because there were so many uncertainties and we wanted to give them some stability. So there was a lot of juggling, a lot of stress, all those things. At the same time, when you walk through those things together as a family unit, it actually gave us a lot of time to talk through issues because we were always together. We were walking through these challenges together. So as hard as that was, it was a good learning experience for all of us.

SK: What did they say to you after the Olympic trials?

LW: I think they knew that I wasn’t diving the way I wanted to because they’ve seen me dive before. But it was really funny because I ended up number 10, so they kept saying, ‘Mom, you’re a perfect 10!’ It was really sweet. And my son was basically like, ‘Can we go home now? And you can play with me all day, every day?’ The great thing about your kids is they love you no matter what.

SK: What do you hope your comeback journey has taught your kids?

SK: And what have you learned?

LW: I thought when I had my kids, it was like, my time is over and it’s all about them. And while that’s true, it doesn’t mean my dreams and my goals just have to go away. I can be all about my kids and do great things and make a difference in the world. And honestly, what I’ve learned is when you let your kids be part of that journey with you, they make you stronger, they make you more accountable, they make you better at what you’re trying to do. And they’re getting inspired along the way; they’re learning from watching you because your actions are way more powerful than your words.

SK: Finally, I have to ask: Are you done? Have we seen the last of your competitive diving?

LW: I never want to say never! I don’t feel like I’m done, but, you know, I’m just kind of taking it day by day at this point. And we’ll see!

This interview has been edited and condensed for length and clarity.

WATCH: Young Olympic Athletes On Being a Woman in Sports

Before you go, click here to see Team USA Olympians over the years.