ARSENAL fans claim Everton got away with a double whammy of dangerous studs-in challenges.

Ben Godfrey scarred Takehiro Tomiyasu's face when the Gunners defender was on the ground, and Anthony Gordon floored Nuno Tavares. 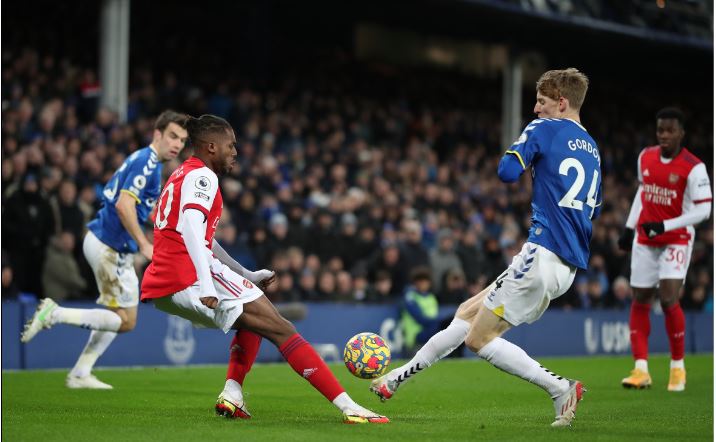 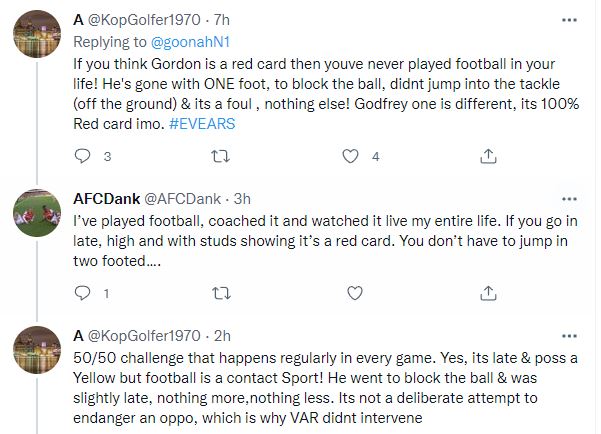 Everton centre-back Godfrey evaded punishment even after VAR intervened but Gordon's lunge was not even reviewed as the Toffees snatched a last-gasp  2-1 Premier League win.

One supporter posted: "Awful, awful game from everyone, us, Everton, Mike dean, var… but how the sweet mother of Mary Godfrey stayed on the pitch & this Gordon tackle on Tavares weren’t looked at!?!?"

Now many Arsenal fans are also blasting a SECOND incident – where Gordon caught Tavares low down on the shin.

It looked more of a clumsy sidefoot tackle than brutal or reckless.

But some supporters on social media were furious that VAR had not taken a look to help out ref Mike Dean.

One fan said: "I’ve played football, coached it and watched it live my entire life. If you go in late, high and with studs showing it’s a red card. You don’t have to jump in two footed…."

But other supporters pointed out that Gordon appeared to make contact with 'only' his leading, right boot.

One such comment was: "If you think Gordon is a red card then you've never played football in your life! He's gone with ONE foot, to block the ball, didn't jump into the tackle (off the ground) & its a foul, nothing else! Godfrey one is different, it's 100 per cent a red card imo. "

And another fan argued: "50/50 challenge that happens regularly in every game. Yes, it's late & poss a Yellow but football is a contact Sport! He went to block the ball & was slightly late, nothing more, nothing less. It's not a deliberate attempt to endanger an oppo, which is why VAR didn't intervene."

But if opinion was split over Gordon, it seemed most people commenting on Gordon's challenge believe he was fortunate to escape being sent off

Speaking alongside fellow ex-England star Carragher, Neville said: “You’re talking to two of the masters of trying to make it look accidental.

“We think he definitely means that. However I can see why VAR have said it’s accidental, you couldn’t prove it… but as a professional you know.”

Everton themselves had two Richarlison goals ruled out for marginal offside decisions before they sneaked their first Prem victory since September 25.

That condemned Arsenal to their third defeat in the past four matches. 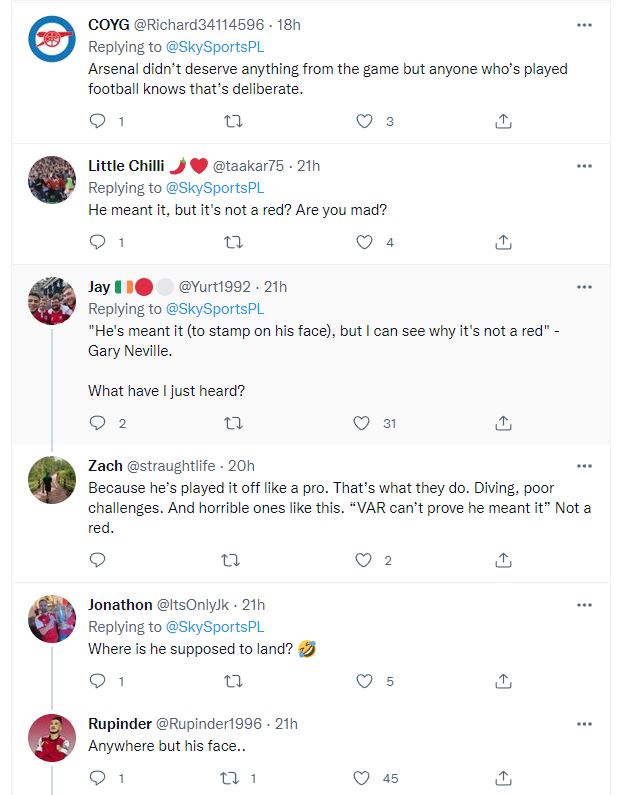