Argentina have had to postpone their Rugby Championship warm-up against a New South Wales Waratahs XV as several players in the squad are nursing injuries and their focus must remain on the test matches, coach Mario Ledesma said on Friday.

Argentina, who were released from a bio-secure facility in Sydney earlier this week, are keen to get some game time before opening their campaign against the All Blacks on November 14.

However, Ledesma said given most of the team had not played in more than seven months, it was more important they focussed on ensuring they would be in the best possible shape to face New Zealand and the Wallabies. 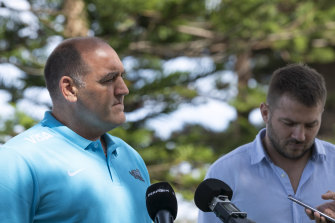 "We were going to play on this weekend but we have got a lot of soft tissue injuries and we don't want to risk it," Ledesma told reporters in Sydney. "The most important thing is to get ready … and be competitive and give them a tough time."

Ledesma added that because both the Wallabies and All Blacks had already played domestic Super Rugby competitions and two tests, the challenge would be tougher on his team.

"Rugby wise, I don't know where we are but mentally we are in a really good spot," he added.

"Australia and New Zealand … they're playing really well. A lot of intensity and physicality.

"Our boys haven't had one scrum in seven or eight months against a proper opposition, they've just been playing against themselves."

The Pumas were hit by a wave of COVID-19 infections before they left for Australia, with more than a dozen players and coaches testing positive.

The majority of the team arrived in Sydney in early October and spent two weeks in isolation. Another 13 European-based players only arrived this week and are in isolation.

"The whole dynamic of the team was not what you would usually do in a tour," Ledesma said.

"I was proud of the boys how they stayed positive in training with a lot of attitude and staying humble.

"To play the Rugby Championship is massive."