Hawthorn's four-time premiership coach Alastair Clarkson has received another accolade with the club awarding him life membership at their annual general meeting.

The 50-year-old joined the club as coach in 2005 when the Hawks were close to the bottom of the ladder and played a key role in their ascension to one of the game's biggest and best clubs.

In his 14 seasons they have played in five grand finals and 10 finals series and his winning percentage after 329 games is an extraordinary 62.61 percent. 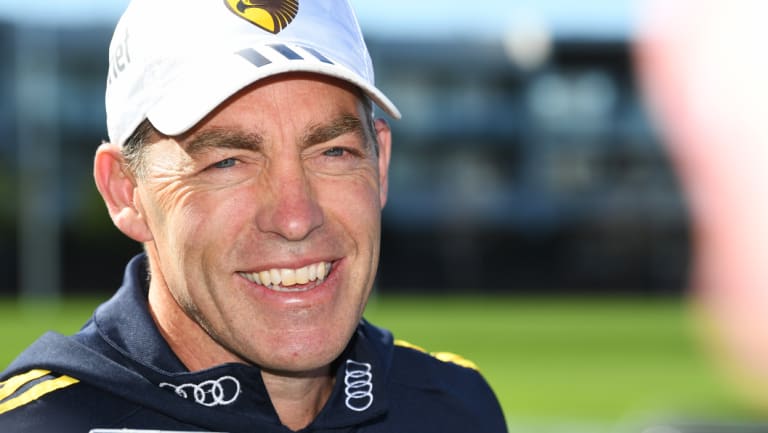 The Hawks also recognised two former members of the football department who were key to that success. David Rath, who is now at the AFL, and Andrew Russell, who joined Carlton this season, were also recognised with the honour while current physiotherapist Andrew Lambart earned life membership.

After coming to Hawthorn alongside Clarkson from Port Adelaide, Russell established himself as one of the game's best conditioning coaches with the Blues finally landing him for this season as he looked for a new challenge while Clarkson recruited Rath from the AIS as a kicking coach. Rath became one of the best tactical minds in the game.

The quartet are among Clarkson's favourites with Gunston's consistency since arriving from Adelaide playing a huge role in the club winning three flags on the trot while Puopolo was reborn as a pressure forward after arriving as a small defender to become one of the most valuable draft picks ever. Stratton is only beginning to earn recognition for his one-on-one work in defence while Schoenmakers was rewarded when he stuck with the club and was a key player in 2015.

Chicago West and Stormi Webster are BFFs for life! The pair had a blast on a speedy wagon ride as Chicago paid Stormi a sweet…