Am I languishing? Am I flourishing? Who can say. What I do know is that, in the year since the pandemic began, I have cleaned and reorganized my basement at least three times and yet neither it nor I seem to be any better for it.

Cleaning the basement is just one step in my regular reshuffling of stuff from the attic to the basement to the garage and around again, in a house-wide three-card monte. High-school track trophies. Book-research notes, two decades old. Matchbox cars — dented, chipped — from when I was, like, 7. Nothing ever leaves, it just disappears for a time behind another door.

Some of it has sentimental value. Much of it I would gladly discard were it not for the searing fact that it will take forever to decay. My time on Earth is limited, alas, but my stuff will live for decades (Matchbox cars), centuries (Genesis vinyl LPs) or more (Legos, anyone?). If I could take it with me I would, to spare the archaeologists of tomorrow from having to encounter it and the contents of every other basement, self-storage locker and landfill across the world since time began.

Today’s archaeologists are already plenty busy sifting through yesterday. Recently they found, in Italy, a 2,000-year-old marble head of the emperor Augustus. In Poland, a sword that may have been wielded in the Battle of Grunwald on July 15, 1410, in which Polish-Lithuanian troops defeated the Knights of the Teutonic Order. In a cave in Mexico, the 1,200-year-old hand prints, red and black, of Mayan children. In Switzerland, at the bottom of Lake Lucerne, the remains of a Bronze Age village.

In early April, a cartographer in Sweden stumbled upon a spectacular hoard of well-preserved bronze artifacts — necklaces, brooches, bracelets, anklets — dating back 2,500 years. The items were lying on the forest floor, outside the burrow of an animal with no qualms about cleaning house. “It all looked so new,” the man marveled. “I thought they were fake.”

It’s the rare scholar who unearths a pyramid or, like Ralph Fiennes and Carey Mulligan in “The Dig,” a Viking longship — something grand, buried with intent. Most archaeology deals with rubbish: the discarded, the broken, the stuff that doesn’t deserve a second life but got one anyway, as the ghost of culture past. There is nobility in that; as the poet A.R. Ammon wrote, “garbage has to be the poem of our time because / garbage is spiritual.”

But spirits only get you so far. Recently, in North Macedonia, archaeologists discovered the grave of a wealthy woman buried on a brass bed. She was long gone, but the bed — lavishly decorated with the heads of mermaids, or perhaps medusae — remained, the first of its era to be found intact and in situ. It will be studied, spruced up and placed on exhibit for “the whole world to see,” researchers said.

That’s just what my basement and I need, the whole world watching. Would that you could find me 78,000 years from now, like the earliest human burial in Africa, with only the scrap of a pillow under my head. But if you don’t want to wait that long, stop by and, for five bucks, behold: Man Entombed in Cellar, c. 2021. I’ll be here at least through the weekend, I hope.

This Wired story about hackers blackmailing patients over their mental health records is chilling.

How a Yale biologist and R.E.M.’s Michael Stipe teamed up to name an ant species after one of Andy Warhol’s “Superstars.”

Nature takes a powerful, in-depth look at how poverty and discrimination drive the spread of disease.

These coronavirus vaccine skeptics talked to The Washington Post about why they changed their minds and got the shot after all.

Jennifer Szalai reviews Michael Lewis’s “The Premonition: A Pandemic Story” in The New York Times Book Review: “The title of ‘The Premonition’ suggests that the people in this book harbored a sixth sense about the future, but Lewis suggests that they weren’t prophetic; they were just competent, dedicated individuals who were paying attention.”

Science in The Times, 96 years ago today 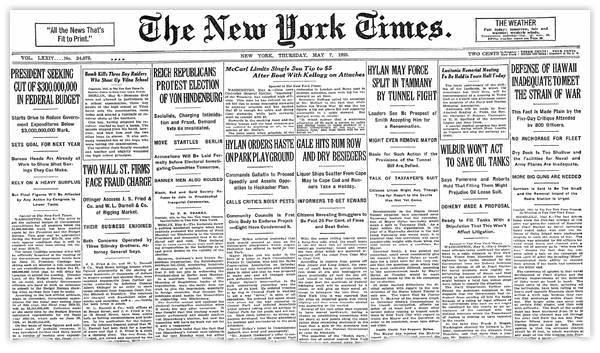 “To feminine fingers has been entrusted the delicate work now begun of sifting the contents of the urns found at the Franco-American expedition’s excavations of the sanctuary at Tanit and the picking out for later study of the incinerated bones of children placed there more than 2,000 years ago, probably by Carthaginian mothers who sacrificed their offspring to this Punic goddess.”