Imagine that you’re walking on the street and see a man viciously beating an older woman.

What would you, just a passer-by, do?

That question — about the ethical responsibility to help a stranger in distress and the dynamics that prevent people from acting — has been the focus of research for decades, and helps inform some of the debate this week around two chilling incidents.

In one, a man pummels and chokes a subway passenger in New York into unconsciousness; in the other, an assailant on a busy Midtown street in Manhattan knocks a Filipino immigrant to the ground and then repeatedly kicks her head.

The videos, which were posted earlier this week, prompted swift condemnation, with many asking why witnesses had seemingly failed to intervene during the acts of violence. For many, the incidents revived a common complaint about the atomized selfishness of big city residents.

“New York has, once again, cemented its longstanding reputation for apathy,” wrote Alex Lo, a columnist for The South China Morning Post in Hong Kong. “Given the level of ethnic violence against Asians that has been widely reported in recent months, it’s all the more puzzling why no one saw fit to intervene to help those two victims.”

But those who study what’s known as the bystander effect say the narrative of callous apathy is an outdated trope that dates back to a New York Times account of the 1964 murder of Kitty Genovese. She was a bar manager who was stabbed to death outside her building in Queens while three dozen neighbors supposedly ignored her cries for help. Although many key details of the article have since been debunked — the claim that 38 people witnessed the crime, for one, was greatly exaggerated — the account gained international attention and fueled a largely one-side debate about the perils of urban living.

The crime also gave birth to an entire branch of psychology dedicated to understanding the behavioral dynamics of people confronted by public violence. And in the intervening years, researchers have found that popular beliefs about the cold detachment of urban dwellers is largely a canard, one sustained by headline-grabbing media accounts of people who appear to ignore a crime in progress. Such incidents, experts say, are actually quite rare.

In a 2019 study published in the journal American Psychologist, researchers in Britain and the Netherlands reviewed surveillance footage of 200 violent altercations in three countries and found that bystanders had intervened nine out of 10 times. In many of the instances, several strangers worked together to calm a fight.

The authors of the study found little variation in the rates of intervention in the three cities — Amsterdam; Cape Town; and Lancaster, England — suggesting that the human impulse to help strangers despite risks to one’s own personal safety is universal.

Richard Philpot, the lead author of the study, said the uniform rate of interventions was especially surprising given the climate of fear in Cape Town, a city with a comparatively higher rate of violent crime. “Now that we can examine real-life public conflicts on a large scale, we see that people actually help out a lot,” said Professor Philpot, a social psychologist at Lancaster University. “This is certainly reassuring, to know that others around do not exclusively inhibit helping, but are a resource for good.”

Still, the decision to intervene comes with real risks. Earlier this year, a Chinese immigrant who was reportedly troubled by the spate of attacks on Asian-Americans was stabbed to death when he tried to break up a street brawl in Brooklyn. In 2020, a man who intervened in a fight at a Harlem subway station was pushed onto the tracks and was killed by a train.

Jackson Katz, a co-founder of Mentors in Violence Prevention, an influential program started in 1997 that empowers people to intervene in instances of sexual assault, said fear, not apathy, is the main reason people fail to act when confronted by violence.

“From the outside, it’s easy to look at these people and say, ‘Oh you’re a coward, you’re apathetic,’ or, ‘Our culture is so screwed up,’ but the fear of physical retribution can be paralyzing, even if a person is terribly upset by what they are witnessing,” he said. “And it’s a realistic fear, especially in a country where guns are everywhere.” 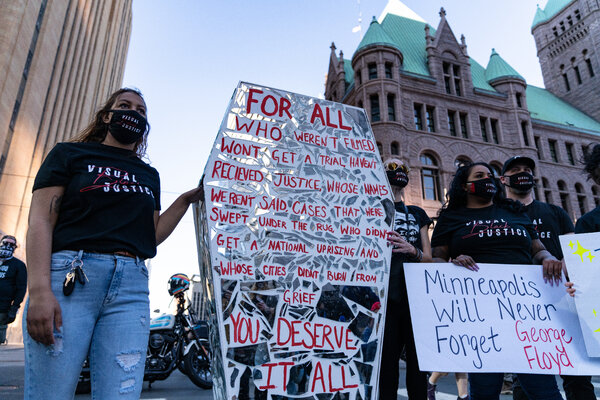 In a way, that explains some of the tragic testimony heard this week during the trial for Derek Chauvin, the former police offer charged with killing George Floyd in Minneapolis. Witnesses took the stand to describe their frustration and feelings of helplessness as the officer ignored their pleas while kneeling on Mr. Floyd’s neck.

Darnella Frazier, 18, testified that she sometimes lies awake at night, “apologizing to George Floyd for not doing more and not physically interacting and not saving his life.”

Fear is not the only factor that determines whether bystanders act in such moments. Bibb Latané, a social psychologist who helped pioneer the field of bystander intervention in the years following the Kitty Genovese murder, described another dynamic at play: the diffusion of responsibility that can lead to inaction among strangers who witness a crime.

A Rise in Anti-Asian Attacks