Helen Mirren, 75, is the picture of elegance in a show-stopping pink and red gown as she poses for glamorous snaps ahead of the SAG Awards

Helen Mirren was the picture of elegance as she posed for a collection of glamorous snaps ahead of the 2021 SAG Awards.

The actress, 75, looked radiant in a show-stopping pink and red gown that featured three-quarter length balloon sleeves and a plunging neckline.

With her grey hair swept up into a chic bun, Helen oozed Hollywood glamour as she posed up a storm on an LA balcony. 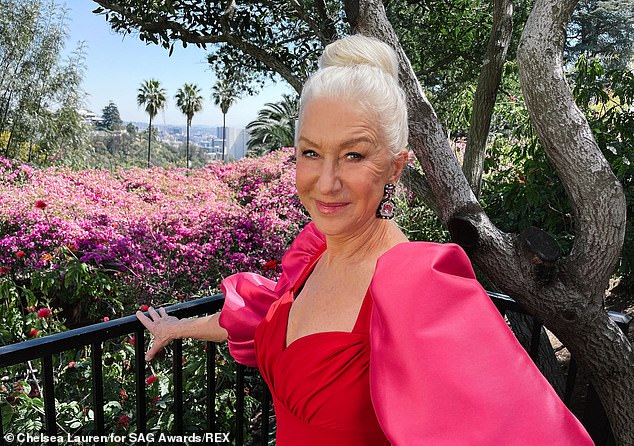 Iconic: Helen Mirren, 75, has posed for her official SAG Awards portrait, and the Oscar-winner is the picture of elegance in the striking photos

Backdropped by palm trees and fuchsia flowers, The Queen star accessorised with drop diamond earrings and accentuated her features with a swipe of pink lipstick.

Helen will present an award during the 27th Screen Actors Guild Awards.

Ahead of this Sunday’s ceremony – which is going ahead hostless – photographers remotely shot portraits of the evening’s nominees and presenters in line with pandemic guidelines.

As for award nominees, the late Chadwick Boseman, Schitt’s Creek’s Catherine O’Hara, Bridgerton’s Regé-Jean Page and Promising Young Woman’s Carey Mulligan are among those up for gongs. 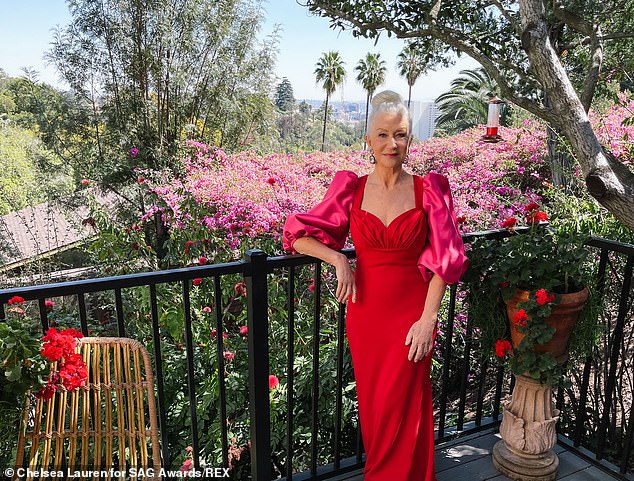 Lovely: Backdropped by palm trees and fuchsia flowers, The Queen star accessorised with drop diamond earrings and accentuated her features with a swipe of pink lipstick

The release of the A-lister’s stunning portrait comes weeks after she said her marriage has been made ‘normal’ and it’s been ‘great’ to spend lots of time ‘bonding’ with her husband Taylor Hackford amid the pandemic.

Helen explained how she and her director partner, 76, usually jet around the world for work but have stayed home for much of the last year.

Reflecting on how their relationship has changed because of travel restrictions in a new interview with The Telegraph’s Stella Magazine, the star said they’ve enjoyed getting to experience have ‘what most people have’. 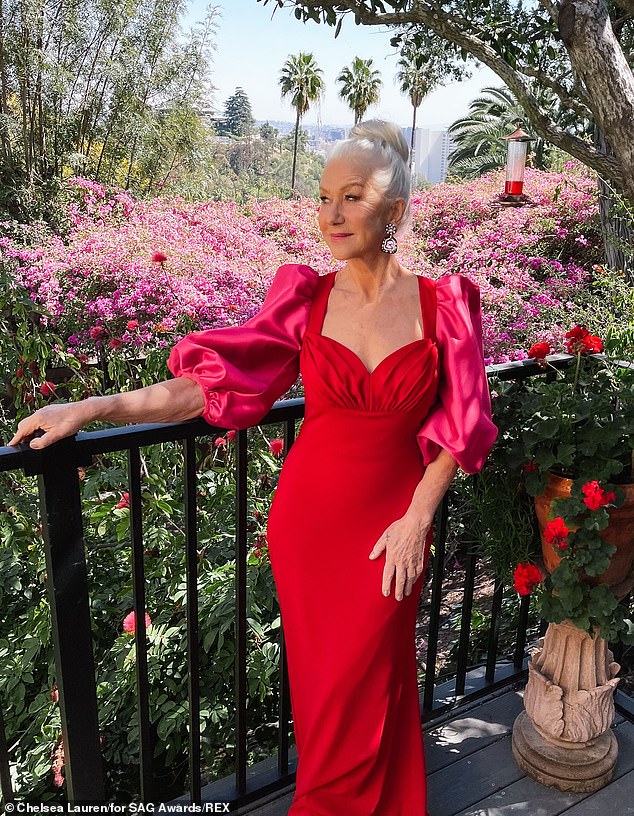 Exciting: Helen will present an award during the 27th Screen Actors Guild Awards

Helen explained that despite being married for ’30-something years’, they’ve not really had the chance to spend such a long period of time together.

She said: ‘In all that time [their marriage] because of the nature of both of our work we’ve always been looking at suitcases, at packing.

‘We have literally never spent this amount of time together. [The year] could have been disastrous but has actually been fantastic.

‘It’s been really great to just sort of have what most people have. You know, normal, regular, repetitive lives, but comfortable lives.’

The star added that she and Taylor, who live in Lake Tahoe, have been able to grow closer during the pandemic, saying it’s been a great ‘bonding experience.’

Helen and Taylor have been married for 24 years, after tying the knot in 1997. He has been wed twice before and has two children.

The actress and director were also together for 11 years before saying I do. 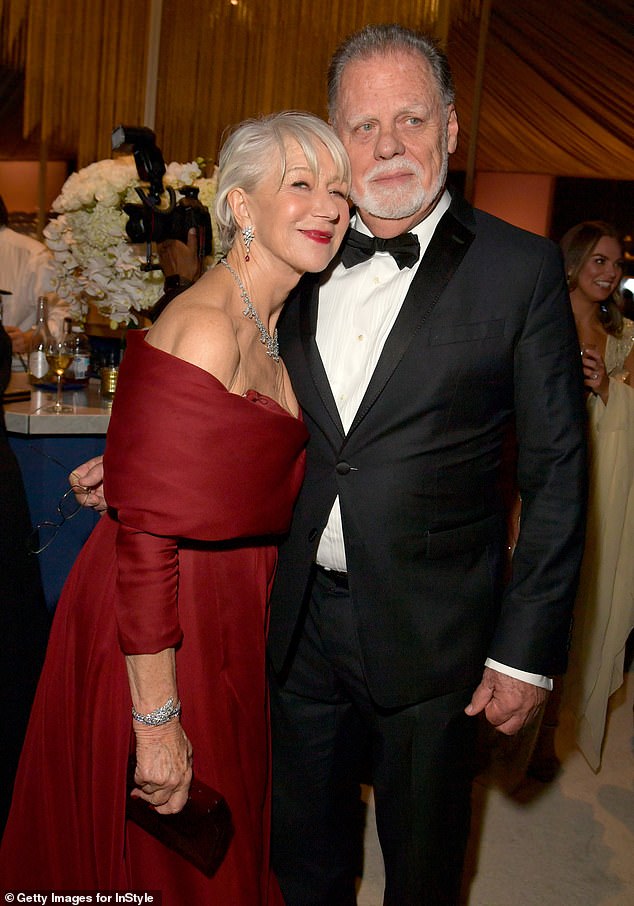 Couple: The release of the star’s portrait comes after she said it’s been ‘great’ to spend lots of time ‘bonding’ with husband Taylor Hackford, 76, amid the pandemic (pictured in 2020)

Cast in a Motion Picture

One Night In Miami

Trial of the Chicago 7

Male Actor in a Leading Role in a Motion Picture

Mank: Gary Oldman is up for Male Actor in a Leading Role in a Motion Picture

Female Actor in a Leading Role in a Motion Picture

Vanessa Kirby, Pieces of a Woman

Male Actor in a Supporting Role in a Motion Picture

Sacha Baron Cohen, The Trial of the Chicago 7 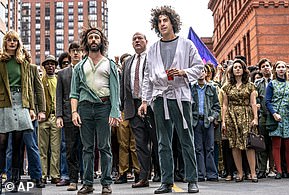 Up for one: Sasha Baron Cohen is also nominated for The Trial of the Chicago 7

Female Actor in a Supporting Role in a Motion Picture

Helena Zengel, News of the World)

Ensemble in a Drama Series 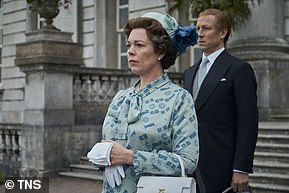 Leading the way: The Crown received an impressive five nods at the SAG Awards

Male Actor in a Drama Series

Sterling K. Brown, This Is Us

Female Actor in a Drama Series 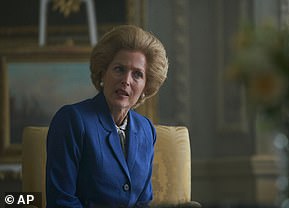 Crowned: Gillian Anderson has received a nod for her role in Netflix hit The Crown

Ensemble in a Comedy Series

Male Actor in a Comedy Series

Female Actor in a Comedy Series

Christina Applegate, Dead to Me

Linda Cardellini, Dead to Me

Male Actor in a Television Movie or Limited Series

Mark Ruffalo, I Know This Much Is True 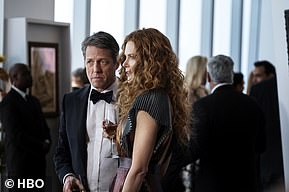 Drama: Hugh Grant and Nicole Kidman are also nominated for The Undoing

Female Actor in a Television Movie or Limited Series

Michaela Coel, I May Destroy You

Stunt Ensemble in a Motion Picture

News of the World

The Trial of the Chicago 7

Stunt Ensemble in a Comedy or Drama Series