Women who work outdoors in the sunshine are 17% LESS likely to get breast cancer ‘due to high vitamin D levels’, study claims

Women who work outdoors and are regularly exposed to high levels of sunlight are less at risk of developing breast cancer, a new study shows.

Danish researchers found that women who spent more than 20 years working outdoors had a 17 per cent lower chance of a breast cancer diagnosis.

The team hypothesises that the effect may be due to higher levels of Vitamin D, which is made by the body when it is exposed to sunlight. 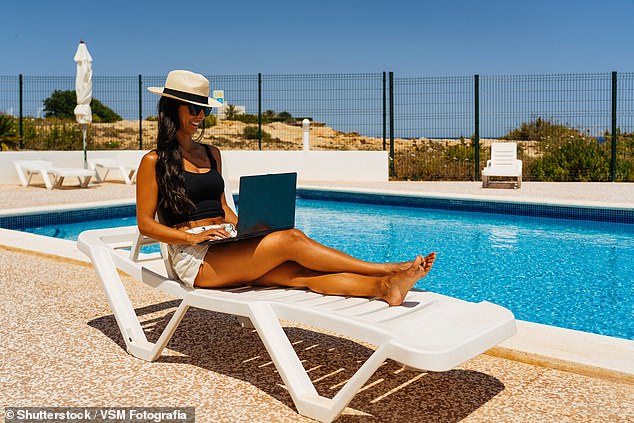 Women who work outdoors and are regularly exposed to high levels of sunlight are less at risk of developing breast cancer, a new study shows (stock)

Vitamin D is produced from sunlight exposure at very high levels of UVB radiation, which occurs mostly between 10am and 3pm.

As a result, outdoor workers are more likely to have elevated vitamin D levels.

In the study researchers identified 38,375 women under the age of 70 who had been diagnosed with primary breast cancer from the Danish Cancer Registry.

Each individual was compared with five random women born in the same year from the Danish Civil Registration System.

Full employment history was analysed for each individual to see if there was an association between profession, sunlight exposure and breast cancer prevalence.

This comparison revealed outdoor workers of more than two decades were almost a fifth (17 per cent) less likely to get breast cancer.

Meanwhile, those with the highest level of cumulative exposure had odds that were 11 per cent lower than those who worked indoors, according to the findings published online in the BMJ.

Danish researchers believe high levels of vitamin D, which is made by the body when exposed to sunlight as well as after eating specific foods, may be behind the link

Soaking up the sun is an activity that many of us enjoy at every stage of life, but a new study has warned of the particular dangers of UV exposure to women after they have been through the menopause.

Researchers say that spending too much time in the sun can affect post-menopausal women’s oestrogen levels, which can lead to a range of health issues.

These can include osteoporosis, cardiac diseases and neurodegenerative diseases, such as Alzheimer’s disease, according to previous research.

Based on the findings, the researchers say that sun exposure needs to be carefully monitored, and advise wearing suncream if you’re spending longer than 15 minutes in the sun.

The researchers suggest that the effect may be due to higher levels of Vitamin D, which is made by the body when it is exposed to sunlight.

Julie Elbæk Pedersen, study author from the Danish Cancer Society, told MailOnline: ‘The main hypothesis is that sun exposure through vitamin D production may decrease the risk of breast cancer after age 50.

‘Women who work outdoors may regularly be exposed to sunlight and thereby have more sufficient long-term levels of vitamin D compared with women working indoors.’

Sun exposure in the general population has fallen over recent decades due to the rise of office-based and computer-centric work, contributing to a lack of vitamin D.

In many parts of the world, vitamin D deficiency affects large swathes of the population, with people with darker skin affected disproportionately.

Vitamin D has previously been strongly linked with improving bone health, with debated evidence indicating it also helps fight off infections — including Covid-19 —and cancer.

While vitamin D levels have dropped, breast cancer rates have soared, with it now the most common cancer in the UK, with one woman diagnose every minutes.

But over recent decades the cases of breast cancer have increased. This coincides with a period of increasingly common vitamin D deficiency.

The findings come shortly after a study found that human migration over the last 500 years from sunny places to colder, darker more northerly homes has led to a surge in the number of people suffering from vitamin D deficiencies.

Academics created a computer model to calculate the difference in exposure to UV rays from the sun in both a person’s ancestral and current location.

They found going to places with lower levels of sunlight can result in vitamin D deficiency, which is directly associated with higher risk of mortality from illnesses including cardiovascular disease, diabetes, hypertension, and certain cancers.

Recent research even finds that vitamin D affects the severity of COVID-19.

Officials estimate one in five Britons are deficient in vitamin D — the equivalent of 13million Britons.

The vitamin has recently been linked to Covid-19, with several studies finding it offers protection against the virus.

Conservative backbencher David Davis MP has called for the UK Government to distribute vitamin D supplementation to society’s most at-risk of Covid-19.

Mr Davis says Britain should follow the lead of the Spanish region of Andalusia in the south of Spain, which distributed calcifediol, a vitamin D supplement, to care home residents in November.

Since then, Andalusia’s figure for deaths per million from Covid-19 has dropped from 187 in November to just 11 at the start of January, and is on track for just 33 for the month, an 82 per cent drop from November.

What have studies into vitamin D and Covid-19 shown?

By who? Cordoba University in Spain.

What did scientists study? 50 Covid-19 hospital patients with Covid-19 were given vitamin D. Their health outcomes were compared with 26 volunteers in a control group who were not given the tablets.

What were the study’s limitations? Small pool of volunteers. Patients’ vitamin D levels were not checked before admission. Comorbidities were not taken into consideration.

By Who? University of Chicago.

What did scientists study? 500 Americans’ vitamin D levels were tested. Researchers then compared volunteers’ levels with how many caught coronavirus.

What did they find? 60 per cent higher rates of Covid-19 among people with low levels of the ‘sunshine vitamin’.

What were the study’s limitations?

Researchers did not check for other compounding factors. Unclear whether or not volunteers were vitamin D deficient at the time of their coronavirus tests. People’s age, job and where they lived – factors which greatly increase the chance of contracting the virus – were not considered.

What did scientists study? Analysed data from 235 hospitalized patients with Covid-19.

What did they find? Patients who had sufficient vitamin D – of at least 30 ng/mL— were 51.5 per cent less likely to die from the disease. They also had a significantly lower risk of falling seriously ill or needing ventilation. Patients who had plenty of the nutrient also had less inflammation – often a deadly side effect of Covid-19.

What were the study’s limitations? Confounding factors, such as smoking, and social economic status were not recorded for all patients and could have an impact on illness severity.

By Who? Tel Aviv University, Israel.

What did scientists study? 782 people who tested positive for coronavirus had their vitamin d levels prior to infection assessed retrospectively and compared to healthy people.

What were the study’s limitations?  Did not look at underlying health conditions and did not check vitamin D levels at the time of infection.

By Who? Brussels Free University.

What did scientists study? Compared vitamin D levels in almost 200 Covid-19 hospital patients with a control group of more than 2,000 healthy people.

What did they find? Men who were hospitalised with the infection were significantly more likely to have a vitamin D deficiency than healthy men of the same age. Deficiency rates were 67 per cent in the COVID-19 patient group, and 49 per cent in the control group. The same was not found for women.

By who? Inha University in Incheon, South Korea.

What did scientists study? 50 hospital patients with Covid-19 were checked for levels of all vital vitamins and compared to a control group.

What did they find? 76 per cent of them were deficient in vitamin D, and a severe vitamin D deficiency (<10 ng/dl) was found in 24 per cent of Covid-19 patients and just 7 per cent in the control group.

What were the study’s limitations?

By Who?. Independent scientists in Indonesia.

What did they find? Almost 99% of patients who died had vitamin D deficiency. Of patients with vitamin D levels higher than 30 ng/ml  – considered optimal – only  per cent died.

What were the study’s limitations?  It was not peer-reviewed by fellow scientists, a process that often uncovers flaws in studies.

By Who? University of Glasgow.

What did scientists study? Vitamin D levels in 449 people from the UK Biobank who had confirmed Covid-19 infection.

What did they find? Vitamin D deficiency was associated with an increased risk in infection – but not after adjustment for con-founders such as ethnicity. It led to the team to conclude their ‘findings do not support a potential link between vitamin D concentrations and risk of Covid-19 infection.’

What were the study’s limitations?  Vitamin D levels were taken 10 to 14 years beforehand.

By Who? University of East Anglia.

What did scientists study? Average levels of vitamin D in populations of 20 European countries were compared with Covid-19 infection and death rates at the time.

What did they find? The mean level of vitamin D in each country was ‘strongly associated’ with higher levels of Covid-19 cases and deaths. The authors said at the time: ‘The most vulnerable group of population for Covid-19 is also the one that has the most deficit in vitamin D.’

What were the study’s limitations?  The number of cases in each country was affected by the number of tests performed, as well as the different measures taken by each country to prevent the spread of infection. And it only looked at correlation, not causation.

By Who? Northwestern University.

What did scientists study? Crunched data from dozens of studies around the world that included vitamin D levels among Covid-19 patients.

What did they find? Patients with a severe deficiency are twice as likely to experience major complications and die.

What were the study’s limitations?  Cases and deaths in each country was affected by the number of tests performed.