Also top of mind for Nathwani: how it all could go wrong.

The pharmaceutical industry has to make sure “we develop trust for the patient and physician, because this black box scenario isn’t going to be sustainable,” Nathwani told Business Insider during a phone interview last month.

Safeguarding against biases, privacy problems and cyberattacks are wrapped up in that, Nathwani said. That’s spurred Sanofi to develop policies around the use of AI, to ensure digital tech is built and tested as carefully and rigorously as traditional medicines.

Never miss out on healthcare news.Subscribe to Dispensed, our weekly newsletter on pharma, biotech, and healthcare.

A physician who’s worked in the pharmaceutical industry for 25 years, Nathwani was already Sanofi’s chief medical officer when he was appointed chief digital officerin February. The position has become an emerging trend among big pharma companies likePfizer andGlaxoSmithKline.

“It’s evolved at a remarkable pace,”Nathaniel Hook, managing director of global life sciences at the executive search firm WittKieffer, told Business Insider. “If you asked me five years ago, it was almost unheard of. Now I think the majority of pharma companies have hired a CDO type.”

Tech has become a new priority at pharmaceutical companies as the sector moves towards more personalized drugs that treatsmaller groups of patients, driving a need for cost-effective technological tools, Hook said. Pharma companies are hiring chief digital officers to lead digital marketing, spearhead machine learning and AI in their drug research and development, and bring tech to streamline areas like supply chain operations.

Nathwani’s medical background means he’s not the classic pick for chief digital officer, but it’s also given him a unique perspective on how to develop drugs in a digital age, he told Business Insider.

A digital health revolution going on today is giving patients new perspectives on their health throughDNA testing,personal technology like the Apple Watch andconnected medical equipment such as glucose monitors for people with diabetes. Nathwani said his goal is to create new business opportunities there.

Read more:Pharma giants like Novartis and Sanofi are betting that the future of healthcare looks more like an app or sensor than a prescription

So in addition to selling traditional medications like insulin for individuals with diabetes, Sanofi is now also investing in digital offerings. That includes products to complement existing medications, an approach it calls “drugs plus,” and digital therapies that could actually treat patients on their own.

Harnessing the addictiveness of gaming to treat depression and anxiety 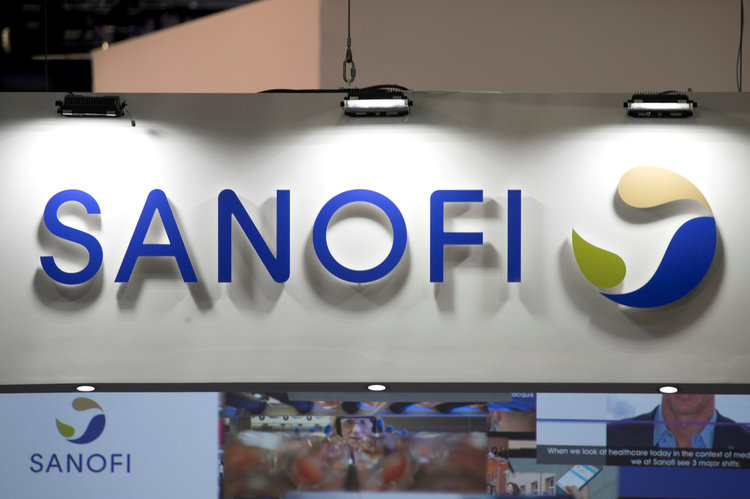 A Sanofi sign is pictured at the Viva Tech start-up and technology summit in Paris.ReutersCould an app treat conditions like depression and anxiety?

That’s the question being asked by a new pilot program from Sanofi and the mental-health startup Happify. Led by two entrepreneurs whose previous venture was a gaming company, Happify makes an online platform geared at improving symptoms of stress, anxiety and depression through behavior change.

The tech could have applications in depression and many other diseases that are long-term and often accompanied by depression, Nathwani said. Ultimately, the hope is that the tech could lead to better outcomes for patients who have both mental and physical illnesses.

In the pilot, the companies are testing the startup’s technology in individuals living with multiple sclerosis. The hope is to address their depression as well as multiple sclerosis symptoms like fatigue and difficulty with movement.

“What we’re looking to say is: Can we manage depression in a formal way by creating a describable digital therapeutic,” he said, “and will the underlying condition also improve?”

“If they both improve, that’s a pretty compelling story,” Nathwani said.

He said that other promising areas for this technology include heart conditions, metabolic diseases like diabetes, pain, weight management, and insomnia.

Read more:VCs in the hottest part of healthcare explain why the time is ripe for a mental health funding boom

The promise and perils of AI

AI technology allows the Happify pilot and other digital therapeutics to deliver customized advice and feedback to users. And more broadly, AI tech has taken off in the pharmaceutical industry, where it’s being used to discover anddevelop promising new drugs and change how medicationsare tested out.

Read more: A startup using AI to find new treatments for rare diseases just raised $121 million. Here’s why its CEO still has a dire prediction for the industry.

But the technology also brings up major issues, including the potential for discrimination. The US Food and Drug Administration said in April that it’s starting tolook at regulating the tech, but a policy could take some time to emerge.

Bias can seep into tech in a variety of ways, including through discrepancies in the data that’s used to train AI models and via programmers, who may have their own prejudices. Cybersecurity and privacy are also concerns in an era when cyber-attackers areincreasingly targeting healthcare companies.

That’s why Sanofi is working on a policy for AI that outlines how it’s overseen and puts checks in place, like a ledger that tracks source data and how the tech is developed from it.

Nathwani compared the policies to the ” good manufacturing practices” that drugmakers have to follow so that their products are safe to sell. The 21st century version, in his view: a “good digital practice.”

In the same way that drugmakers know exactly what goes into traditional drugs, “we have to have the ingredients of digital drugs as well,” Nathwani said. “We don’t want to get into an issue of an algorithm causing harm which we can’t then track back” to how it was developed.