Froggy style: Brazilian frog stays in an exclusive ‘throuple’ throughout the breeding season with two females remaining loyal to the same male mate

The Brazilian male frog remains has two female mates who remain loyal to him throughout the breeding season, a new study reveals.

Thoropa taophora frogs, native to the Brazilian Atlantic rainforest, are the first amphibian to reveal signs of ‘single-male polygyny with fidelity’ (SMPF).

This phenomenon describes a group consisting of multiple females and one male, which mates with more than one of the females.

Scientists have previously seen this form of social organisation in bony fish, reptiles, mammals, birds, and even some invertebrates.

The new discovery means SMPF is now found to occur in species from all types of four-limbed animals. 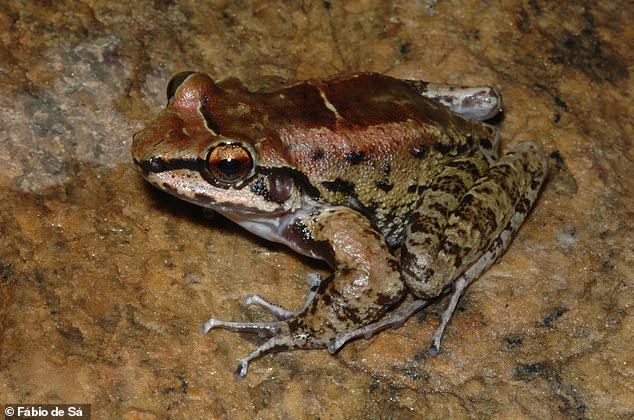 Male of Thoropa taophora on Sununga beach, Ubatuba, Brazil. The species of frog native to the Brazilian Atlantic rainforest appears to be the first amphibian shown to exhibit harem polygyny

‘Single-male polygyny with reproductive fidelity occurs in invertebrates, bony fishes, and some tetrapods such as lizards, mammals, and birds,’ said Professor Fabio de Sá, from the Universidade Estadual Paulista in São Paulo in Brazil.

‘In amphibians, reproductive fidelity in polygynous groups is not fully demonstrated.

‘We reveal high fidelity during a prolonged breeding season in a Neotropical polygynous frog.’

Monogamy – having just one mate – has evolved in many vertebrate clades, including amphibians, enabling parents of some species to invest greater resources into their offspring. 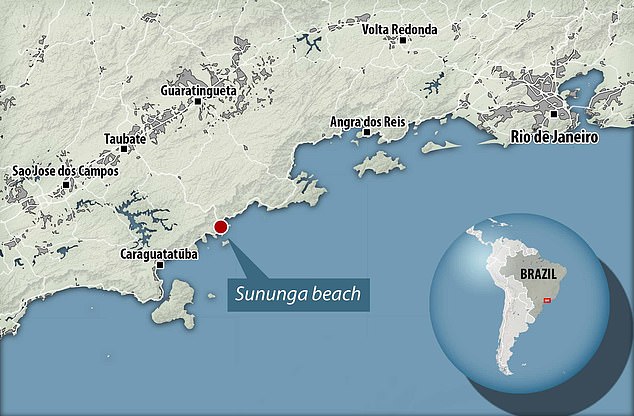 Researchers documented males and females under their natural conditions around Sununga beach, Ubatuba in south-western Brazil

But polygyny, where males have more than one wife or life partner, remains the norm among many vertebrates.

To explore whether the Brazilian male frog engages in polygyny, Fabio de Sá and colleagues video documented males and females under their natural conditions around Sununga beach, Ubatuba in south-western Brazil.

Frogs inhabit seeps – little patches where groundwater accumulates from the ground to the surface.

The team investigated seven breeding seeps, and all of them showed the same pattern – one monopolist male mating with two females (one dominant, one secondary).

‘They do not change mates throughout the breeding season.’

The experts noted protective male behaviours, such as patrolling their territory, emitting aggressive calls to ward off intruders, and remaining close to their eggs and tadpoles to protect them. 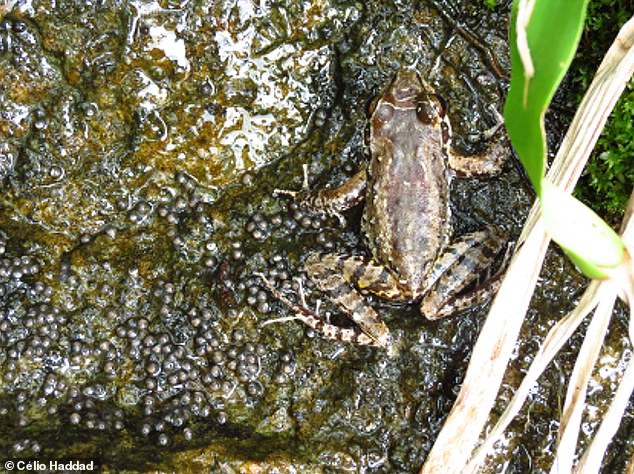 In contrast, when a secondary female would eat eggs, the male would merely embrace her without mating until she stopped.

Dominant females contributed somewhere between 56 per cent and 97 per cent of tadpoles in the seven breeding seeps analysed.

‘In Thoropa taophora the monopolist male is always defending the same breeding seep, so they do not move,’ de Sá told MailOnline.

‘The females are the sex that can move to choose a mate – females are attracted by the male calls.’ 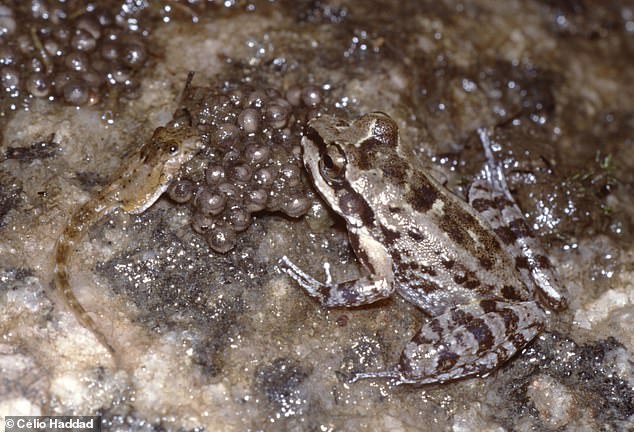 The research team also reconstructed parental genotypes of tadpoles at breeding locations, which verified that a female’s hierarchy in the harem greatly impacted her breeding success.

The frogs’ style of group fidelity may have evolved in response to competition for breeding sites and rivalries between males looking for mates.

‘Single-male polygyny with fidelity is the particular polygyny in which females show group fidelity with a single monopolist male throughout an extended period,’ de Sá told MailOnline.

‘The coolest thing is that the typical mating system of frogs is now extended.’

The study has been published in Science Advances.

THE BIOLOGY BEHIND ANIMAL POLYGAMY

Polygyny, where one male mates with more than one female while each female mates with only one male, is thought to be the fundamental mating system of animals.

Males therefore make a smaller investment in the embryos that result from the fusion of egg and sperm cells.

The difference is especially pronounced in birds, since the sperm is microscopic and the egg (relatively) gigantic.

The male thus puts proportionately little effort into any single embryo, while the female has a great stake in each one, since she can produce relatively few eggs in her lifetime.

Females must therefore exercise care in choosing the fathers of their limited number of young.