Titanic mystery is SOLVED: Strange ‘blip’ detected in 1998 near the shipwreck was caused by an ‘abyssal ecosystem’ teeming with sponges, corals and fish, study reveals

When divers received a mysterious ‘sonar blip’ during a dive to the remains of the Titanic in 1998, they were puzzled.

At the time, they thought the sonar transmission in the North Atlantic Ocean was caused by a second shipwreck, a geologic feature or something else entirely.

Now, 24 years later, researchers have found that the blip was caused by a rich underwater ecosystem teeming with sponges, corals, squat lobsters and fish.

Video footage shows the ‘awe-inspiring’ environment that was discovered, which is more than 9,500 feet (2,900 metres) deep off the coast of Newfoundland, Canada. 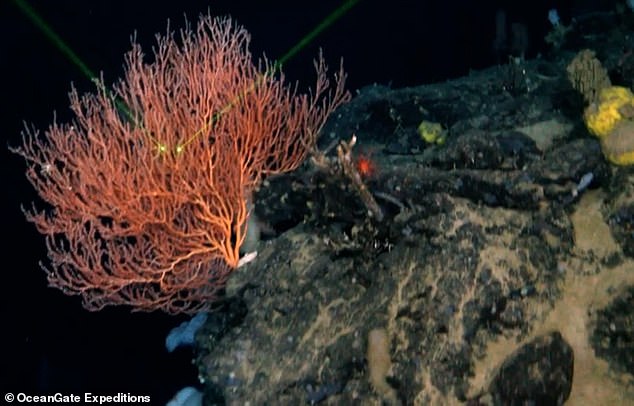 During the 2022 Titanic Expedition, a rich and dense ecosystem was discovered more than 9,500 feet (2,900 metres) deep near the wreck of the Titanic 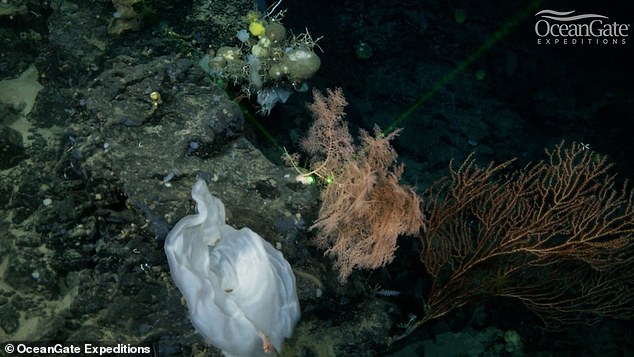 Sonar, short for Sound Navigation and Ranging, is the use of sound waves to ‘see’ underwater.

Sonar is used to explore and map the ocean as sound waves travel farther in water than radar and light waves.

Experts use sonar to develop nautical charts, locate underwater hazards to navigation, search for and map objects on the seafloor such as shipwrecks, and map the seafloor itself.

The mystery has been solved thanks to a new expedition conducted by OceanGate Expeditions this summer to the remains of the luxury liner.

Titanic sank on April 15, 1912, after a collision with an iceberg, and what’s left of it lies on the seafloor around 350 nautical miles off the coast of Newfoundland.

OceanGate Expeditions said the sonar transmission in 1998 was ‘eerily similar’ to that of the Titanic, but instead of a shipwreck, it stemmed from the ecosystem on a previously unknown basalt formation.

‘This discovery will improve the way we think about biodiversity of the abyss,’ said Dr Steve W Ross, OceanGate Expeditions chief scientist.

‘We are astonished at the diversity and density of the sponges, bamboo corals, other cold-water corals, squat lobsters, and fishes that are thriving at 2,900 meters deep in the North Atlantic Ocean.

‘Uncovering this previously unknown ecosystem also provides an opportunity to make a comparison to the marine biology on and around Titanic.’

The wreck of a long-lost World War I German U-boat that sank a century ago was discovered by a sleuthing diver off the coast of Virginia.

The SM U-111 was a 235-foot ship that sank three Allied merchant ships in the Atlantic Ocean during its time with the German Imperial Navy.

This summer’s expedition took place in a submersible called Titan, outfitted with cameras that capture ultra-high-resolution imagery to determine the wreck’s rate of decay.

In 1998, Paul Henry Nargeolet, a diver who has visited the wreck site in the North Atlantic more than 30 times, discovered the blip.

Nargeolet, who was part of the expedition that returned to the area in the summer, said his team didn’t know what it would discover.

‘On the sonar, this could have been any number of things including the potential of it being another shipwreck,’ he said.

‘I’ve been seeking the chance to explore this large object that appeared on sonar so long ago.

‘It was amazing to explore this area and find this fascinating volcanic formation teeming with so much life.’

DNA analysis of the water samples collected will be analysed and shared at a future date, the researchers said.

OceanGate Expeditions’ research work around the Titanic and surrounding areas will also continue into 2023. 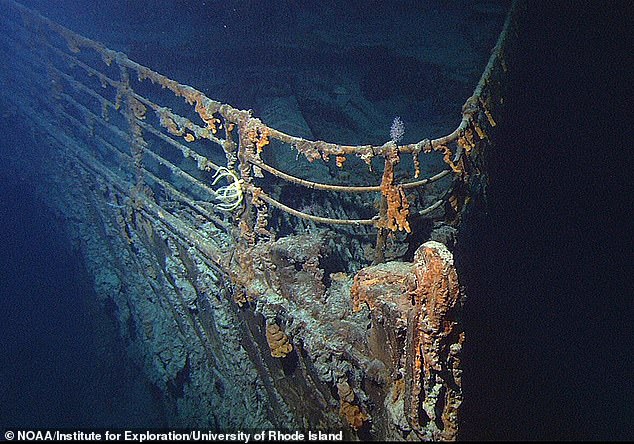 Constructed by Belfast-based shipbuilders Harland and Wolff between 1909 and 1912, the RMS Titanic was the largest ship afloat of her time.

Owned and operated by the White Star Line, the passenger vessel set sail on her maiden voyage from Southampton to New York on April 10, 1912.

The liner made two short stops en route to her planned Atlantic crossing – one at the French port of Cherbourg, the other at Cork Harbour, Ireland, where smaller vessels ferried passengers on and off board the Titanic.

Nearly five days into her voyage, the Titanic struck an iceberg at around 23:40 local time, generating six narrow openings in the vessel’s starboard hull, believed to have occurred as a result of the rivets in the hull snapping.

Around 1,500 people were believed lost in the tragedy, including around 815 of the liner’s passengers.

DISASTER IN THE ATLANTIC: HOW MORE THAN 1,500 LOST THEIR LIVES WHEN THE TITANIC SUNK

The RMS Titanic sank in the North Atlantic Ocean on April 15, 1912, after colliding with an iceberg during her maiden voyage from Southampton to New York.

More than 1,500 people died when the ship, which was carrying 2,224 passengers and crew, sank under the command of Captain Edward Smith.

Some of the wealthiest people in the world were on board, including property tycoon John Jacob Astor IV, great grandson of John Jacob Astor, founder of the Waldorf Astoria Hotel. 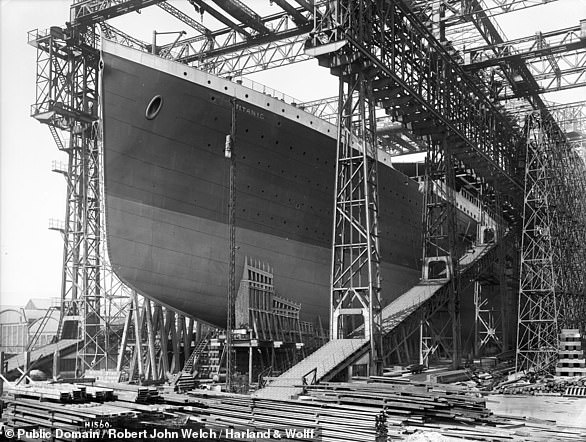 Constructed by Belfast-based shipbuilders Harland and Wolff between 1909 and 1912, the RMS Titanic was the largest ship afloat of her time

The ship was the largest afloat at the time and was designed in such a way that it was meant to be ‘unsinkable’.

It had an on-board gym, libraries, swimming pool and several restaurants and luxury first class cabins.

There were not enough lifeboats on board for all the passengers due to out-of-date maritime safety regulations.

After leaving Southampton on April 10, 1912, Titanic called at Cherbourg in France and Queenstown in Ireland before heading to New York.

James Moody was on night watch when the collision happened and took the call from the watchman, asking him ‘What do you see?’ The man responded: ‘Iceberg, dead ahead.’

By 2.20am, with hundreds of people still on board, the ship plunged beneath the waves, taking many, including Moody, with it.

Despite repeated distress calls being sent out and flares launched from the decks, the first rescue ship, the RMS Carpathia, arrived nearly two hours later, pulling more than 700 people from the water.

It was not until 1985 that the wreck of the ship was discovered in two pieces on the ocean floor.