The pressures of sexual selection have made peacocks gorgeous, wood thrushes sonorous and birds of paradise great dancers. At first glance, the white bellbird doesn’t appear to have benefited similarly. Barrel-chested and big-mouthed, with a long wattle dangling from the top of its beak, this rainforest bird looks more like a Muppet than an avian Casanova.

But everyone’s got their thing. According to a paper published Monday in Current Biology, this goofball boasts the loudest birdsong ever recorded. And he must be proud of it, because he sings the most piercing note right into potential mates’ faces.

The white bellbird — one of four bellbird species in South and Central America — is a favorite among birders in Brazil. It has a “strange, metallic, kind of alien call,” said Caio Brito, one of the founders of Brazil Birding Experts. When several sing at once, they are “deafening,” and sound like “several blacksmiths trying to compete,” said Arthur Gomes, a biology student at São Paulo State University who contributed to the new research. 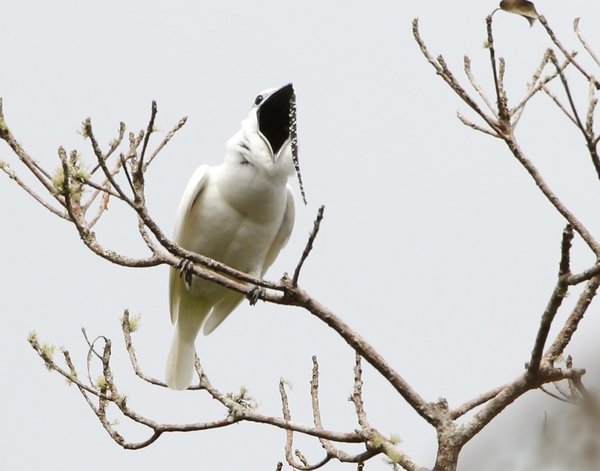 Mario Cohn-Haft, the curator of birds at the National Institute of Amazonian Research in Brazil and one of the authors of the study, regularly travels to understudied rainforest areas to survey birds and other species. On a 2017 trip to the Serra do Apiaú, a peak in northeast Brazil, he encountered bellbirds, which tend to live at high altitudes. They are “the soundtrack of the mountain,” he said. “You can hear them from a mile away.”

While examining a bellbird specimen during that trip, Dr. Cohn-Haft was struck by the thickness of its abdominal wall. It had “this really ripped, washboard stomach,” he said. He thought it might have something to do with the loudness of their song — “if they didn’t have that kind of protection,” he said, perhaps “their guts would blow out.”

He sent photos to Jeffrey Podos, a professor specializing in bioacoustics at the University of Massachusetts at Amherst, who was similarly intrigued. A year later, the two led a team that further studied the bird.

Until a few years ago, assessing the amplitude, or loudness, of birdsong required an unusual amount of devotion and tech-savvy. Only a couple of dozen species have been properly measured, said Dr. Podos.

But new tools are making the pursuit much easier. For their expedition in 2018, Dr. Podos and Dr. Cohn-Haft brought sound level meters more commonly used for industrial-noise monitoring, along with laser range-finders to pinpoint how far away the birds were.

At the top of the mountain, they measured two vocalizations made by the white bellbird: a longer, more elaborate song, and a shorter, more intense one.

The white bellbird’s second song type is louder than a jackhammer, and approaches, “at its peak, the amplitude of a pile driver” — around 125 decibels, said Dr. Podos. That makes it three times more intense than the call of the screaming piha, the previous record-holder for loudness.

The researchers also discovered a trade-off between song length and amplitude — the more intense the song’s peak, the less time it lasted. “If sexual selection keeps pushing the song to be louder and louder, it’s going to become shorter and shorter,” said Dr. Podos.

This, along with the song’s simplicity, is in keeping with “a pattern of evolutionary trade-offs between sound amplitude and song complexity,” said Gonçalo Cardoso, a researcher at the University of Porto who was not involved in this study.

One big mystery remains. The white bellbird sings its pile driver tune when a potential mate is nearby. It starts facing away from her, and then whips around to blast the loudest, record-setting note right into her face. This choreography puzzles experts: Many other birds, including the famously elaborate satin bowerbird, actually tone down their displays once a female expresses interest, so as not to startle her.

“I am surprised that the loudest bird makes loud sounds when the female is so close,” said Nicole Creanza, an assistant professor at Vanderbilt University who was not involved with the study. She said the findings went against her expectations, but called them “a great foundation for future research.”

“We never saw copulation — we never saw what a really good male does,” he said. “The ones we saw might have just been losers.”