It was a devastating summer for the Arctic.

In September, sea ice in the Arctic Ocean hit a low of about 1.4 million acres – the second-lowest on record, according to data from the National Snow and Ice Data Center. The only time it got lower was in 2012, when ice cover reached over just 1.3 million acres.

In the 1980s, ice covered at least 1 million more acres of ocean than it does now. In 1980, its minimum extent was 2.7 million square miles, according to NASA.

When it comes to ice on land, the picture is just as dire. Greenland is on track to lose more of its ice sheet this century than any other in the past 12,000 years, according to a recent study published in the journal Nature.

Weather patterns, like seasonal changes in atmospheric pressure, play a role in fluctuations in ice cover and loss. But climate change has overwhelmingly driven the dramatic increase in melting observed over the last 40 years.

"Absolutely we're seeing climate change at work because the warm summers become warmer and the cold winters aren't as cold as they were," Mark Serreze, director of the Snow and Ice Data Center, told the Associated Press.

The following 11 images reveal how melting ice has transformed the Arctic region.

Sea ice at the North and South Poles has shrunk dramatically over the last 30 years.

Toggle left and right in the image above to see how Arctic sea ice levels around Greenland have changed in spring and fall.

Melting sea ice doesn't contribute to sea-level rise, but it has been linked to increased storminess on the US East Coast and changes in jet-stream patterns. 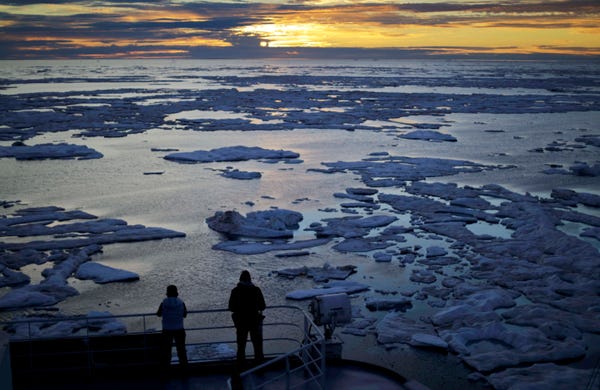 The jet stream is driven by differences between low temperatures in the Arctic and higher temperatures farther south.

"Because we're warming the Arctic so much faster, that north-south temperature difference is getting smaller, and the jet stream is getting weaker," Jennifer Francis, a senior scientist at the Woodwell Climate Research Center, told WBUR in Boston. 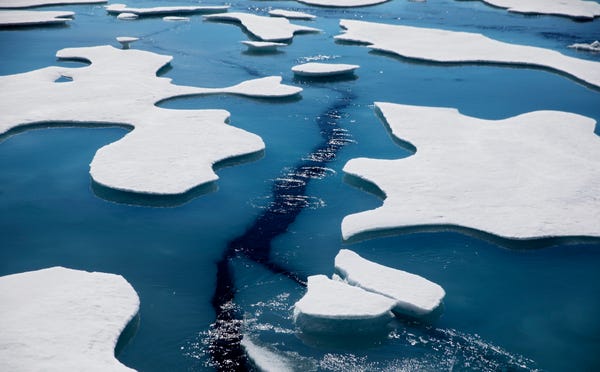 Over the past 20 years, the Arctic Ocean has warmed so much that air over the sea's surface forms towers of hot air. These towers travel toward the equator, intensifying the trade winds that lead to El Niño storms.

Melting sea ice affects Arctic animals like polar bears. A 2018 study found that polar bears in the region have been losing weight during late spring and early summer, when they should be packing on pounds to prepare for winter. 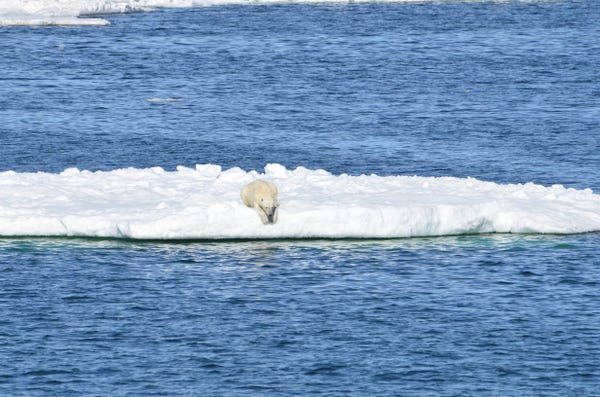 Polar bears use sea ice to hunt seals, the high-fat prey they need to survive. As ice melts, bears must swim between smallish chunks, which tires them and puts them at higher risk of hypothermia.

Land ice is also melting at an unprecedented rate: The two biggest ice sheets on Antarctica and Greenland are losing about 427 billion metric tons of ice per year. 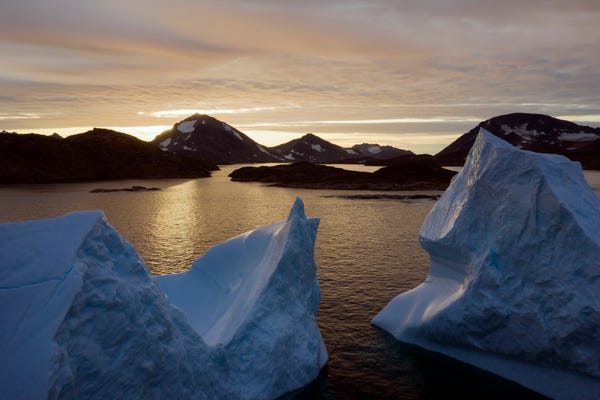 If the world's greenhouse-gas emissions keep going up as forecasted, Greenland will lose four times more ice this century than it has during any other since the end of the last Ice Age, according to the recent study.

That loss alone could raise sea levels by nearly 4 inches (10 centimeters) by the end of the century.

In 2015, researchers at the University of Alaska found that the state had lost 75 billion metric tons of glacier ice from 1994 to 2013.

Greenland is losing about 234 billion tons of land ice per year. 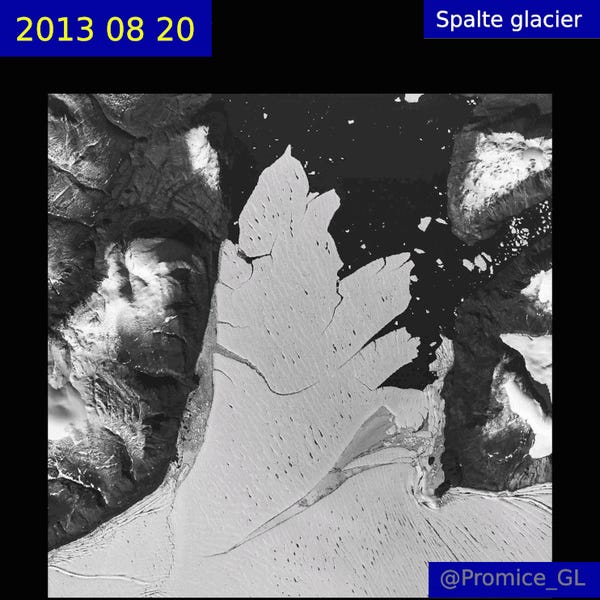 The Spalte Glacier, above, split off from its parent glacier in late June; it has since crumbled into numerous smaller icebergs, and no longer exists as a distinct glacier.

Greenland's ice melt might even have played a role in the death of climate scientist Konrad Steffen. 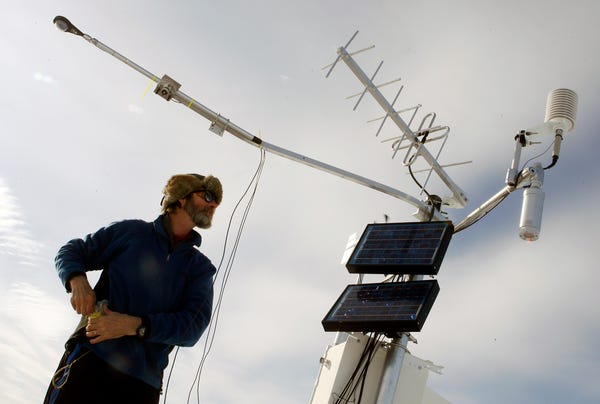 The 68-year-old Swiss scientist, who spent 30 years tracking Greenland's disappearing ice, fell into a deep crevasse in August after an ice sheet he was studying buckled beneath him.

Melting land ice goes into the ocean, where it causes sea levels to rise. 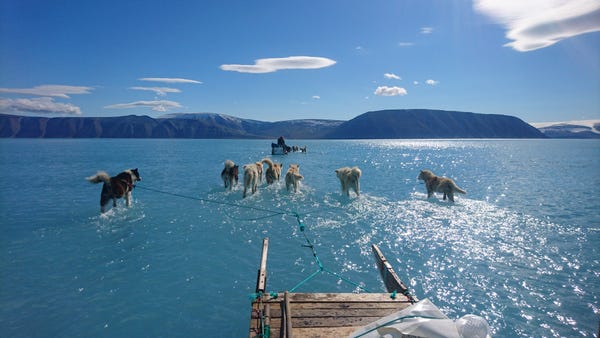 Greenland's Helheim Glacier, for instance, is sliding into the sea at a rate of 5 miles per year. 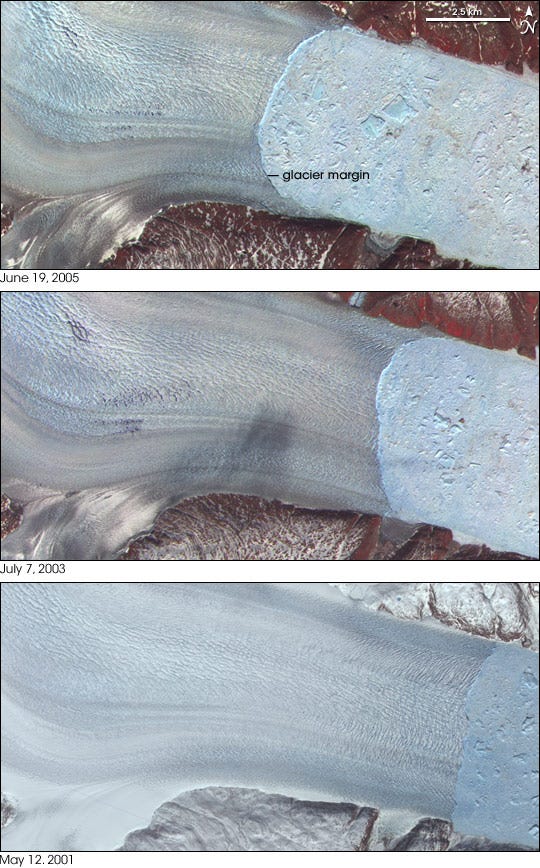 In the images above, the ice on the left is the Helheim glacier, while the chunky ice on the right is ice that has broken off into smaller icebergs that float in a fjord.

Between 1972 and 2019, the glacier's margin — the boundary where its ice is breaking off into the fjord — retreated about 4.7 miles. Today, the Helheim accounts for 4% of Greenland's annual ice loss.

Worldwide, sea levels could rise 10 to 12 feet by 2120 if global emissions continue unabated.

The prediction comes from a 2017 report by the National Oceanic and Atmospheric Administration. That rise in sea levels could cause major American cities – including Miami, Florida; New Orleans, Louisiana; and Houston, Texas – to disappear underwater.