Tetris has been one of the most popular digital games for decades, but it is now vanishing from people’s phones.

Gaming giant EA has said it is ‘time to say goodbye’ to the popular game, and that it will be formally retired on April 21, 2020.

Tetris was first created by a Soviet engineer in 1984 and is still popular as a cult favourite with some gamers, in spite of strong competition from the console juggernauts.

But the Tetris mantle has been picked up by another company, called N3twork, which has already released an official game for both Android and iOS. 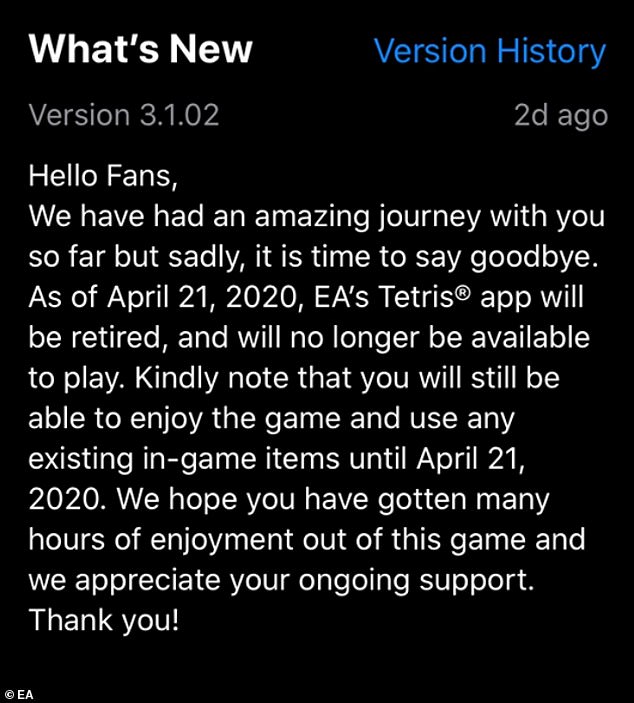 Gaming giant EA has said it is’time to say goodbye’ to the popular game and it will be formally retried on April 21, 2020 in a statement (pictured)

In its latest updates to the app on various platforms, an emotional message accompanied the EA Tetris game.

It read: ‘Hello Fans, we have had an amazing journey with you so far but sadly, it is time to say goodbye.

‘Kindly note that you will still be able to enjoy the game and use and existing in-game items until April 21, 2020.

‘We hope you have gotten many hours enjoyment out of this game and we appreciate your ongoing support. Thank you!’

N3twork signed an agreement last year to ‘exclusively develop and publish new Tetris games built from the ground up for mobile devices worldwide’.

It seems the licensing shift has seen EA bow out of the Tetris arena permanently.

N3twork is also working on a Tetris Royale game, but the latest version is the classic single-player version of the game players are so familiar with.

‘We’re launching Tetris with a traditional solo gameplay mode, but we want fans to know that we’ve got so much more in store for them, and this is just the foundation of an incredible Tetris app experience we’re building at N3twork,’ commented CEO Neil Young.