Bite club: Male T-rexes tore into each other’s faces as part of vicious competitions for mates or territory – but not hard enough to kill each other

We know Tyrannosaurus rex was the terror of the Late Cretaceous, but this apex predator would also engage in dino flight clubs with other T-rexes, according to a new report.

They theorize the creatures were biting each other on the face—not hard enough to kill, but to show who was top dog, er, dino.

The attacks were typically between animals of the same age and started after sexual maturity, the researchers said, suggesting they were fighting over potential mates, or possibly to claim territory or to move up in the pecking order. 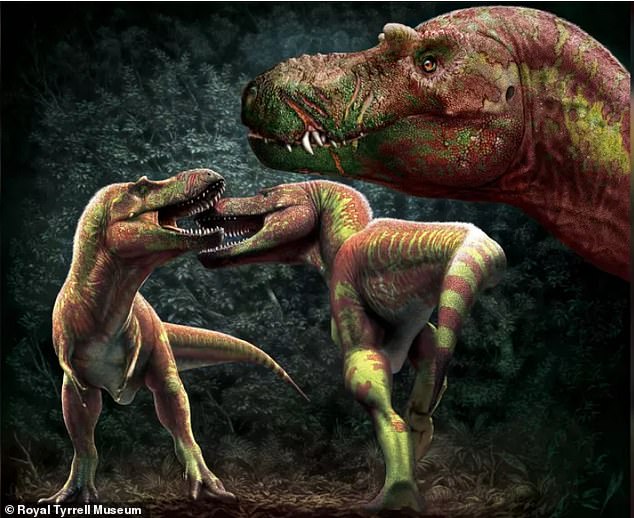 Nonlethal aggression between members the same species is ‘widespread’ in the animal world, according to their new study published in the journal Paleobiology, and ‘important to understanding animal behavioral ecology and reproductive systems.’

But it’s difficult to make accurate observations about how dinosaurs battled it out based on their modern-day descendants: Crocodiles frequently engage in physical attacks to establish dominance while birds usually rely on extreme visual and vocal cues.

Researchers at the Royal Tyrrell Museum in Alberta, Canada, began investigating after an upper jawbone with a series of long scars was discovered in Dinosaur Provincial Park in 2017.

‘These were likely tooth marks from another tyrannosaur that had healed, forming these raised ridges,’ lead author Caleb Brown, curator of dinosaur systematics and evolution at the Royal Tyrrell, told Live Science. 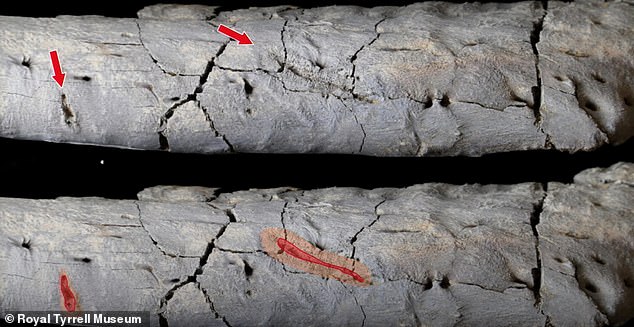 The location, depth and orientation of the strikes were similar across more than 100 specimens, suggesting it was ritualized behavior

While tyrannosaur skulls are often full of scars, no one had analyzed them systematically before to determine if they represented ritualized patterns of behavior.

Brown and his colleagues examined some 324 facial scars on skulls of 202 tyrannosaurid dinosaurs, including on Albertosaurus, Daspletosaurus and Gorgosaurus. 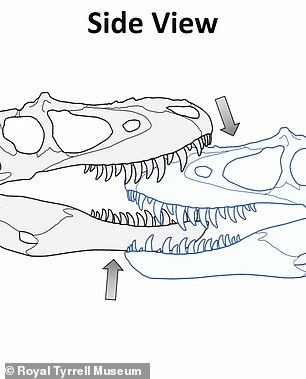 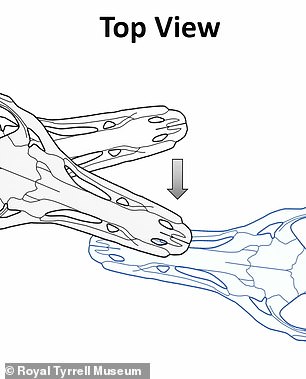 Based on the location of facial scars on tyrannosaurid dinosaurs, researchers at Alberta’s Royal Tyrrell Museum re-created what the attacks might have looked like

The paleontologists determined the scars were all similar in position and orientation, suggesting the chomps were inflicted ‘due to repeated/postured behavior.’ 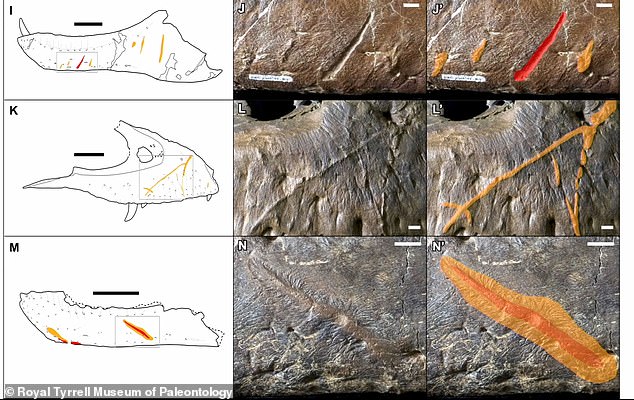 Examples of facial scars on tyrannosaurid jawbones. The marks only appeared on juvenile and adult specimens, suggesting the fights started after the onset of sexual maturity

‘Taken together, we can piece together how these animals were fighting,’ Brown told Live Science.

‘They were likely posturing and sizing each other up, then trying to grab each other’s heads between their jaws.’

The scars were elongated and tended to appear on the upper and lower jawbones, and included tooth puncture marks.

The marks didn’t appear on young tyrannosaurs, but were present in about half of the juvenile specimens and 60 percent of full-grown adults, suggesting the antagonistic behavior kicked in with the onset of sexual maturity.

It’s nearly impossible to determine a dinosaur’s sex, but the fact that just half the T-rexes had these scars may mean the in-fighting was done by only one gender.

That suggests these dust-ups were intended to establish dominance for mating purposes, the scientists said.

‘These animals are old enough to reproduce and are testing the waters to see how they rank compared to rivals or how they rate compared to potential mates,’ Brown told Live Science.

WHO WAS TYRANNOSAURUS REX?

Tyrannosaurus rex was a vicious species of bird-like, meat-eating dinosaur that lived between 68–66 million years ago in what is now the western side of North America.

It is the best-known species of the genus tyrannosaurus, which also includes  Albertosaurus, Daspletosaurus and Gorgosaurus.

To date, more than 50 fossilized T.Rex specimens have been collected.

An artist’s rendering of a T.Rex