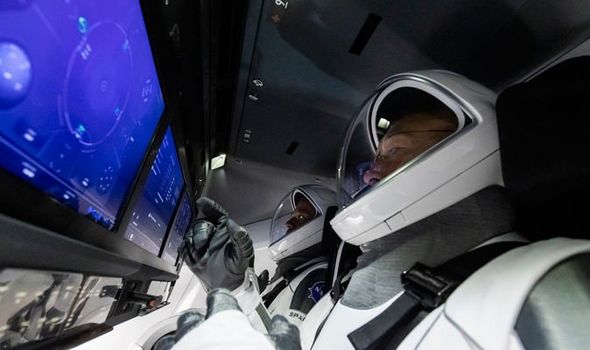 NASA astronauts Doug Hurley and Bob Behnken will return to earth later today after riding to the International Space Station. Their SpaceX Crew Dragon capsule is expected to splash down off the coast of Florida.

What time will the SpaceX capsule splashdown?

The astronauts undocked from the ISS at 12.35am this morning.

The Crew Dragon is expected to land at around 7.48pm UK time.

“It’s been a great two months, and we appreciate all you’ve done as a crew to help us prove out Dragon on its maiden flight,” Hurley told the remaining US station crew member Chris Cassidy.

Behnken said: “The hardest part was getting us launched, but the most important part is bringing us home.”

Billionaire entrepreneur Elon Musk’s SpaceX became the first private company to send humans to orbit on May 31 with the launch of Behnken and Hurley, who will have spent more than two months on the space station upon returning.

The mission marked the first time NASA launched humans from US soil since its shuttle program retired in 2011.

Since then the United States has relied on Russia’s space program to launch its astronauts to the space station.

NASA officials have said Crew Dragon, an acorn-shaped pod that can seat up to seven astronauts, has been in a “very healthy” condition since docking to the space station, where astronauts have been conducting tests and monitoring how the spacecraft performs over time in space.

How to watch the SpaceX return

You can stream the landing via SpaceX and NASA’s websites.

Live coverage will be available throughout the day.