Dame Barbara Windsor is ‘comfortable and happy’ after being moved into a nursing home amid her ongoing battle with dementia, her close friend Christopher Biggins has revealed.

The actor, 71, has been in contact with the 82-year-old EastEnders star’s husband Scott Mitchell, who admitted on Friday he was ‘heartbroken’ by the move which took place following advice from a neurologist.

Biggins told The Mirror: ‘It is such a difficult situation and Scott has behaved impeccably. 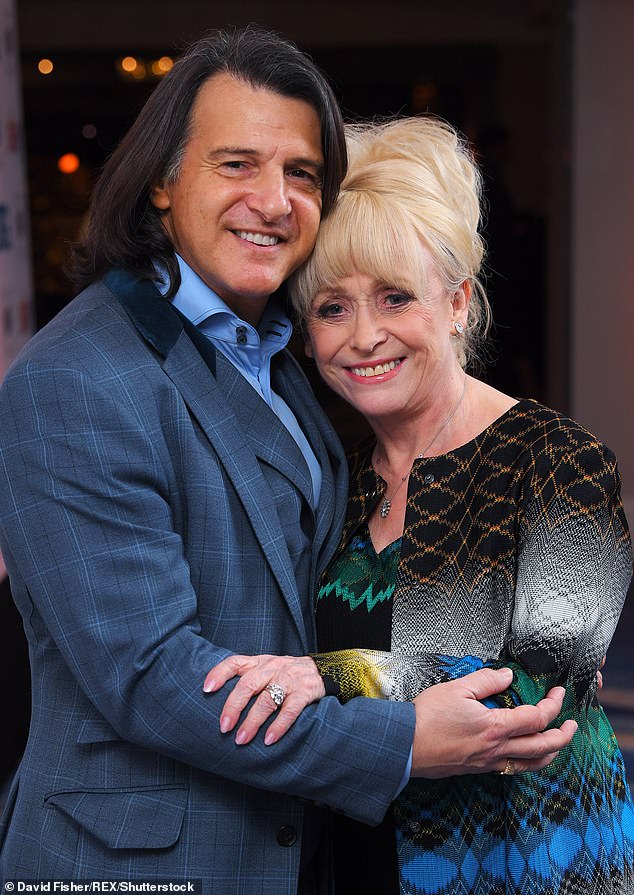 For her health: Dame Barbara Windsor is ‘comfortable and happy’ after being moved into a nursing home amid her ongoing battle with dementia (pictured with husband Scott Mitchell in 2017)

‘I don’t know how he has done it. He deserves the highest accolade that anybody can give anybody, together with all carers.

‘The decision I know wasn’t easy but I think he has made the right decision for everybody concerned. It is just tragic. But you have to look to the future and to Barbara’s comfort. I hear she is very comfortable and happy.’

Biggins also revealed to the publication that he last saw Barbara before lockdown began when he popped round for a cup of tea and that she was still ‘fabulous’.

He said that although she had problems recognising other people, the screen legend still remembered him, before adding that he will go and visit her soon. 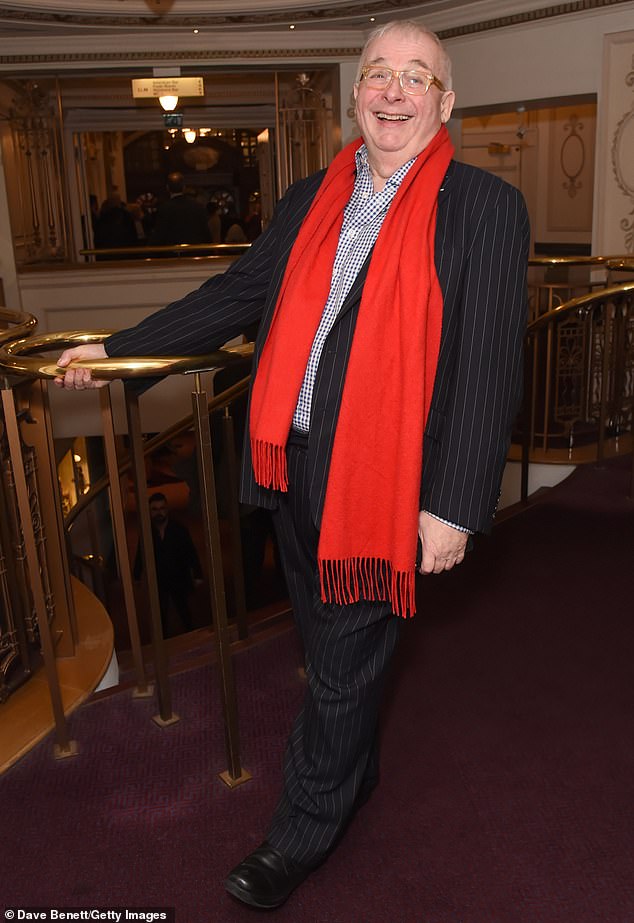 Good friends: Christopher Biggins, 71, has been in contact with the 82-year-old EastEnders star’s husband Scott Mitchell and says he has heard she is coping well in the care home (pictured in February) 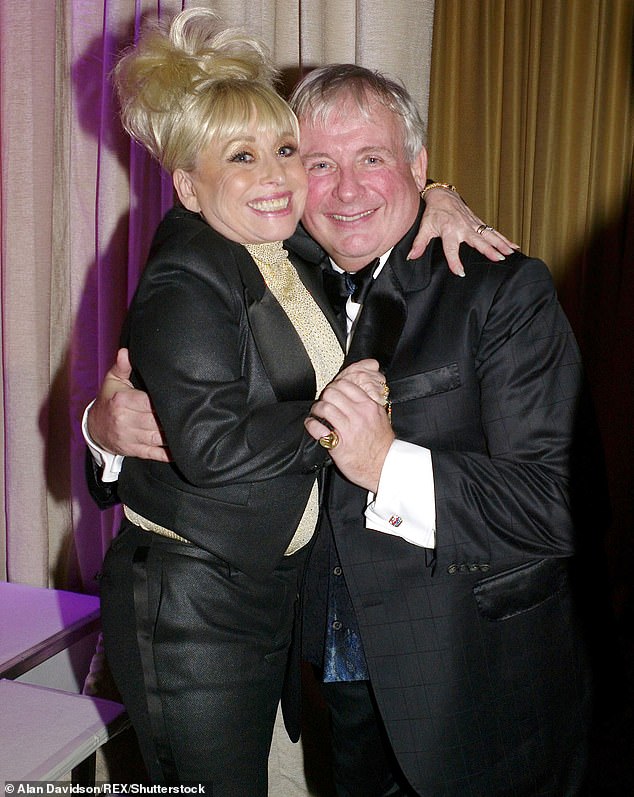 Memories: Biggins also revealed that he last saw Barbara before lockdown began when he popped round for a cup of tea and that she was still ‘fabulous’ (pictured together in 2008)

Speaking to The Sun on Friday about his wife’s move to the care home, Scott, 57, revealed: ‘I feel I’m on an emotional rollercoaster. I walk around, trying to keep busy, then burst in to tears. It feels like a bereavement.

‘It’s always been my biggest fear, that one day I would have to take her somewhere and she’d be thinking, ‘Why would he do this to me?’ That fear has become a reality. It’s something I never wanted.’

Scott fought back tears as he spoke of taking Barbara to the care home, as he confessed the decision left him feeling ‘so raw’. 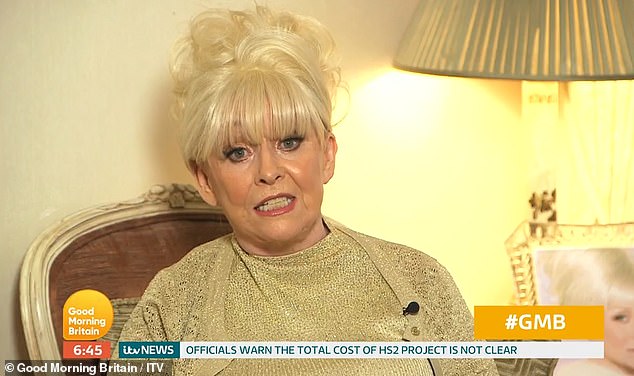 In good hands: Scott revealed that two weeks ago Barbara (pictured in January) moved to a full-time residential care home in London on the advice of her neurologist

He added that Barbara’s neurologist advised him to tell her she would be going away for a few days as her doctors changed her medication.

Saying he felt ‘awful’ when taking her to the care home as she ‘didn’t know’ what was happening, he added: ‘Walking out of the house that day was an incredibly tough thing to do because, the reality is, I doubt if Barbara will ever return.’

Scott then explained that Barbara was taken by staff at the care home in London and put in a wheelchair as she had recently begun to struggle to walk.

The actress remained positive under the circumstances, as her husband said she blew kisses to fellow residents and wanted to hold their hands. 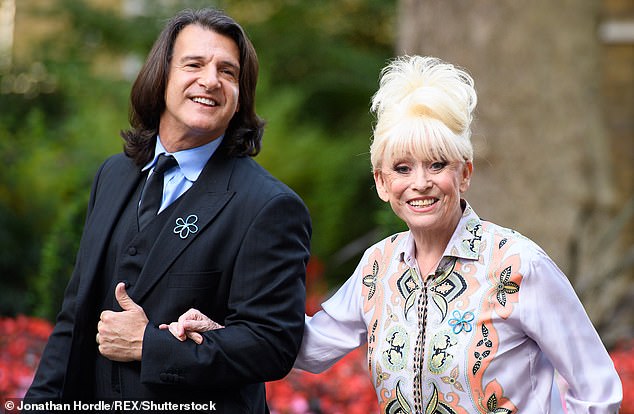 Emotional: As he fought back tears, Scott said: ‘It’s always been my biggest fear, that one day I would have to take her somewhere and she’d be thinking, ‘Why would he do this to me?” (pictured in 2019)

However, due to the coronavirus crisis, she had to self-isolate for two weeks, but Scott said he hoped she could now be allowed to mingle with others and get to know them.

As he emotionally reflected on how Barbara has been while being taken care of by a 24/7 carer, Scott admitted he felt she realised in her lucid moments that the move was not temporary and believed he had ‘let her down’.

Saying she sometimes blamed him for the move, Scott claimed he knew it wasn’t the Barbara he knows who is doing so and felt it was understandable that she would feel that way because ‘who else is she going to blame’.

In response, Scott ensures he tells her he loves her and explains that he is doing what is best for her health. 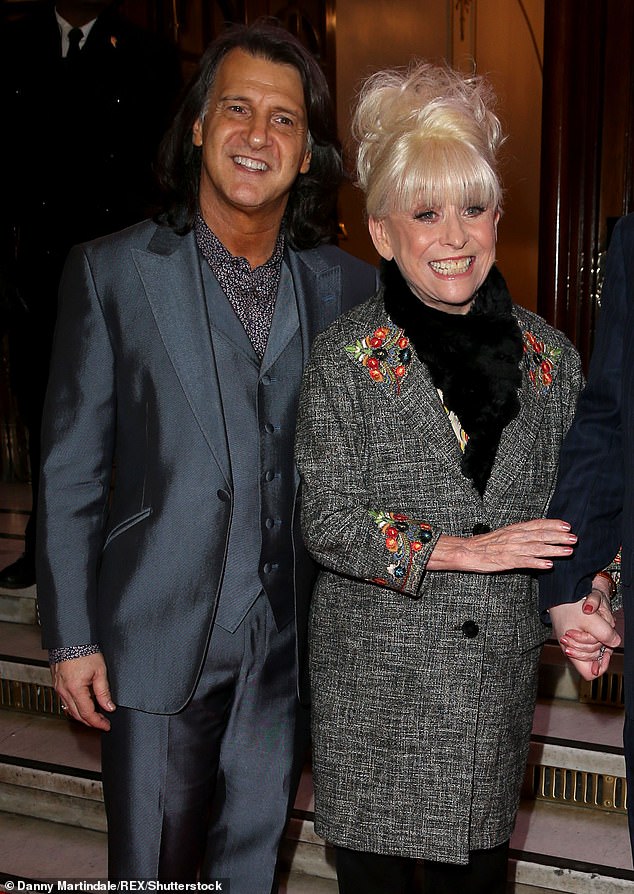 Candid: Saying he felt ‘awful’ when taking her to the care home as she ‘didn’t know’ what was happening, he added: ‘I doubt if Barbara will ever return’ (pictured in 2018)

Scott said he visited the home she is staying in several times, and picked out a spacious room that he filled it with family photos, posters of her work, and other great moments like her receiving her Damehood to make it feel more homely.

On the day he took her to the care home, Scott admitted he felt ‘sick to the pit of [his] stomach’ for leaving her there when they’d spent so much time together during their 27-years together.

In the months prior to taking Barbara to the care home Scott had round-the-clock carers staying in their house, as the star would often wake up in the night and fall due to her ailing health.

Barbara was also said to struggle walking from one room to the other without getting breathless, and needed help getting into the bath which was difficult to do in their home as they didn’t have the facilities to do so. 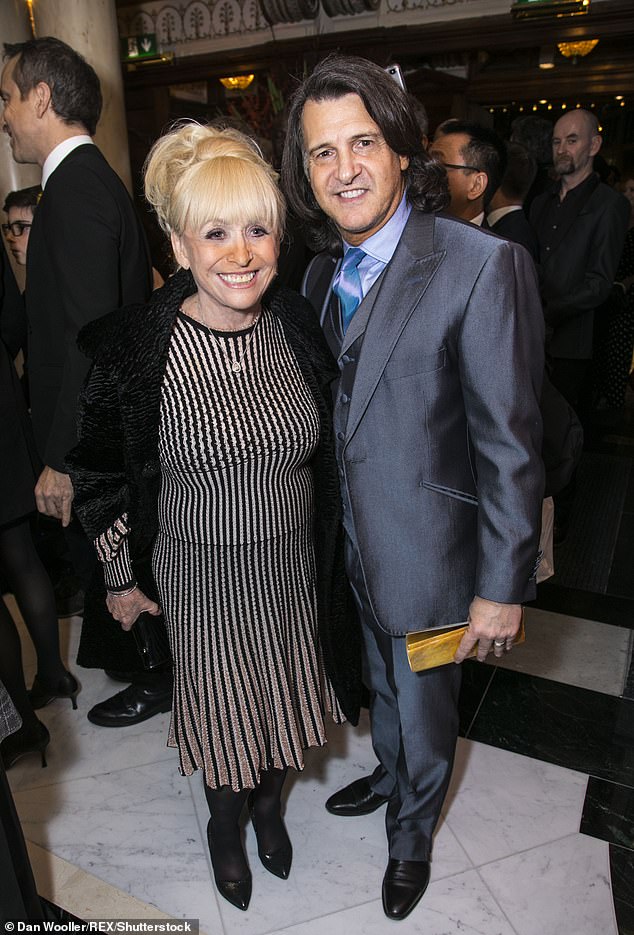 Struggle: Scott said in her more lucid moments the star realised the move wasn’t temporary and would sometimes feel he had ‘let her down’ (pictured in 2017)

Saying he feared she would seriously hurt herself in the process of staying in their home, Scott admitted his concerns overrode his feelings of guilt about taking her to a home, as it was not feasible to let her stay.

Scott added that he hoped Barbara would soon feel a sense of normality in the care home, and while she sometimes ‘gets cross’ with him he knew the decision was for the best and would benefit her in the long-run.

In June, Scott admitted it taking Barbara to a care home was the thing he’s ‘always feared’ and said he couldn’t imagine ever letting her leave their marital home.

Scott, who is her primary carer, revealed at the time that he was told the upsetting development by a specialist after her Alzheimer’s battle ‘worryingly progressed’.

At the time, the theatrical agent added that he had encountered some ‘fairly dark moments’ since the appointment.

While appearing on ITV’s Living with Dementia with the EastEnders star’s former on-screen son Ross Kemp, he admitted sending her to a care home was something he had ‘always feared’

Scott explained: ‘It’s the thing I’ve always feared. He’s basically telling me I need to prepare myself that at some point it may not be sustainable to give her the kind of care she needs at the house.

‘I’ve had some fairly dark moments since he said that because there’s a part of me that knows that most likely is the truth and that’s what needs to happen. There’s another part of me which can’t imagine letting her go.

‘I can’t imagine leaving that lady when she talks to me the way she does and putting her somewhere and her thinking, ‘Why has he done this to me?’ 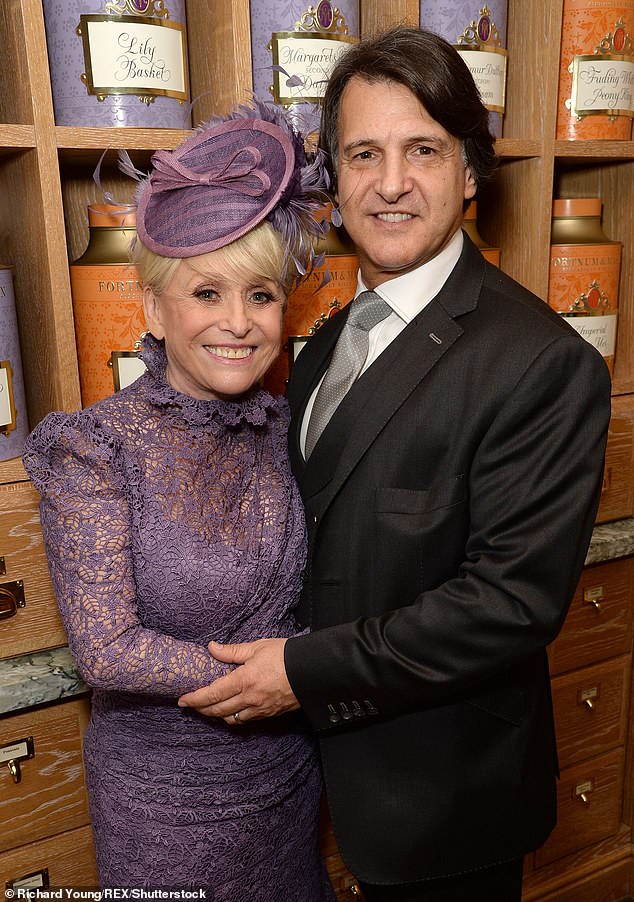 Doting: While he understood her frustrations at being in the care home, Scott said he makes sure to tell her he loves her and explains that it’s best for her health that she stays there (pictured in 2016)

The Carry On actress was diagnosed with the degenerative condition in 2014 and was being cared for round-the-clock by her husband Scott before being taken to a care home.

The actor married EastEnders star Barbara in 2000, and it was previously reported that Scott was struggling with coronavirus lockdown because Barbara couldn’t understand why nobody was visiting her.

Biggins previously told The Sun: ‘She’s a little confused as to what’s going on because no one can visit her. 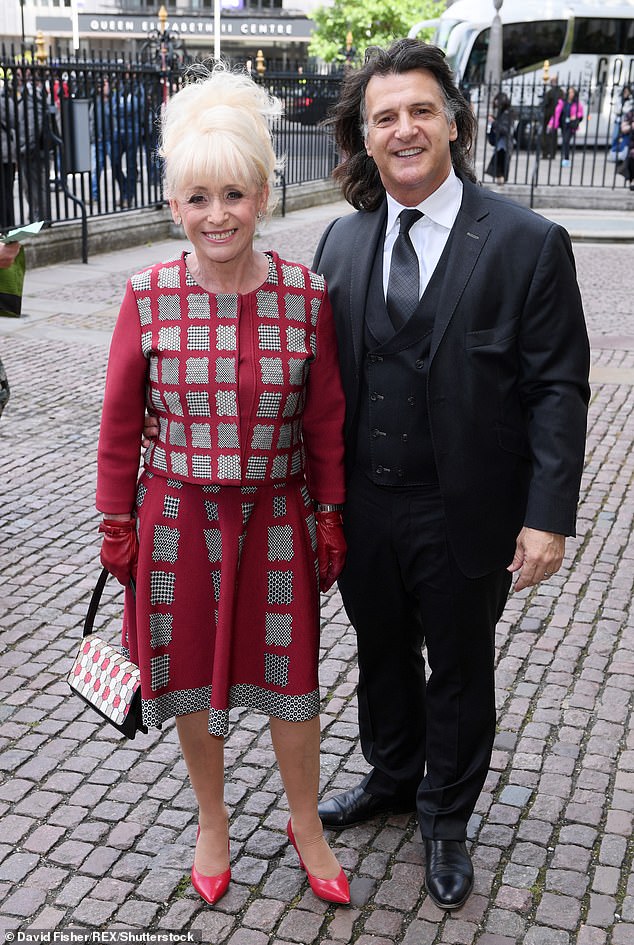 Heartbreaking: In the months prior to taking Barbara to the care home Scott had round-the-clock carers staying in their house, as the star would often hurt herself in the night (pictured in 2017)

‘It’s not because she thinks ”they don’t like me” because her husband Scott explains to her but she just forgets the explanation and she asks all the time.’

Barbara, who is best known for her role as Peggy Mitchell in EastEnders and for starring in nine Carry On films, first revealed she was suffering from the disease, for which there is currently no cure, in May 2018, after being diagnosed in 2014.

Her husband Scott said her condition worsened at the beginning of the year, and that the legendary actress often gets confused as to where she is. 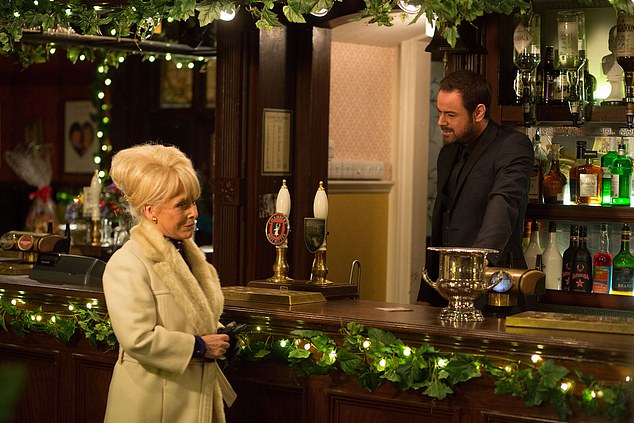 Wish: Scott is hoping Barbara, who is best known for her role as Peggy Mitchell in EastEnders (pictured with co-star Danny Dyer), will soon feel a sense of normality in the care home