This geoengineering idea would feature inflatable bubbles, organized in a circular shape the size of Brazil, which would sit between the Earth and the sun, blocking radiation from hitting our planet.

‘We believe that inflating thin-film spheres directly in space from a homogeneous molten material–such as silicon can provide the variation in thickness that refracts a broader wave spectrum and allows us to avoid the necessity of launching large structural film elements,’ the team share in a press release.

Although Space Bubbles could reduce the amount of radiation hitting Earth, those involved with the work stress the innovation is designed to supplement and not replace current efforts to combat climate change. 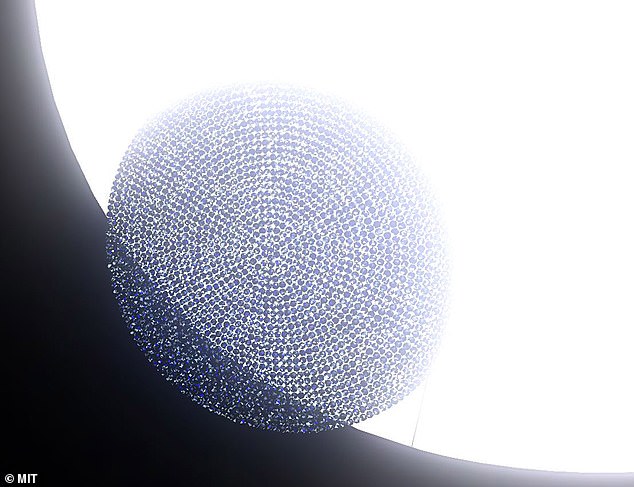 According to the team at MIT’s Senseable City Lab, bubbles have been tested in outer space conditions that they believe could one day be used to deflect solar radiation.

‘Space-based solutions would be safer – for instance, if we deflect 1.8 per cent of incident solar radiation before it hits our planet, we could fully reverse today’s global warming,’ reads the release.

‘As bubbles can be intentionally destroyed by breaking their surface equilibrium,’ the announcement continues, ‘this would make the solar geoengineering solution fully reversible and significantly reduce space debris.’

The giant shield would sit at the Lagrange Point, the area between the Earth and sun and where the James Webb Telescope is, which the team says is the ideal spot to catch radiation before it hits our planet. 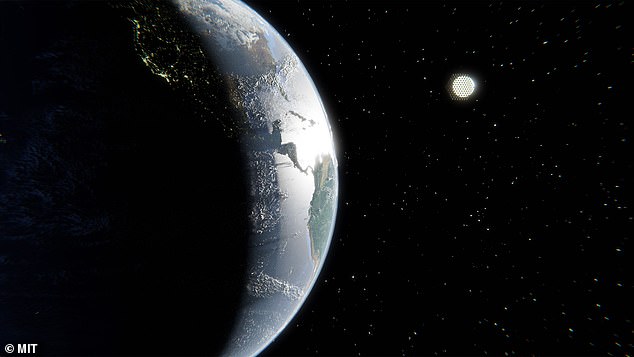 This geoengineering idea would feature inflatable bubbles, organized in a circular shape the size of Brazil, which would sit between the Earth and the sun, blocking radiation from hitting our planet 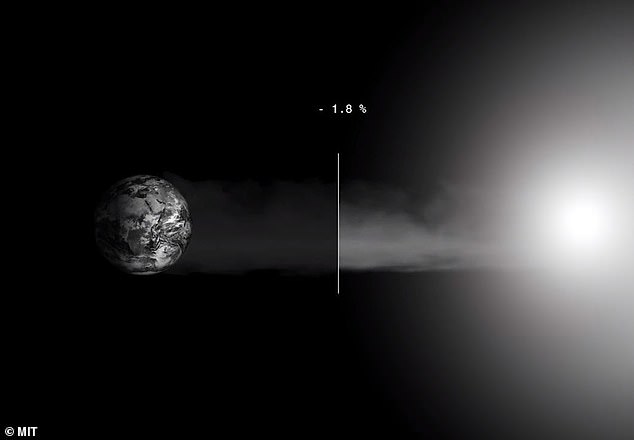 The team notes that if  we deflect 1.8 per cent of incident solar radiation before it hits our planet, we could fully reverse today’s global warming

The team also notes that they have conducted a successful preliminary experiment of their futuristic Space Bubbles.

This was done by inflating a spherical shell in outer space conditions, which included the temperature and pressure found in space.

The Space Bubbles research project builds on ideas by scientist James Early, who first suggested deploying a deflective object at the Lagrangian Point, and astronomer Roger Angel, who proposed the bubble-raft.

Although geoengineering sounds like something out of a science fiction film, it is being used in the real world.

Last year, the United Arab Emirates used geoengineering to create rain in Dubai to beat sweltering temperatures of up to 122 degrees Fahrenheit.

The rain was formed using drone technology that gives clouds an electric shock to ‘cajole them’ into clumping together and producing precipitation.

A report from the National Academies of Sciences, Engineering and Medicine (NASEM), also released in 2021, proposed geoengineering Earth’s oceans to remove carbon dioxide from the atmosphere to combat climate change.

The ideas include adding fertilizer to increase growth of tiny photosynthetic, passing electric currents through the water to boost alkalinity and changing the seawater’s chemistry.

Scott Doney, chair of the committee and professor in environmental sciences at the University of Virginia, who is an author of the report, said in a statement: ‘Ocean carbon dioxide removal strategies are already being discussed by scientists, non-governmental organizations, and entrepreneurs as potential climate response strategies.

‘Right now, society and policymakers do not have the information they need to evaluate the impacts and trade-offs of these climate responses.

‘If we want to make fully informed decisions about the future of our ocean and climate, we need to complete some very critical research in the next decade.’ 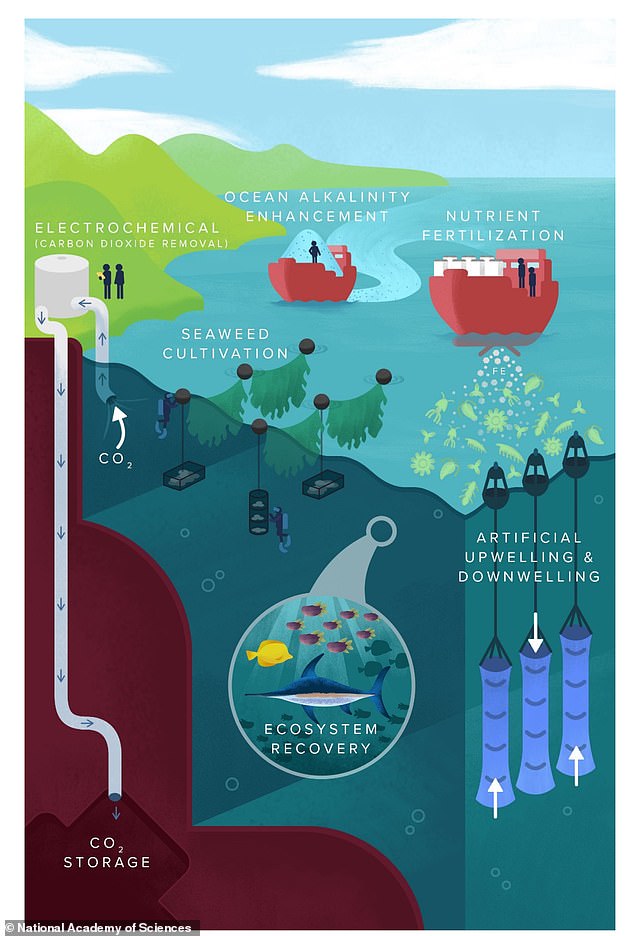 A report from the National Academies of Sciences, Engineering and Medicine (NASEM), also released in 2021, proposed geoengineering Earth’s oceans to remove carbon dioxide from the atmosphere to combat climate change

But a report in 2015 says this type of ‘climate engineering’ – which involves manipulating the natural processes after emissions have been released – is only a quick and cheap fix.

In the long run, such drastic geoengineering measures are ‘irrational and irresponsible’ and could ultimately damage the planet, a US panel of scientists has said.

‘There is no substitute for dramatic reductions in greenhouse gas emissions to mitigate the negative consequences of climate change,’ said the National Research Council in a two-part report on proposed climate-intervention techniques.

‘If society ultimately decides to intervene in Earth’s climate, any actions should be informed by a far more substantive body of scientific research, including ethical and social dimensions, than is presently available.’

The Washington-based panel urged against ‘albedo-modification technologies, which aim to increase the ability of Earth or clouds to reflect incoming sunlight,’ saying they ‘pose considerable risks and should not be deployed at this time.’

Such techniques would only temporarily mask the warming effect caused by high CO2 concentrations, and present serious known and possible unknown environmental, social, and political risks, said the report.