Britain’s wildlife is proving to be a big international hit, after a YouTube channel was set up to stream live footage from the animals’ nests.

Yorkshire-based wildlife artist Robert Fuller has installed a network of secret webcams inside the nests of barn owls, tawny owls, kestrels and stoats.

These cameras are streaming video and audio to Fuller’s YouTube channel 24/7, providing the public with a unique insight into the daily lives of these woodland animals.

One bar and bowling alley in the Netherlands has even swapped its sports coverage for streams from the live ‘bird cams’. 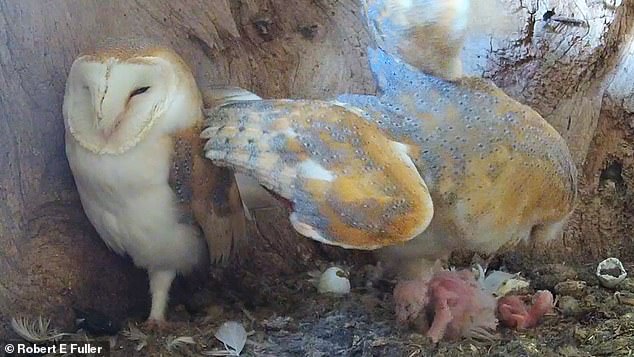 Britain’s wildlife is proving to be a big international hit, after a YouTube channel was set up to stream live footage from the animals’ nests 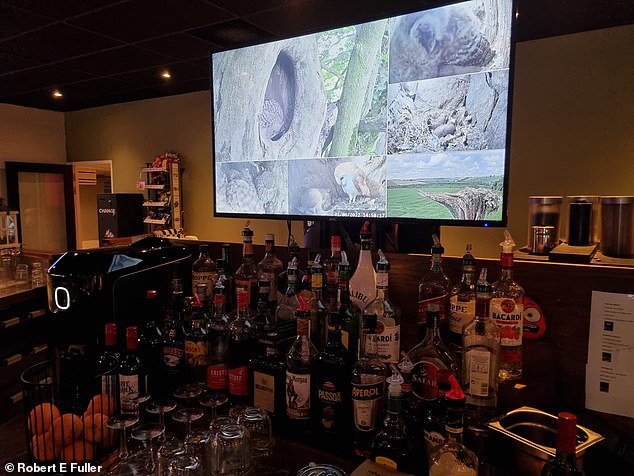 The big screen at Bowlingcentrum Merwehal in Dordrecht, Netherlands, showed live feeds of the barn owls

With heart-shaped face, buff back and wings and pure white underparts, the barn owl is a distinctive and much-loved countryside bird.

Widely distributed across the UK, and indeed the world, this bird has suffered declines through the 20th century and is thought to have been adversely affected by organochlorine pesticides such as DDT in the 1950s and 60s.

Barn owl numbers are thought to have increased between 1995-2008, although nocturnal birds are poorly monitored.

‘I have more than 100 hidden cameras positioned in my garden and the countryside surrounding my art gallery so that at any one time I can watch the wildlife that visits,’ Fuller says on his website.

One of the YouTube streams shows feeds from multiple cameras in Ash Wood, a woodland on the Yorkshire Wolds, while a second video streams live from Fotherdale Farm near Thixendale, where Fuller has an art gallery.

The Fotherdale video shows an astonishing barn owl family in the stump of an elm tree, with young that are only a few weeks old.

There’s also streams from feeding posts, which show a variety of birds coming and going, and the inside of a stoat enclosure.

The Ash Wood video, meanwhile, shows the inside of tawny owl and kestrel nests, and has even showed deer and badgers drinking at a pond.

The streams have gone viral, with up to 20,000 people watching the nests each day from countries including South Korea, the Philippines and Mexico.

Families have also sent Fuller photos of them tuning into the coverage from locations such as the Eiffel Tower and the Statue of Liberty.

Staff at the Bowlingcentrum Merwehal in Dordrecht near Rotterdam switched the bar’s big screen from showing sport to Fuller’s streams.

Punters at the bar ‘sit around for hours just gazing at the screens’ after their bowling games, staff member Niels van Dalen told the Telegraph.

Fuller conceived the project during the Covid lockdown, when the opportunity to get out and see wildlife was limited.

‘We started pushing the live stream in lockdown because people were getting into the green spaces and it just went crazy straight away,’ he said. 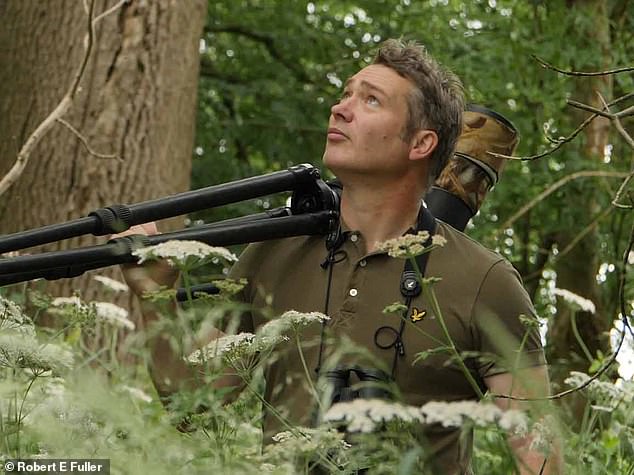 ‘For this to be on a big screen in a bar, we love it. That’s the amazing part of it all – that we’ve built this big community of people interacting with people over nature. All religions, all countries and no barriers, really.

‘It brings such joy. It’s so peaceful and comforting, compared to something like sports where everyone is yelling. Everyone is just enjoying the wildlife.’

It features footage of two adults and five chicks, which are expected to fledge towards the end of June.

Barn owls are a nocturnal bird distributed across much of the UK, though their numbers have been hit by the use of organochlorine pesticides in the 1950s and 1960s.

What they eat:  Mice, voles, shrews and some larger mammals and small birds.

The tawny owl is about the size of a woodpigeon and are mainly reddishh brown. They are thought to breed with the same partner and do not roam widely outside their territory.

What they eat: Small mammals and rodents, small birds, frogs, insects and worms.