A international mining company has announced it will debut the world’s largest electric vehicle at one of its platinum mines in South Africa.

Called the Fuel Cell Electric Vehicle, it will weigh around 290 tons and is more than six times heavier than the second biggest electric vehicle in the world, a 45-ton ‘eDumper’ used to move lime and marlstone around an unrelated mining facility in Switzerland.

The Fuel Cell Electric Vehicle was designed with a hybrid engine design that uses both a lithium-ion battery and hydrogen fuel cells, which replace the conventional diesel engine vehicles typically used at mines. 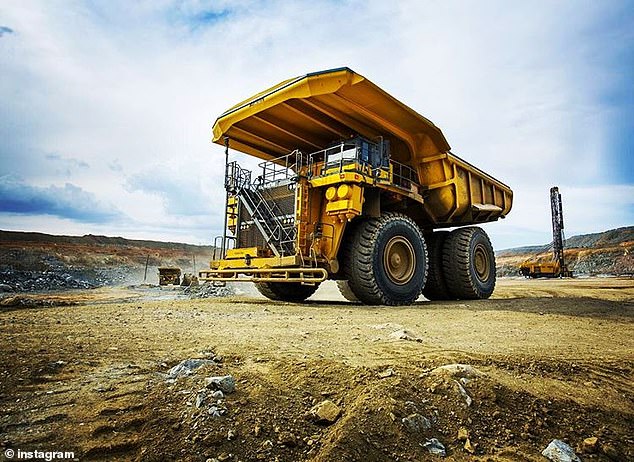 The Fuel Cell Electric Vehicle (pictured above) is the world’s largest electric vehicle, set to be put into regular use at the Mogalakwena platinum mine in South Africa later this year

The truck will have combined energy stores of 1,000 Kilowatt-hours, and the only waste byproduct created by the engine is water, which is only produced when it’s running on hydrogen fuel.

The truck will also have the capacity to recapture small amounts of kinetic energy from its braking system to charge its lithium-ion battery, according to a report in Popular Mechanics.

The truck will be put to use later this year at the Mogalakwena mine, one of South Africa’s largest platinum reserves where more than 310,000 ounces of platinum are extracted every year.

The mine is run by Anglo American, an international mining conglomerate that produces 40 percent of the world’s platinum, and also mines diamonds, copper, nickel, iron ore and coal.

Anglo American has publicly promised to reduce its global greenhouse emissions 30 percent by 2030 and believes increasing the company’s use of electric vehicles could help it reach that goal.

HOW DO HYDROGEN FUEL CELLS WORK?

Hydrogen fuel cells create electricity to power a battery and motor by mixing hydrogen and oxygen in specially treated plates, which are combined to form the fuel cell stack.

Fuel cell stacks and batteries have allowed engineers to significantly shrink these components to even fit neatly inside a family car, although they are also commonly used to fuel buses and other larger vehicles.

Oxygen is collected from the air through intakes, usually in the grille, and hydrogen is stored in aluminium-lined fuel tanks, which automatically seal in an accident to prevent leaks.

These ingredients are fused, releasing usable electricity and water as byproducts and making the technology one of the quietest and most environmentally friendly available.

Reducing the amount of platinum used in the stack has made fuel cells less expensive, but the use of the rare metal has restricted the spread of their use.

Recent research has suggested hydrogen fuel cell cars could one day challenge electric cars in the race for pollution-free roads, however – but only if more stations are built to fuel them.

Fuel cell cars can be refueled as quickly as gasoline-powered cars and can also travel further between fill-ups.

Fuelling stations cost up to $2 million to build, so companies have been reluctant to build them unless more fuel cell cars are on the road.

The U.S. Department of Energy lists just 34 public hydrogen fuelling stations in the country; all but three are in California.

According to Information Trends, there were 6,475 FCV’s worldwide at the end of 2017.

More than half were registered in California, which puts the U.S. (53 per cent) at the forefront for FCV adoption.

Japan takes second place with 38 per cent, while Europe is at nine per cent.

For the Fuel Cell Electric Vehicle, the company partnered with Williams Advanced Engineering, a London-based company that does work on a variety of energy efficiency and automotive projects.

Williams also designs batteries for electric race cars that compete in the FIA Extreme E racing circuit, and used that technology as the starting point for the Fuel Cell Electric Vehicle.

‘We are delighted to be involved in this innovative and exciting project which showcases the scalability of battery technology from automotive and motorsport to “heavy duty” industrial applications,’ Williams’s Craig Wilson said in a prepared statement.

‘Operating within a harsh environment is something we are familiar with as sole battery supplier for the Extreme E program and we remain committed to supporting long-term sustainability projects.’