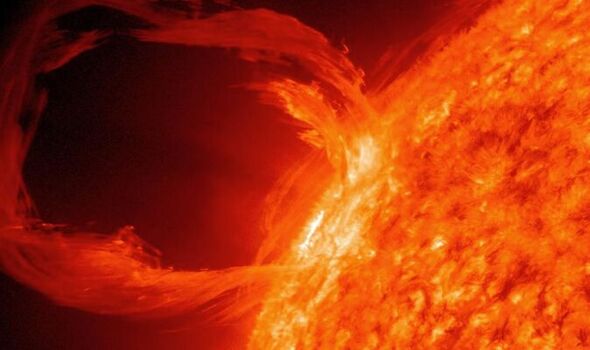 Just minutes later, the expert followed up with a second tweet, which read: “Confirmed! Magenta and gold aurora grace the skies over Pierre, South Dakota, USA tonight as this ongoing #solarstorm builds.”

On Saturday, Dr Skov said there was a “snake-like filament launched as a big #solarstorm while in the Earth-strike zone”.

She added that NASA had predicted impact for early today.

It had also been predicted that amateur and GPS users would suffer from “signal disruptions on Earth’s nightside”.

Dr Skov tweeted on Saturday: “Direct Hit! A snake-like filament launched as a big #solarstorm while in the Earth-strike zone.

“Strong aurora shows possible with this one, deep into mid-latitudes.