Scientists identify the cells in human lungs, noses and intestines that are most vulnerable to the coronavirus for the first time in a vital step in the search for a treatment

Scientists have identified the particular cells in human lungs, nasal passages and intestines that are the most vulnerable to the new coronavirus.

Experts used a database of which genes are turned on by which cells to identify the cell types which produce the two proteins COVID-19 uses to enter and infect cells.

The team also found that the coronavirus has evolved to exploit interferon, a protein which normally helps the body to fight off viral infections.

The findings may help to guide the development of new drug treatments — or the identification of existing drugs that could be repurposed — to fight COVID-19. 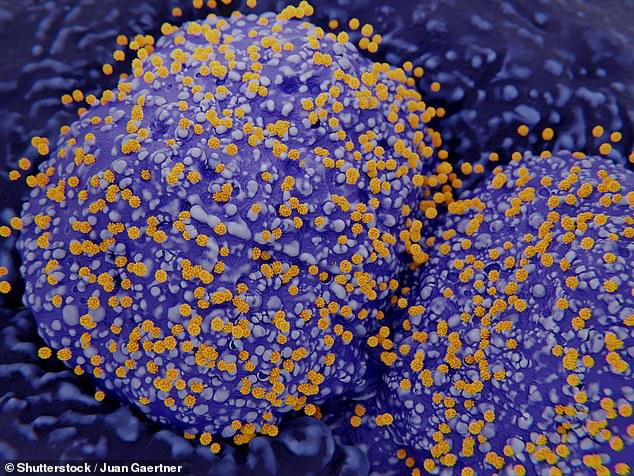 Scientists have identified the particular cells in human lungs, nasal passages and intestines that are the most vulnerable to the new coronavirus. Pictured, an artist’s impression of coronaviruses budding out of infected type II pneumocyte cells in the human lungs

Shortly after the COVID-19 outbreak began, experts discovered that the virus’ ‘spike’ protein binds to receptor on human cells dubbed ACE2 — short for ‘angiotensin-converting enzyme 2’ — that is thought to protect the lungs from damage.

A second human protein — an enzyme called TMPRSS2 — then helps to activate the spike protein, allowing the coronavirus to gain entry to a target cell if both these binding and activation proteins are present.

‘As soon as we realised that the role of these proteins had been biochemically confirmed, we started looking to see where those genes were in our existing datasets,’ said Jose Ordovas-Montanes of the Boston Children’s Hospital.

‘We were really in a good position to start to investigate which are the cells that this virus might actually target,’ the immunologist added.

The researchers had assembled a database of the results of existing studies — some undertaken by the team themselves — that used so-called ‘single-cell RNA sequencing technology’ to determine which genes are turned on by which cells.

These studies — many of which are part of the Human Cell Atlas project — involved the large-scale analysis of tens of thousands of human, primate and mouse cells.

‘Because we have this incredible repository of information, we were able to begin to look at what would be likely target cells for infection,’ said paper author and chemist Alex Shalek of the Massachussets Institute of Technology.

‘Even though these datasets weren’t designed specifically to study COVID-19, it’s hopefully given us a jump start on identifying some of the things that might be relevant there.’

In their study, the researchers focused on the hundreds of catalogued cell types found in our lungs, nasal passages and intestine — all areas of body known to be infected by the novel coronavirus — in comparison to cells from unaffected organs. 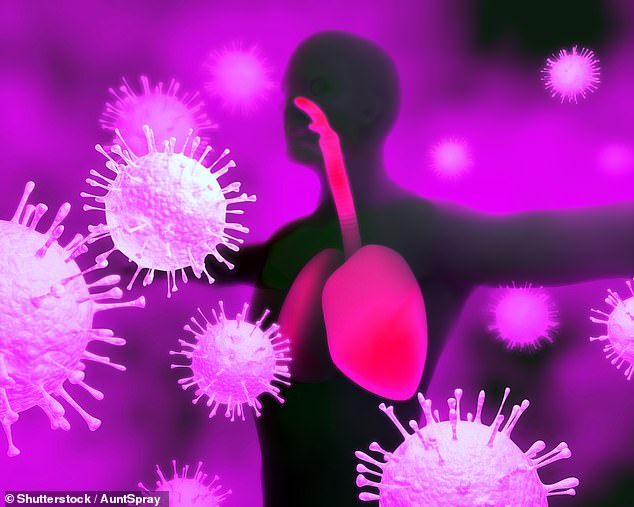 In their study, the researchers focused on the hundreds of catalogued cell types found in our lungs and nasal passages (pictured) as well as the intestine — all areas of body known to be infected by the novel coronavirus — in comparison to cells from unaffected organs

The team found that so-called goblet secretory cells in the nasal passages — which produce mucus — have both of the proteins that COVID-19 needs to infect a cell.

In the lungs, meanwhile, cells called type II pneumocytes that line and support the air sacs of the lungs are similarly susceptible, the researchers discovered.

Finally, absorptive enterocytes — cells in the intestines responsible for the absorption of some nutrients — expressed the RNA for the two proteins more than any other type of intestinal cell.

‘This may not be the full story, but it definitely paints a much more precise picture than where the field stood before,’ Dr Ordovas-Montanes says.

‘Now we can say with some level of confidence that these receptors are expressed on these specific cells in these tissues.’ 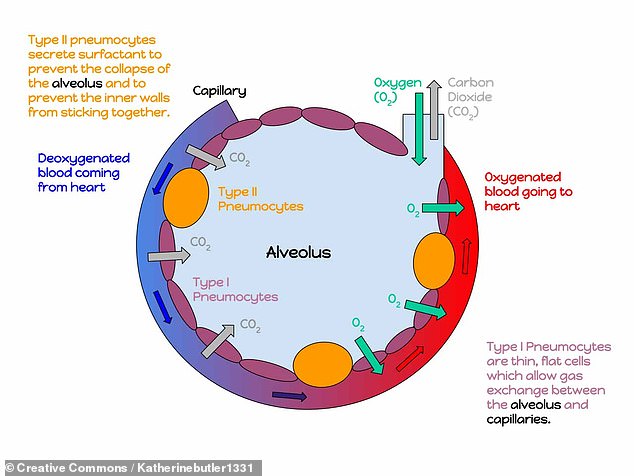 In the lungs, meanwhile, cells called type II pneumocytes — illustrated here in yellow — that line and support the air sacs of the lungs are similarly susceptible, the researchers discovered

The researchers’ data also revealed a correlation between the expression of the ACE2 gene with the activation of genes that are turned on by interferon — a protein which the body produces in reaction a viral infection.

When the researchers went on to conduct experiments in which they treated the cells of the human airway with interferon, they found that such turned on the ACE2 gene as well — the first time this connection has been established.

Interferon normally helps the body to fight off infections by both interfering with virus’ ability to replicate, helping to active the body’s immune cells and turning on specific genes that help cells to combat infection.

The team’s findings indicate that coronaviruses may have evolved to subvert part of their host’s natural defences, turning them to their advantage.

‘This isn’t the only example of that,’ Dr Ordovas-Montanes noted.

‘There are other examples of coronaviruses and other viruses that actually target interferon-stimulated genes as ways of getting into cells. In a way, it’s the most reliable response of the host.’

Given how interferon is usually beneficial in fighting off viruses, it is often given to patients in the treatments of infections like hepatitis B and C — however, the team’s findings suggest that it might play a more complicated role in the case of COVID-19.

It’s hard to make any broad conclusions about the role of interferon against this virus. The only way we’ll begin to understand that is through carefully controlled clinical trials,’ Professor Shalek cautioned.

‘What we are trying to do is put information out there, because there are so many rapid clinical responses that people are making. We’re trying to make them aware of things that might be relevant.’

With their initial study complete, Professor Shalek and colleagues are now looking to profile tissue models that include the vulnerable cells they identified.

These models could then be used to test prospective antiviral drug treatments and predict how they might work against an infection with SARS-CoV-2.

‘Our goal is to get information out to the community and to share data as soon as is humanly possible, so that we can help accelerate ongoing efforts in the scientific and medical communities,’ said Professor Shalek.

‘There’s been an incredible outpouring of information from the scientific community with a number of different parties interested in contributing to the battle against COVID-19 in any way possible.’

‘It’s been incredible to see a large number of labs from around the world come together to try and collaboratively tackle this.’

The full findings of the study were published in the journal Cell.