Hiding in plain sight: Scientists discover 19 interstellar asteroids between Jupiter and Neptune that may have been orbiting the Sun for more than 4.5 billion years

Nineteen asteroids that once belonged to a distant star system have been found orbiting the sun between Jupiter and Neptune.

They have been circling the sun for more than 4.5billion years, since the very inception of the solar system.

Astronomers believe the space rocks were ripped from their original location as the universe expanded and the sun grew rapidly, creating its own gravitational pull.

The enormous force of the burgeoning star sucked the rocks into the formative solar system and they have remained here ever since, astronomers believe. 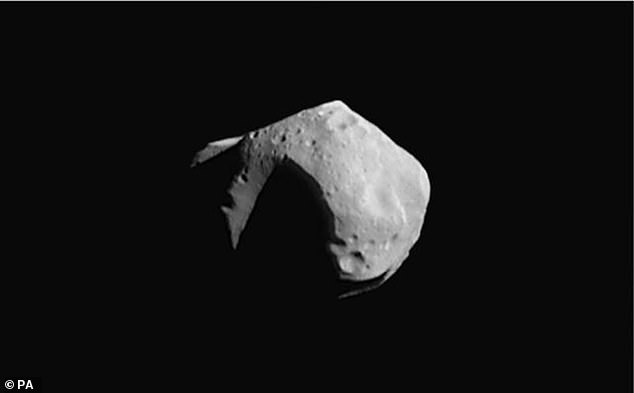 Nineteen asteroids that once belonged to a distant star stem have been found orbiting the sun between Jupiter and Neptune They have been circling the sun for more than 4.5billion years, since the very inception of the solar system (file photo)

The findings come more than two years after astronomers spotted the first interstellar visitor, the asteroid known as ‘Oumuamua.

The asteroids belong to a group of objects called Centaurs.

Fathi Namouni, of Observatoire de la Cote d’Azur in France and lead author of the study, said: ‘The close proximity of the stars meant that they felt each other’s gravity much more strongly in those early days than they do today.

‘This enabled asteroids to be pulled from one star system to another.’

They revealed the asteroids were orbiting the Sun on a plane perpendicular to planetary motion at that time.

At the time, matter was scattered around the infantile sun and gravity was turning the detritus into rocky planets, what would eventually take the form of Mercury, Venus, Earth and Mars.

However, these interstellar asteroids were far enough away from the sun that the avoiding this disc of debris and therefore survived the tumultuous early stages of the solar system.

Dr Morais said: ‘The discovery of a whole population of asteroids of interstellar origin is an important step in understanding the physical and chemical similarities and differences between Solar System-born and interstellar asteroids.

‘This population will give us clues about the Sun’s early birth cluster, how interstellar asteroid capture occurred, and the role that interstellar matter had in chemically enriching the Solar System and shaping its evolution.’

The origin of Centaurs has been a mystery to astronomers since the first member of the group, called Chiron, was recognised in 1977.

Some believe they may have spent some time in the Kuiper Belt, a circumstellar disc in the outer Solar System, before moving inwards.

The new work is published in the journal Monthly Notices of the Royal Astronomical Society.

WHAT ARE THE DIFFERENT TYPES OF SPACE ROCKS?