Materials scientists have created biodegradable flip flops made from algae to help reduce the amount of harmful plastic waste entering our oceans.

The experts created polyurethane foams, made from algae oil, to meet commercial specifications for flip-flops and other footwear usually made from flexible plastic.

Cheap and affordable flip flops, the world’s most popular shoe, are commonly used for short periods and discarded after a few uses due to flimsy materials.

Once discarded, flip flops take hundreds of years to decompose and can enter the oceans, killing marine life and contaminating water supplies.

But this commercial-grade foam degrades in compost and soil after 16 weeks, meaning it would break down if it drifted into the ocean.

The foam meets commercial requirements for the foot-bed of flip-flops as well as the cushioning midsole section of shoes. 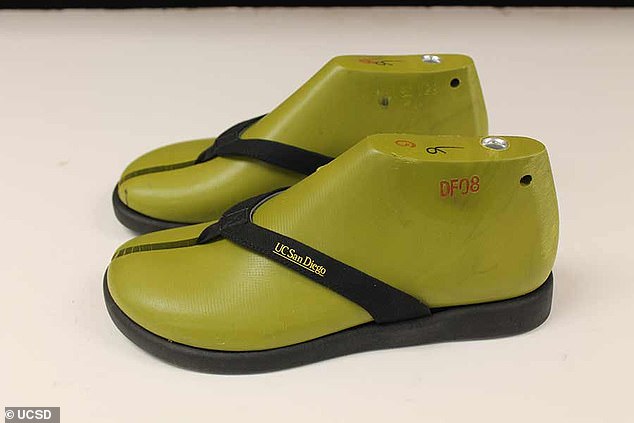 Researchers formulated polyurethane foams, made from algae oil, to meet commercial specifications for midsole shoes and the foot-bed of flip-flops

‘The life of material should be proportional to the life of the product – we don’t need material that sits around for 500 years on a product that you will only use for a year or two,’ said Stephen Mayfield at the University of California San Diego (UCSD).

Polyurethane is a leading member of the wide-ranging and highly diverse family of polymers or plastics.

Polyurethanes exist in a variety of forms, including flexible foams, rigid foams, chemical-resistant coatings, adhesives and sealants, and elastomers.

Polyurethane can be a solid or can have an open cellular structure, in which case it is called foam, which can be flexible or rigid.

Additives are necessary to produce high-quality polyurethane foam products, depending on the application the foam will be used for.

‘We have commercial-quality foams that biodegrade in the natural environment.

‘After hundreds of formulations, we finally achieved one that met commercial specifications.

Over the last 50 years, humans have generated more than 6 billion metric tons of plastic waste.

On some islands in the Indian ocean, it is estimated that flip flops and other simple shoes make up around 25 per cent of the ocean plastic trash, Mayfield told MailOnline.

UCSD is therefore collaborating with US startup company Algenesis Materials to develop polyurethane products that can biodegrade in the natural environment.

The researchers formulated polyurethane foams, made from algae oil, to meet commercial specifications for shoe parts.

Oils extracted from algae, which has fast growth rates under photosynthetic conditions, ‘possess unique metabolic pathways’ for producing hydrocarbons that can be converted into plastic-making chemicals.

More than half of the new foam is made up of bio content – living or dead organisms.

‘These foams are 52 per cent biocontent – eventually we’ll get to 100 per cent,’ Mayfield said.

‘Even though isocyanate comes from petroleum it is still biodegradable and eaten by microorganisms once degraded into molecules.’ 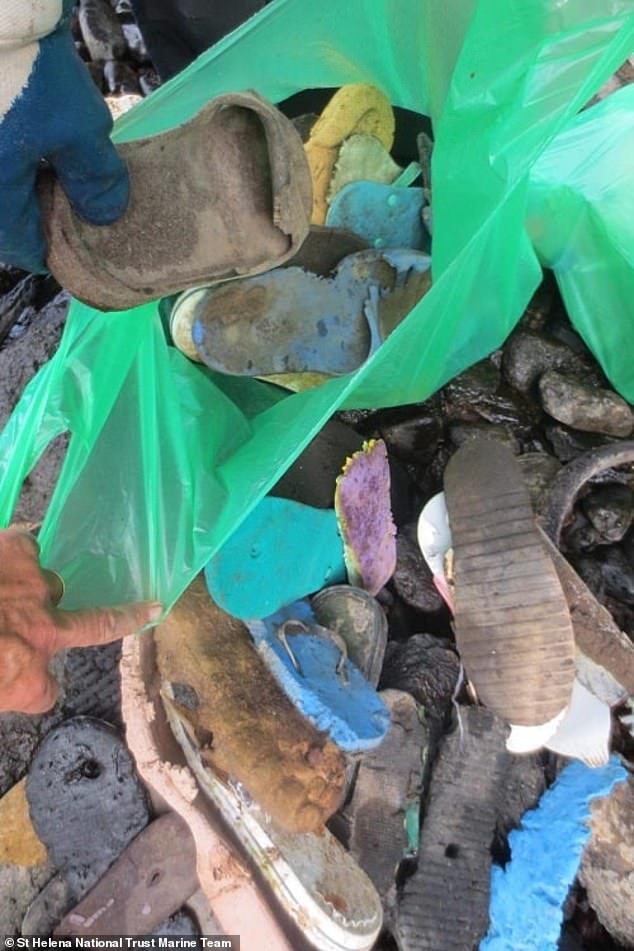 Researchers have used the oil to make the footbed of the sandal, the soft part under the foot, and the outsole, the harder part that faces the ground.

The strap is also made from biodegradable material, although the team have not yet tried making it from their own polyurethane foam.

The foam is also harmless to marine life, which often swallow plastic detritus after mistaking it for prey, having fatal consequences.

‘Some organisms can live on just our foam and some salts, so our foam is actually food for microorganisms,’ Mayfield said.

The team didn’t just want to make the flip flops out of algae oil, but to degrade them as well.

Cubes of the foam were therefore incubated in two separate environments – compost and soil, to expose them to microorganisms that may be found in natural settings.

Cubes were weighed and compression-tested prior to being incubated in containers filled with either compost or soil material, and placed at 53°F (30°C) under continuous high humidity.

A set of control cubes were also tested under the same incubation conditions in order to confirm that physical degradation occurred as a result of exposure to the compost or soil and not simply to the high humidity. 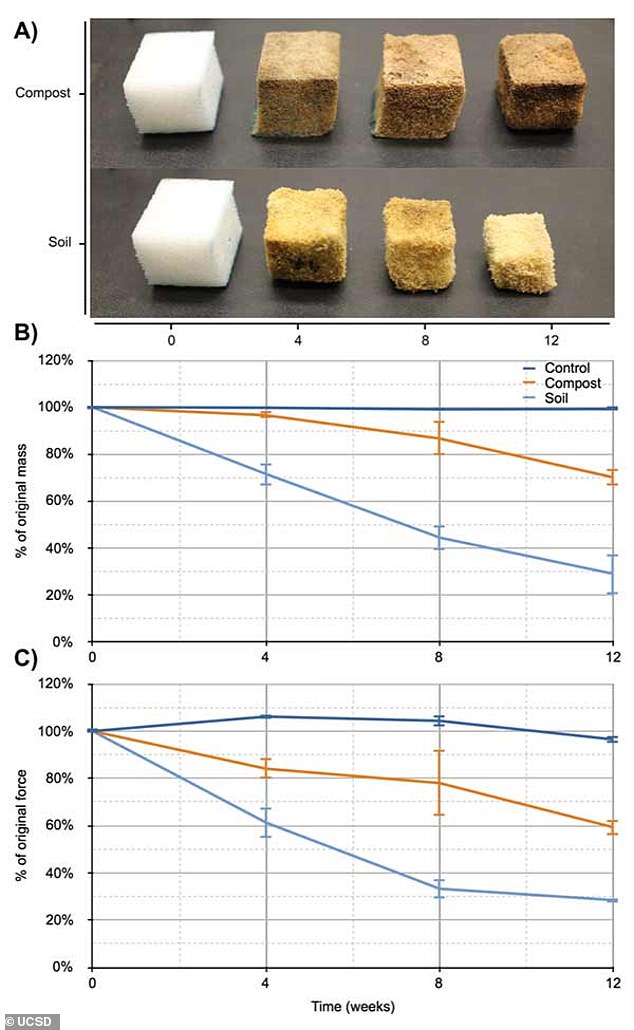 Biodegradation of PU cubes over 12 weeks. Degradation was analysed through A) change in appearance, B) cube mass, and C) maximum force at 50% compression force deflection

The compost and soil-immersed cubes’ mass and resistance to force degraded after just 12 weeks before decomposing at 16 weeks, they found.

During the decomposition period, to account for any toxicity, the scientists measured every molecule shed from the biodegradable materials and identified the organisms that degraded the foams.

Bacteria and fungi depolymerised the polyurethane product, meaning they broke down polymeric bonds that give the foam its solid structure.

Bacteria were able to survive using polyurethane as a sole carbon source.

The depolymerised products could then be isolated and used again to synthesise the resulting polyurethane liquid back into a solid, effectively recycling it. 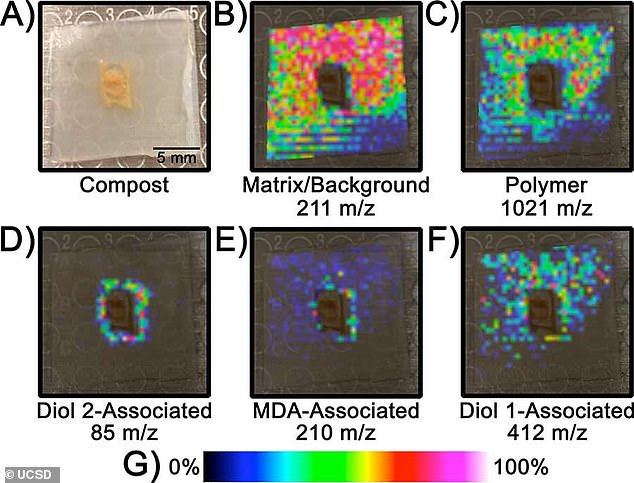 Bacteria and fungi associated with the degrading polyurethane foam were identified. Compost-derived organisms growing on agar plates covered with a thin film of the polyurethane product 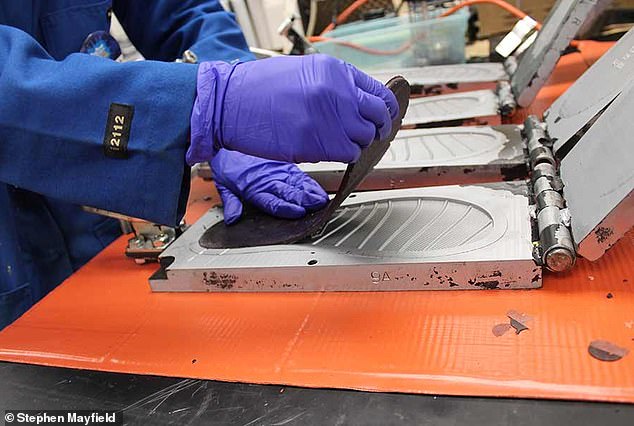 Foot-bed of flip-flops being pulled from a mold. Recyclability of commercial products is the next step in a mission to address the world’s plastic waste management problems

If current production and waste management trends continue, roughly 96 billion tons of plastic waste will be in landfills or in the natural environment by 2050, according to a previous study.

This environmentally unfriendly practice began about 60 years ago with the development of plastics.

‘If you could turn back the clock and re-envision how you could make the petroleum polymer industry, would you do it the same today that we did it years ago?’ said study co-author Skip Pomeroy at UCSD.

‘There’s a bunch of plastic floating in every ocean on this planet that suggests we shouldn’t have done it that way.’

The materials scientists are now working on commercially producing the foams in an economical way.

The study has been published in Bioresource Technology Reports.