The giant penguin as big as a CHILD: Fossil discovered by school children reveals 4ft 7in bird that roamed New Zealand 34 million years ago

A giant, child-sized penguin whose fossilised remains were first discovered by New Zealand school children has been revealed to be a previously-unknown species.

At the time K. waewaeroa was alive, during what geologists call the Oligocene epoch, much of the Waikato region of New Zealand would have been under water.

Researchers from Massey University and Connecticut’s Bruce Museum took 3D scans of the fossil and compared it with other birds to confirm it was a novel species.

They also used the scans to 3D print a replica of the K. waewaeroa specimen for the members of the Hamilton Junior Naturalists Club who found the real fossil.

The club had generously donated the authentic specimen to the Waikato Museum (Te Whare Taonga o Waikato) back in 2017.

Penguins have a fossil record going back almost to the age of the dinosaurs — with most having been unearthed in New Zealand, specifically Canterbury and Otago.

A giant, human-sized penguin whose fossilised remains were first discovered by New Zealand school children has been revealed to be a previously-unknown species. Pictured: an artist’s impression of how the 4′ 7″ Kairuku waewaeroa might have looked during life 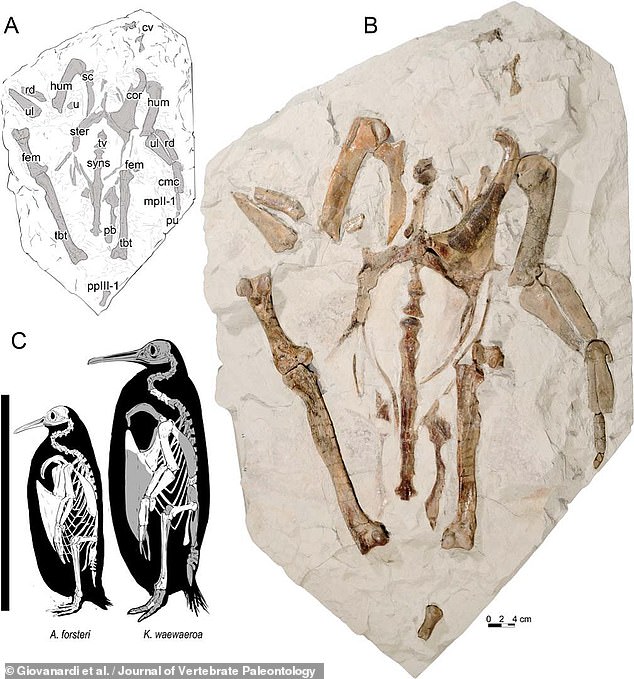 At the time K. waewaeroa was alive, during what geologists call the Oligocene epoch, much of the Waikato region of New Zealand would have been under water. Pictured: the fossilised remains of K. waewaeroa (right, with an illustration top left) and a size comparison with a modern-day emperor penguin, Aptenodytes forsteri (bottom right)

The study was conducted by ornithologist Daniel Thomas of Massey University, in Auckland, and colleagues.

‘The penguin is similar to the Kairuku giant penguins first described from Otago but has much longer legs, which the researchers used to name the penguin waewaeroa — Te reo Māori for “long legs”,’ explained Dr Thomas.

‘These longer legs would have made the penguin much taller than other Kairuku while it was walking on land — perhaps around 1.4 metres [4 feet 7 inches] tall, and may have influenced how fast it could swim or how deep it could dive.

‘It’s been a real privilege to contribute to the story of this incredible penguin. We know how important this fossil is to so many people.’

‘Kairuku waewaeroa is emblematic for so many reasons. The fossil penguin reminds us that we share Zealandia with incredible animal lineages that reach deep into time, and this sharing gives us an important guardianship role.’

(Zealandia is the name given to the lost continent beneath present-day New Zealand that sank into the sea some 23 million years ago.)

Dr Thomas continued: ‘The way the fossil penguin was discovered — by children out discovering nature — reminds us of the importance of encouraging future generations to become kaitiaki [guardians].’

Hamilton Junior Naturalist Club president Mike Safey said that the children who helped discover the K. waewaeroa fossil back in 2006 will remember the experience for the rest of their lives.

‘It was a rare privilege for the kids in our club to have the opportunity to discover and rescue this enormous fossil penguin,’ he added.

‘We always encourage young people to explore and enjoy the great outdoors. There’s plenty of cool stuff out there just waiting to be discovered.’ 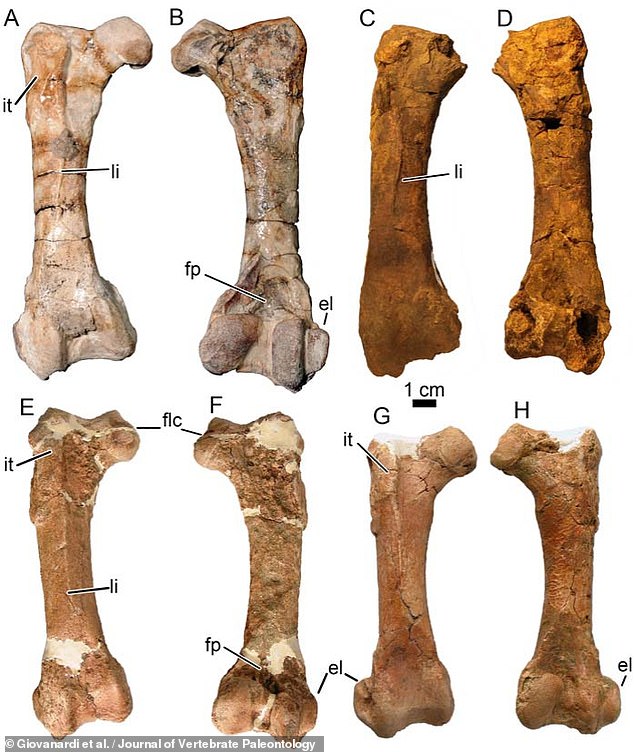 Researchers from Massey University and Connecticut’s Bruce Museum took 3D scans of the fossil and compared it with other birds to confirm it was a novel species. Pictured: fossilised femora (upper hindlimb bones) of K. waewaeroa collected from New Zealand

One of the students — Steffan Safey — was present both when the ancient penguin was discovered and during the mission to recover it from the ground.

‘It’s sort of surreal to know that a discovery we made as kids so many years ago is contributing to academia today. And it’s a new species, even!’ he said.

‘The existence of giant penguins in New Zealand is scarcely known, so it’s really great to know that the community is continuing to study and learn more about them.

‘Clearly the day spent cutting it out of the sandstone was well spent!’ he quipped. 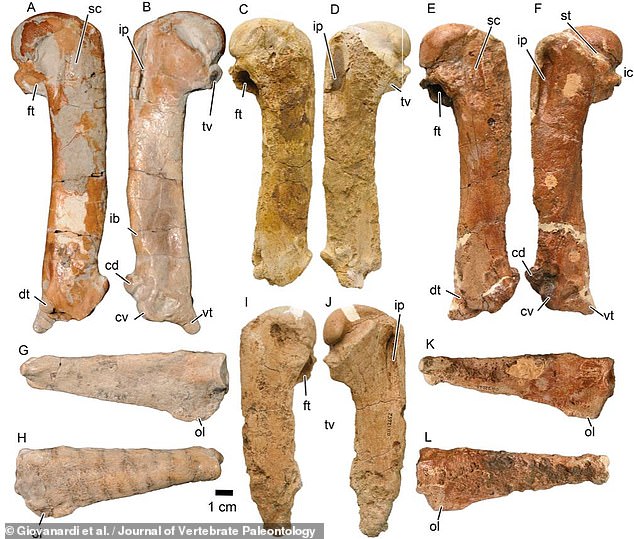 The team used their scans to 3D print a replica of the K. waewaeroa specimen for the members of the Hamilton Junior Naturalists Club who found the real fossil. The club had generously donated the authentic specimen to the Waikato Museum (Te Whare Taonga o Waikato) back in 2017. Pictured: a selection of fossilised bones from the wings of K. waewaeroa

‘It was definitely one of those slightly surreal things to look back on — absolute bucket list moment for me,’ said Alwyn Dale, who helped recover the fossil.

‘After joining the Hamilton Junior Naturalists Club there were some pretty iconic stories of amazing finds and special experiences – and excavating a giant penguin fossil has got to be up there!

‘A real testament to all the parents and volunteers who gave their time and resources to make unique and formative memories for the club members,’ he concluded.

‘It’s thrilling enough to be involved with the discovery of such a large and relatively complete fossil, let alone a new species!’ agreed plant ecologist Esther Dale, who was also present for the find but now resides in Switzerland.

‘I’m excited to see what we can learn from it about the evolution of penguins and life in New Zealand,’ she added.

The full findings of the study were published in the Journal of Vertebrate Paleontology. 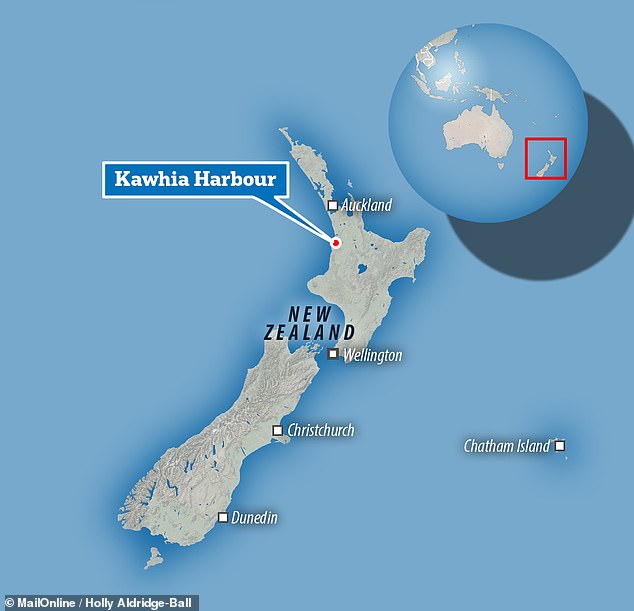 Penguins are birds, so they do have wings.

However, the wing structures of penguins are evolved for swimming, rather than flying in the traditional sense.

Penguins swim underwater at speeds of up to 15 to 25 miles per hour.

As adept swimmers, penguins spend a lot of time in the water.

Some penguins spend up to 75 percent of their lives in the water.

Like other birds, penguins do lay eggs and they raise their chicks on land.

It’s been said that penguins ‘fly in water’ in an environment that is 900 times denser than air.

They move their wings in a very similar way to birds flying in the air.