Global warming ‘danger limit’ of 2.7°F could be breached in just five YEARS – despite a drop in carbon emissions amid the Covid-19 pandemic, UN warns

Earth’s global warming ‘danger limit’ of 2.7°F (1.°5) could be breached in just five years, a new report has warned.

The pace of climate change has not been slowed by the global COVID-19 pandemic and the world remains behind in its battle to cut carbon emissions, the United Nations warned.

The pandemic caused only a temporary downturn in CO2 emissions last year and it was not enough to reverse the rising levels of greenhouse gases in the atmosphere, the World Meteorological Organization (WMO) said.

Reduction targets are not being met and there is a rising likelihood the world will miss its Paris Agreement target of reducing global warming to 2.7°F (1.5°C) above pre-industrial levels, the WMO said in its United in Science 2021 Report.

‘We have reached a tipping point on the need for climate action,’ said UN Secretary General António Guterres.

‘The disruption to our climate and our planet is already worse than we thought, and it is moving faster than predicted. This report shows just how far off course we are.’ 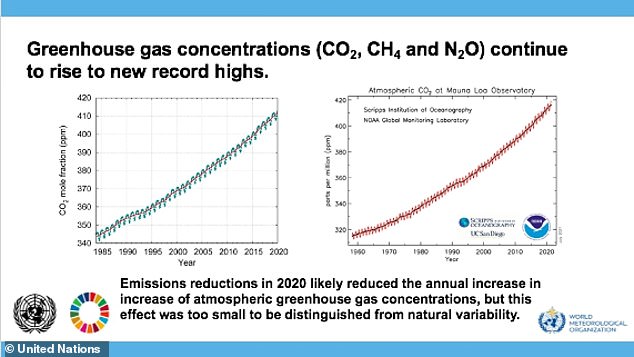 Concentrations in the atmosphere of the major greenhouse gases – CO2, methane and nitrous oxide – continued to increase in 2020 and the first half of 2021, the UN said

Climate change could force 216m people out their homes by 2050

Without immediate action to combat climate change, 216 million people could be forced to migrate to other parts of their country by 2050.

A new report from the World Bank modeled the impact of rising sea levels, water scarcity and declining crop productivity on six regions, concluding that climate migration ‘hotspots’ will emerge as soon as 2030.

The poorest parts of the world will be hit hardest, researchers said: Sub-Saharan Africa alone would account for 86 million of the internal migrants, with 19 million more in North Africa, the report showed,

South Asia would be home to 40 million internal migrants, and another 49 million in East Asia and the Pacific.

Such movements will put significant stress on both sending and receiving areas, straining cities and urban centers and jeopardizing development gains, the report said.

Concentrations in the atmosphere of the major greenhouse gases – CO2, methane and nitrous oxide – continued to increase in 2020 and the first half of 2021, the UN said.

‘Unless there are immediate, rapid and large-scale reductions in greenhouse gas emissions, limiting warming to 1.5°C will be impossible, with catastrophic consequences for people and the planet on which we depend,’ Mr Guterres said.

This includes Hurricane Ida, which recently cut power to over a million people in New Orleans and New York City, which was paralysed by record-breaking rain that killed at least 50 people in the region.

‘These events would have been impossible without human-caused climate change,’ he warned.

‘These changes are just the beginning of worse to come.’

The report comes before the 2021 United Nations Climate Change Conference, also known as COP26, which is scheduled to be held in the city of Glasgow between 31 October and 12 November 2021.

The pivotal meeting is expected to set the course of climate action for the next decade.

Mr Guterres added: ‘This report is clear. Time is running out.

‘For the 2021 United Nations Climate Change Conference in Glasgow, known as COP26, to be a turning point, we need all countries to commit to net zero emissions by 2050, backed up by concrete long-term strategies, and enhanced Nationally Determined Contributions which collectively cut global emissions by 45 per cent by 2030, compared to 2010 levels.

‘We need a breakthrough on protecting people and their livelihoods, with at least half of all public climate finance committed to building resilience and helping people adapt.

‘And we need much greater solidarity, including full delivery of the long-standing climate finance pledge to help developing countries take climate action.

‘There is no alternative if we are to achieve a safer, more sustainable and prosperous future for all.’