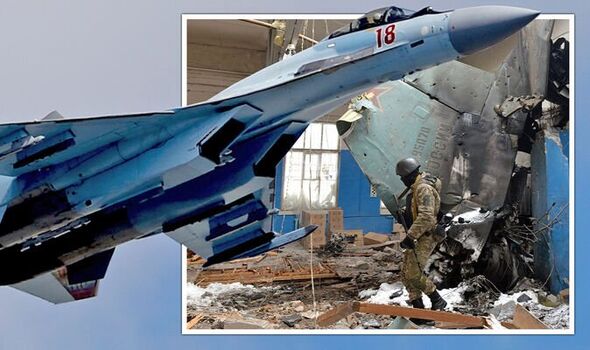 And their findings could make a “huge difference” in how the West conducts air-to-air combat with both Russia and China. Ukrainian troops shot down the Sukhoi Su-35S using short-range missiles two weeks ago. Specialists with the Ukrainian Air Force were able to retrieve vital and hitherto classified elements from its burnt-out remains and informed British intelligence.

The systems were transported to the Government’s Defence, Science and Technology Laboratory (DSTL) at Porton Down, in Wiltshire, where boffins, joined by two experts from the US Air Force, have spent the ten days examining them.

The initial assessment was deemed so promising that the systems have now been flown to Nevada, USA, for more forensic examination.

Dubbed “Flanker” by Nato, the fighter jet was conducting a so-called Suppression of Enemy Air Defences (SEAD) operation when it was unexpectedly shot down near Izium, some 75 miles from Kharkiv, in eastern Ukraine on April 3.

Its pilot was captured after safely ejecting.

The Flanker is Russia’s equivalent to the F-35 fifth generation multirole fighter which is currently used by the RAF and 14 other Nato nations – though it does not possess stealth technology.

And the prospect of Nato powers examining its sophisticated inner workings will cause consternation among air force chiefs in Russia, which operates 47 of them.

It has also sent shockwaves in China which, as Russia’s biggest defence partner, now boasts the world’s second largest fleet having signed a $2bn deal for 24 of the fighters in 2015.

Though the aircraft was heavily-damaged, sources say enough remained of the targeting system for detailed analysis.

This will be made easier by the discovery that the system – which, on paper, boasts the capability of spotting Nato’s stealth aircraft 350 miles away – has many similarities to the F-35s, making it more easy to fully explore.

The capture of tech is proving to be a spectacular own-goal for premier Vladimir Putin following the disastrous performance of Russian forces in the seven-week war.

Not only can it leave systems vulnerable to Nato counter-measures, but so too could it jeopardise future arms sales to supplicant countries – a vital revenue stream for cash-starved Russia.

Scientists at the DSTL are also examining remains of a T-90 – Russia’s most advanced battle tank, which fitted with an explosive reactive armour and a unique defensive Shtora-1 aids system- a Buk missile system, used to down Malaysian Airlines flight MH17 in 2014, and a Tor surface to air missile system.

India operates 2,000 T-90s of different variants as well as the Buk, while Iran used a Tor to shoot down Ukrainian flight 752 in January 2020.

But it is the £50m fighter jet which was the cause of most excitement.

Justin Bronk, air power and technology expert at the RUSI think tank, said: “ Any potential opportunity to examine the radar components or electronic warfare pods on the downed SU-35 would be valuable as, even damaged, such components can confirm or undermine existing intelligence assessments about how they work.”

Prof Alessio Patalano of the Department of war Studies at King’s College, London, said:”While this war has been predominantly a land campaign which has focussed on the least advanced and modernised elements of Russia’s military, we need to remember that Russia still has capabilities that contain the technological edge of great interest to the West.

“The SU-35S isn’t a simple drone – it is a sophisticated and very advanced piece of machinery which took decades to develop. Once its tech is stolen, it isn’t easily fixable and you can be sure that, depending on what the UK and US discover, Russia will be worried.”

And that concern will be felt beyond Moscow, he said

“Examining this system won’t just allow Nato to understand Russian capabilities. China has been worried since the beginning of operations in Ukraine precisely because this could happen,’ he added.

“Because China reverse engineers everything Russian sells it, it is likely to have included elements from the SU-35 in its other, indigenous, J-Class fighters such as its superior Chengdu J-20.

“The West doesn’t have much insight into Chinese technology so, in terms of command and control and long range capabilities, this is a unique opportunity which could, potentially, make a huge difference.

“If you know the frequency a system operates on, for instance, you can disrupt it.”