Robotic fabric that stiffens and relaxes in response to changes in temperature could be used to create adaptable clothing, self-erecting shelters and shape-changing machinery

Scientists have created a robotic fabric that stiffens and relaxes in response to changes in temperature, which could be used in emergency situations.

The material, developed at Yale University in the US, is equipped with a system of heat sensors and threads that stiffen to change the fabric’s shape.

Under heat changes, it can bend and twist to transform itself into adaptable clothing, shape-changing machinery and self-erecting shelters.

Video footage shows the material going from a flat, ordinary fabric to a load-bearing structure supporting a weight, a model airplane with flexible wings and a wearable robotic tourniquet that activates in response to damage. 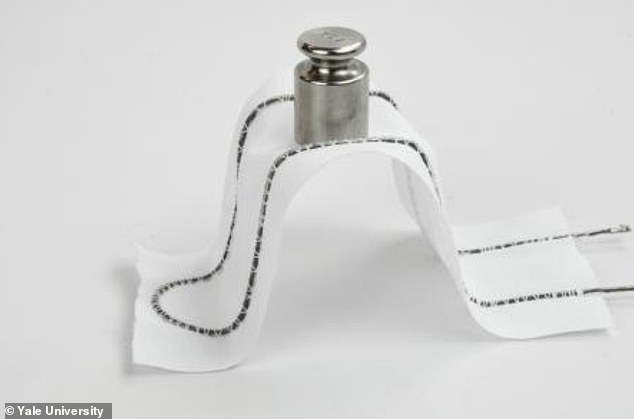 On-demand support fibres allow a robotic fabric to be bent or twisted and then locked into shape, or hold weights that would otherwise collapse a typical fabric

‘We believe this technology can be leveraged to create self-deploying tents, robotic parachutes, and assistive clothing,’ said Professor Rebecca Kramer-Bottiglio at Yale University.

‘Fabrics are a ubiquitous material used in a wide range of products, and the ability to roboticise some of these products opens up many possibilities.’

Researchers said the contraption retains all the characteristic qualities of general fabric, like flexibility, breathability and low weight, meaning it can be worn as normal.

To make the fabric move, the researchers used shape-memory alloy (SMA) wire – a class of alloys that is deformed when cold but returns to its pre-deformed shape when heated.

SMA is usually programmed into coils or meshes to generate a contracting motion, but for the robotic fabric this concept was adjusted slightly.

‘Instead of using the coil technique, we flattened the wires out into ribbons to give them a geometry much more suited to smooth bending motion, which is perfect for robotic fabrics,’ said study author Trevor Buckner at Yale University.

These so-called ‘support fibres’ are loaded with an epoxy embedded with particles of Field’s metal – an alloy that liquefies at approximately 144°F (62°C). 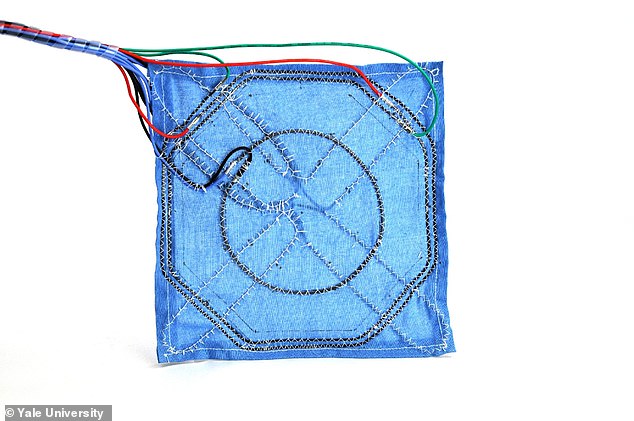 A square of the robotic fabric sheet, seen here laid flat on a surface. A similar square scaled-up could be a self-deploying shelter

After softening a selection of the fibres (the ‘legs’ of the robot), the fabric is able to prop itself up. At this point the table is able to support a 50g mass. When the legs are again softened, the table collapses under the weight of the load mass

These ‘on-demand’ fibres allow a fabric to be bent or twisted and then locked into shape, or hold loads that would otherwise collapse a conventional fabric.

‘Long fibres of this material can be sewn onto a fabric to give it a supportive skeleton that we can turn on and off,’ said Buckner.

‘Our Field’s metal-epoxy composite can become as flexible as latex rubber or as stiff as hard acrylic, over 1,000 times more rigid, just by heating it up or cooling it down.’

To create sensors that detect internal or environmental changes and allow the fabric to respond, researchers developed a conductive ink that can be painted directly onto the fabric. 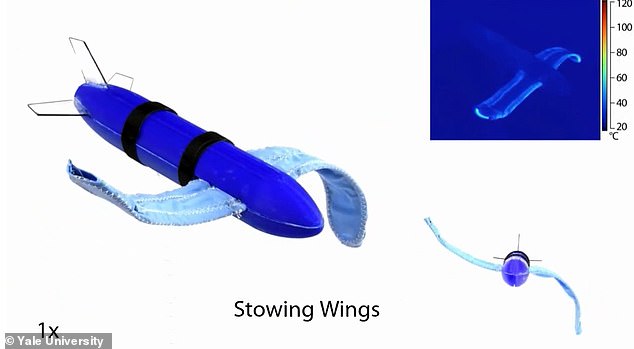 They also demonstrated  a small airplane with stowable or deployable fabric wings, although this is far from being implemented in aviation

The ink can sense the strain or bending of the fabric to help control and hold curvatures.

‘The sensors are visible, but don’t change the texture or breathability of the fabric, which is important for comfort in wearable applications,’ said Professor Kramer-Bottiglio.

By incorporating these fibres into conventional fabrics, the authors developed a robotic tourniquet and shape-changing napkin-sized robotic sheet that automatically folds into a box capable of supporting 50g of weight.

In the case of the tourniquet, it becomes activated when wires embedded in the fabric are cut with scissors or otherwise damaged, rather than heat changes.

The fibre would contract in response to damage, around a soldier’s arm in the battleground, for example. 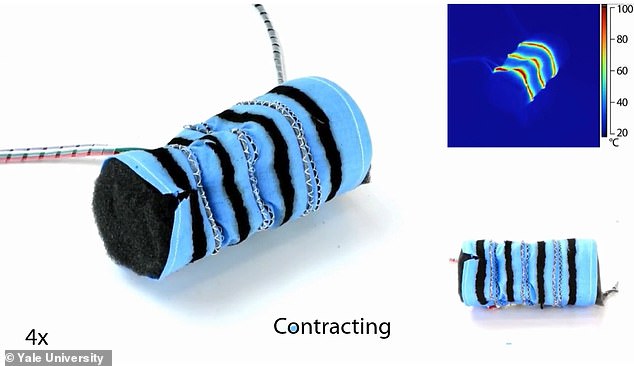 The fibre would contract in response to damage, around a soldier’s arm in the battleground, for example 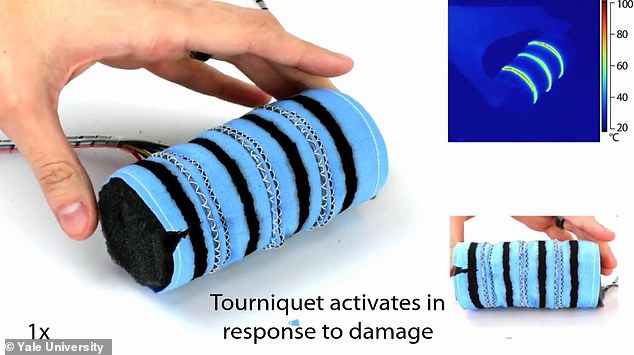 ‘The damage is detected as a broken circuit and an emergency response is triggered at the damage site,’ the scientists say in Proceedings of the National Academy of Sciences.

‘The fabric will compress and then hold that position without further power expenditure.

‘This type of responsive sleeve could potentially be used as a smart garment in military or exploratory environments, where automatic emergency measures could counteract life-threatening situations if medical aid is not immediately available.’

Established textile manufacturing processes could also even be tweaked for production of rolls of robotic fabric that could be used to make self-reconfiguring machinery.

‘We envision that the future will bring mass-produced rolls of robotic fabric, available for purchase, and programmable as required to fit varied tasks,’ say the scientists.

‘Self-reconfiguring machinery made from this material could bend and twist into new and complex shapes as needed and then collapse for compact storage.’

Smart fabrics are fabrics that contain new or innovative components that benefit the wearer.

Smart fabrics, or smart textiles, can reacts to outside stimuli such as heat, chemicals or magnetism.

They do not necessarily have an electronic component.

The Pratt Institute in the US has said smart fabrics have the ability to ‘communicate, transform, conduct energy and even grow’.