Certain parts of the planet were treated to a ring of fire eclipse today, June 21, as the celestial bodies danced through the sky. An annular solar eclipse, also known as a ring of fire eclipse, differs from a total solar eclipse as the Moon does not completely obscure the Sun as the Moon is farther away from us than normal, making it appear smaller.

As a result, the Sun is not totally eclipsed, leaving a ‘ring of fire’ around the edges.

Weather.com said: “Being smaller in size, the Moon fails to block all of the Sun’s light.

“Instead, Earth’s natural satellite only covers the Sun’s centre, leaving its outer edges visible and forming a ‘ring of fire’ effect in the sky.”

Those in Africa, Pakistan, India, and China were lucky enough to see the phenomenon, but the rest of the world has been treated to some stunning images. 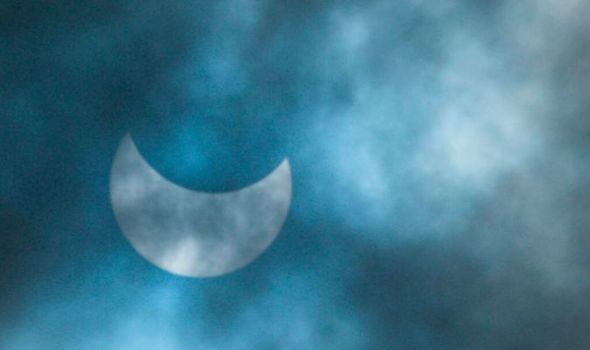 Social media is awash with mesmerising images of the eclipse, with billions viewing the spectacle.

One person from India shared her images on Twitter, stating: “Solar eclipse 2020 view from Kathmandu, for some moment sun looks like moon.”

Another person said: “The skies played romance with the Sun!#solareclipse seen from Delhi.”

Several videos were also shared of the moment the Moon crossed the Sun’s path, with one person stating: “An incredible video of the #SolarEclipse2020, shot by me today!

“Notice how clear the ring is! My childhood science textbook has come alive”.

Another said: “Here’s another shot of annular solar eclipse happening now over Chiayi City in Taiwan.”

Dr Alex Young, associate director for science in the heliophysics science division at NASA, revealed what causes this type of solar eclipse.

He said: “Annular eclipses are similar to total eclipses in that the Moon, Earth and Sun are aligned so that the moon moves directly in front of the Sun as viewed from Earth.

“But a total eclipse does not happen, that is the Moon does not completely block out the visible disk of the Sun because the Moon is farther away and so its apparent size in the sky is [slightly] smaller than the Sun.

“This means that a tiny ring of annulus of the solar disk is visible around the Moon.”