Riddle of RAF bomber on an Italian seabed is SOLVED: Crew of sunken WWII plane are finally identified 80 years after it plunged into the sea off tiny island near Sicily

An aircraft that crashed in the Mediterranean 80 years ago during World War II has finally been identified as a rare RAF bomber, experts say.

The plane, which came down 1,640 feet (500 metres) off the Italian island of Linosa in June 1942, is a Martin Baltimore bomber made in the US but operated by the RAF.

The wreck, which was discovered in 2016, is described by authorities as being in an ‘exceptional state of conservation’ and of ‘great historical and symbolic value’.

No other Martin Baltimore from the Second World War is known to exist in such a well-preserved state, they claim. 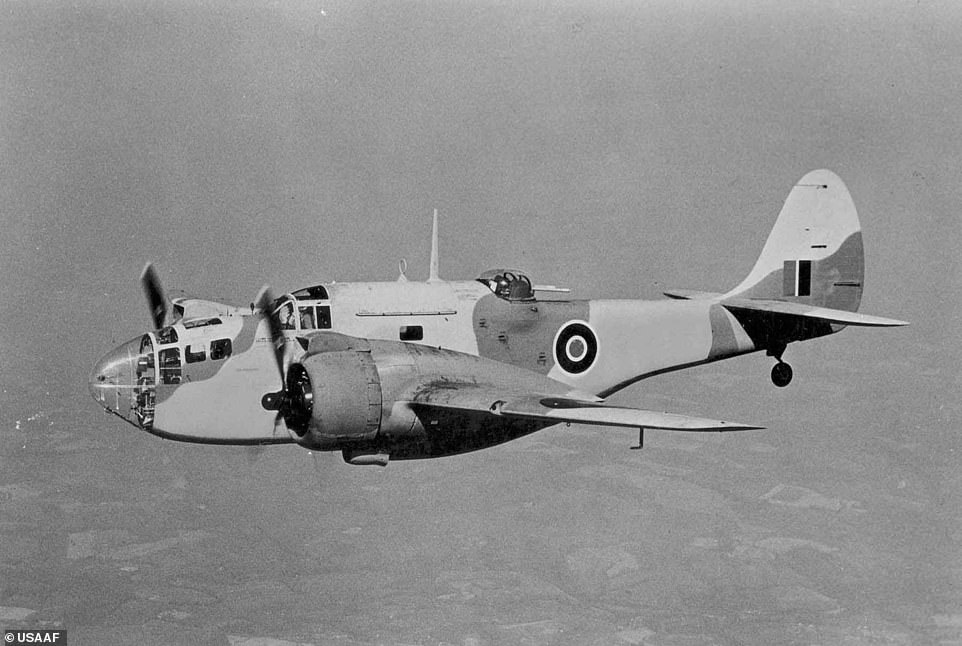 A Royal Air Force Martin Baltimore IV/V bomber. Most were delivered to Commonwealth countries, such as Canada and Australia, but a few were kept in the US. The one that sank in June 1942 was a Baltimore Mk II serial number AG699

The bomber left at 12.45am on June 15, 1942 from Luqa airport in Malta to observe the naval traffic in the area around the Pantelleria island.

But it came down off the Italian island of Linosa, likely because it was shot or its engines failed.

Onboard were four personnel:

Experts separately knew who the crew were on the plane, as well as the location where it was last seen, but until they had confirmed the identity of the wreckage they had been unable to piece all the information together.

The findings are based on a combination of war records, new surveys of the wreckage and eyewitness accounts, including from one local who saw the plane fall from the sky during its fateful reconnaissance mission 80 years ago.

They were announced by Soprintendenza del Mare, the Superintendence for the Cultural and Environmental Heritage of the Sea, a body for the Autonomous Region of Sicily.

‘The fog that has enveloped the identity of the wreck sunk in front of the “Fanalino of Linosa” has finally thinned out,’ it said in a statement.

‘To date there is no reported an aircraft wreck from World War II so well preserved in the Sicilian seas.’

The bomber took off at 12.45am on June 15, 1942 from Luqa airport in Malta to observe the naval traffic in the area around the Pantelleria island.

But it came down off the Italian island of Linosa, likely because it was shot or its engines failed.

The RAF light bomber is now about 280 feet (85 metres) below the water’s surface off of Linosa.

The existence of Martin Baltimore aircraft in such an excellent condition after surviving World War II and any subsequent dismantling is not known to date, said Soprintendenza del Mare.

In fact, just a handful of museums have only a few pieces of similar aircraft; in Greece there is a Martin Baltimore but it is semi-destroyed.

Experts say this particular Martin Baltimore (Mk II serial number AG699) is partially submerged in the sand but the wings and the tail are still raised above the seabed.

The wreck does have some damage, however. It has a crack half way along the fuselage and a small missing part of its left wing.

It was first found back in 2016 and filmed as part of a project on seabed mapping and habitat monitoring using a remotely operated vehicle (ROV).

Divers at the Capo Murro Diving Center in Syracuse returned to the wreck this year to carry out ‘substantial video documentation’.

‘Collaboration between local people, fishermen, divers and maritime heritage specialists has led to the discovery of an exceptional wreck,’ Alberto Samona, the official in charge of cultural heritage for Sicily, told the Telegraph.

According to Royal Air Force Commands, a forum for RAF researchers, Baltimore II AG699 had four personnel on board.

Sgt Greaves died on impact when the bomber hit the sea and was buried in the Medjez El-Bab War Cemetery in Tunisia.

The other three were rescued by local fishermen who rowed towards the wreck, although Sgt Purslow died in a prisoner of war camp in Wolfsberg, Austria, in December 1943.

Findings were announced by the Superintendence for the Cultural and Environmental Heritage of the Sea, a body for the Autonomous Region of Sicily

Superintendence of the Sea said it will continue to work tirelessly to research evidence of the past, including sunken wrecks dating from the two world wars

The wreckage reportedly floated for a few minutes before becoming submerged, which gave the fishermen a chance to save the three men.

The bomber is in an ‘exceptional state of conservation’ due to various fortuitous circumstances, including a soft ditching with the engines off, as evidenced by the integrity of the structure.

Also, the depth of the wreck and its distance from land has meant it’s been largely inaccessible by tourist divers and the use of sports equipment.

Superintendence of the Sea said it will continue to work tirelessly to research evidence of the past, including sunken wrecks dating from the two world wars.

Hikers stumbled across the wreckage of a plane that nosedived on a Scottish mountain while carrying 20 passengers in 1948.

Pamela Aitken and her friend Kathryn Gaffney, found mounds of twisted metal and engine fragments on Irish Law mountain in North Ayrshire, near the town of Largs, in March 2021.

But it was clear they weren’t the first visitors, as a ‘Ray Purchase’ scratched his name, the year 1971 and a smiley face on the side of one of the pieces of metal.

The wreckage is thought to be the British European Airways Flight S200P that plunged into the mountain on April 21, 1948, reported The Daily Record.

Twenty passengers were on board the short-haul flight from London-Northolt Airport to Glasgow-Renfrew Airport.

Miraculously, everyone on board survived the crash – even as the plane burst into a giant fireball.

Parts of the plane left on the hillside included fragments of the engine, landing gear and parts of the wings.

After the crash in which 13 people were injured, an investigation found it was caused by pilot error.