The elusive deep-sea creature was filmed by a team of researchers at a crushing depth of 2,500ft. Giant squids are notoriously hard to find and film, thanks in no small part to the depths they live at, and the very first one wasn’t caught on camera until 2004. But scientists have finally been able to lure one of these creatures out, using a jellyfish-like decoy, called E-jelly.

The decoy was specifically designed to imitate the glow of a jellyfish, which proved irresistible to the giant squid.

A bag of mahi mahi fish was also strapped to the decoy for some extra enticement.

The result is striking video footage of a 12ft-long Architeuthis dux emerging from the depths for a tasty morsel.

You can see in the black-and-white footage the squid slowly approach the decoy. 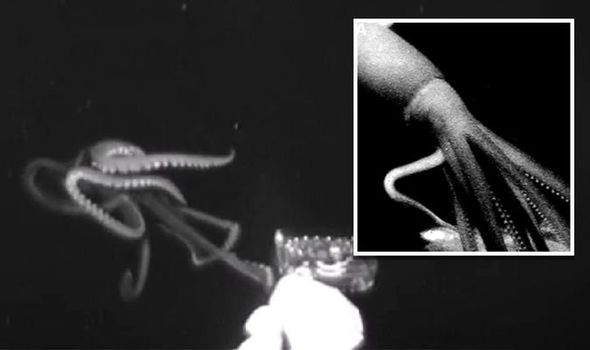 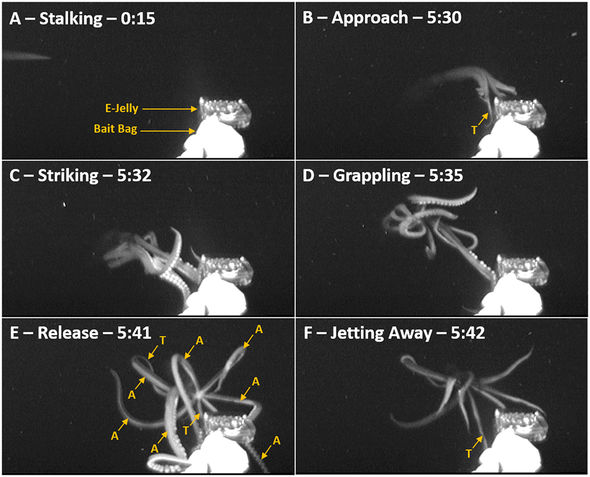 The spinning light on the decoy is the E-Jelly, which emits the sort of blue light a jellyfish would.

The squid then wraps its tentacles around the device thinking it’s about to have an easy meal.

Instead, the squid is forced to swim off in disappointment and with an empty belly.

The video also happens to mark the first time one of these animals was filmed in US waters.

The incredible encounter was described this week in Deep Sea Research Part I: Oceanographic Research Papers.

The study’s authors wrote: “The legend of the ‘Kraken has captivated humans for millennia, yet our knowledge of the large deep-sea cephalopods that inspired this myth remains limited.

“Conventional methods for exploring the deep sea, including the use of nets, manned submersibles, and remotely operated vehicles (ROVs), are primarily suited for studying slow-moving or sessile organisms, and baited camera-traps tend to attract scavengers rather than predators.”

The scientists worked around this problem by deploying the Medusa – a remote-controlled device designed to attract and film creatures at great depths.

A total of five Medusas were deployed in the Gulf of Mexico before the researchers struck gold. 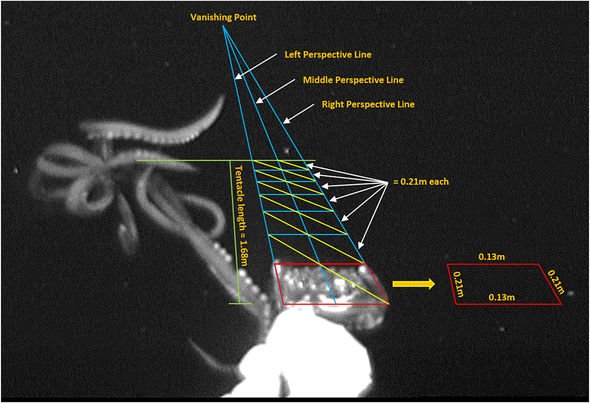 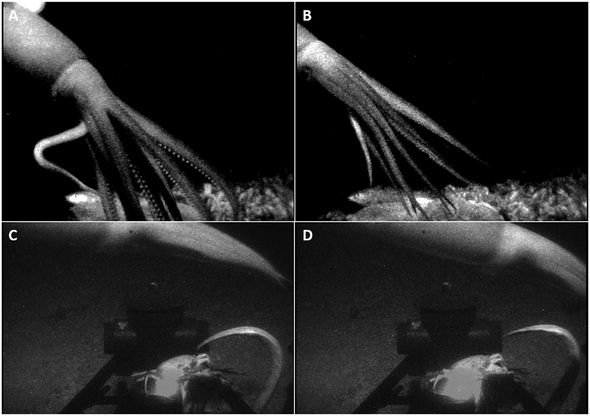 And though the giant squid was filmed in June last year, it wasn’t until now that the footage was shared with the public.

Sonke Johnsen, a professor at Duke University, and Edie Widder, CEO of Ocean Research and Conversation, described the moment they saw the beast.

They wrote in a blog post: “People quickly gathered around. We knew immediately that it was a squid.

“It was also big, but because it was coming straight at the camera, it was impossible to tell exactly how big.

“Quickly, those who could identify animals of this sort pulled out identification books, slapping them on the chest freezer like a mechanic in a hurry to find the off switch to a runaway engine.”

Giant squids have been known to grow up to 40ft in length but very little is known about how they live.

The new footage has shed some light on their behaviour, however, revealing they stalk their prey before going in for the kill.